Lyrics from just about every Motley Crue album. Enjoy!


Answer: Stick To Your Guns

"Red Hot" is from "Shout At The Devil" (1983). A very underrated song!
3. These lyrics are from what song? "My heart's in the country My feet's in the city with you All my friends are eatin' sushi"


Answer: You're All I Need

From "Girls, Girls, Girls" (1987). Nikki Sixx wrote this about his girlfriend that was cheating on him. If you read the lyrics, you will see how harsh they are.
5. What song is this from? "Her motor clean Way she moves across the floor The way she shakes her hips"

From "Dr. Feelgood" (1989).
6. What song is this from? "I've been a poet always tongue in cheek I've seen some scenes man you'd never believe And like a supercharged rocket ride You know they'd have gasoline if they had the time"

From "Decade of Decadence" (1991). This song was actually written about Nikki's first wife, Brandi, but Angela is her middle name.
7. What song is this from? "I am not alone in my head here But I'll gladly take the blame I'm a snot nosed nuclear sonic punk"

From "Generation Swine" (1997). This is the first album in six years with all four members back together.
8. "You click your heels three times imagination goes wild You can't analyze" This is the lyric to "Enslaved".

From the "Greatest Hits" album (1997). This was written when Tommy Lee was is jail. "Bitter Pill" was released on this album, too.
9. These are the lyrics to what song? "40 million records and going strong Never won a Grammy Still won't play along in Hollywood Like we should"

From "New Tattoo" (2000). Tommy Lee did not play on this.
10. What song is this from? "When she laughs She's got the power of a child in her eyes And when you cry now She'll hold you like a man's supposed to be held" 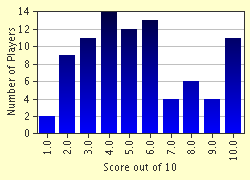 
Other Destinations
Explore Other Quizzes by Sleepyfreak02