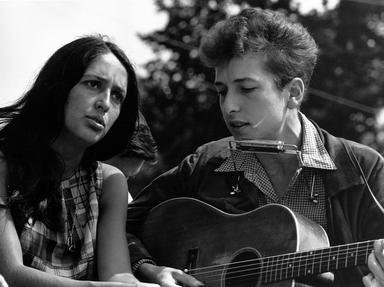 Every year my local oldies radio station (CKOC in Hamilton, Ontario) compiles a countdown of the top 500 oldies, based on listeners' votes. Here is a sampling of some of the songs from the '60s that made the 2004 list (not counted down in order).

Quiz Answer Key and Fun Facts
1. What song was #259 on the countdown? "I can't stop this feelin', deep inside of me. Girl, you just don't realize what you do to me. When you hold me, in your arms so tight, You let me know everything's all right."


Answer: Hooked on a Feeling

Like so many others, B.J. Thomas began singing in his church choir. Although more of a presence on the country hit list, Thomas has had some pretty good cross-over hits. "Hooked on a Feeling" peaked at #5 on the pop charts, and sold over a million copies.
"Stuck on You", by Elvis Presley, was #109 on the countdown, "Game of Love", by Wayne Fontana and the Mindbenders, was #486, and "Sugar, Sugar", by the Archies, was #41.
2. What song was #121 on the countdown? "Now if you feel that you can't go on, Because all your hope is gone. And your life is filled with confusion, And happiness is just an illusion, And your world around is tumblin' down. Darling, reach out."


Answer: Reach Out, I'll Be There

The Four Tops started singing together at a friend's birthday party in 1954. They liked the sound so much that they continued to sing together. Written by Holland-Dozier-Holland "Reach Out" was their first number one hit, which didn't come until 1966.
Also by the Four Tops, "I Can't Help Myself" was #77 on the countdown, and "It's the Same Old Song" was #233. "Sealed with a Kiss", by Brian Hyland, was #44 on the countdown.
3. What song was #27 on the countdown? "You know that it would be untrue, You know that I would be a liar, If I was to say to you, Girl, we couldn't get much higher."

Off of their debut, self-titled album, "Light My Fire" was a number one hit for the Doors. It also contains the controversial line "we couldn't get much higher", that Morrison was asked not to sing during their performance on "The Ed Sullivan Show". Morrison sang it anyway, which resulted in them being banned from future appearances on the show.
"This Magic Moment", by Jay and the Americans, was #467 on the countdown, "Hold Me, Thrill Me, Kiss Me", by Mel Carter, was #480, and "Wild Thing", by the Troggs, was #222.
4. What was song #328 on the countdown? "Every time I think, That I'm the only one who's lonely, Someone calls on me. And every now and then, I spend my time in rhyme and verse, And curse those faults in me. And then __________."

When Louis Armstrong was 12, he fired a pistol at a New Year's Eve party, and was sent to a detention home. Here, as part of his rehabillitation, he received the music lessons that would change his life forever. Satchmo's long and distinguished music career ended with his death in 1971, at the age of 70. "Wonderful World", which was one of his all-time biggest hits, was released in 1968.

The song's popularity had a resurgence in 1987, when it was used in the Robin Williams' hit movie, "Good Morning Vietnam".
6. What song was #313 on the countdown? "Does he love me, I wanna know. How can I tell if he loves me so? (Is it in his eyes?) Oh no you'll be deceived. (Is it in his sighs?) Oh no he'll make believe. If you wanna know, if he loves you so, It's in his kiss."

Betty Everett started playing piano and singing in church when she was 9 years old. Although she had many R&B hits, she only ever scored big on the Pop charts with this one, catchy tune.
"Come See About Me", by the Supremes, was #110 on the countdown, "Do Wah Diddy Diddy", by Manfred Mann, was #20, and "Da Do Ron Ron", by the Crystals, was #108.
7. What song was #230 on the countdown? "Tonight's the night, I've waited for, Because you're not a baby anymore. You've turned into the prettiest girl I've ever seen..."

Trained in classical piano, Neil Sedaka was practicing piano for five hours a day when he was only eight years old. Written by Sedaka and Greenfield, "Happy Birthday Sweet Sixteen" peaked at #6 on the charts. Sedaka was a founding member of the group The Tokens, who had a huge hit with "The Lion Sleeps Tonight", although Sedaka had left the group by then.
"Sweet Caroline", by Neil Diamond, was #474 on the countdown, "Happy Together", by the Turtles, was #14, and "Poetry in Motion", by Johnny Tillotson, was #391.
8. What song was #394 on the countdown? "'Cause I'm leavin' in the morning, And I must see you again. We'll have one more night together, 'til the morning brings my train, And I must go, oh, no, no, no! Oh, no, no, no! And I don't know if I'm ever comin' home."

Written by Tommy Boyce and Bobby Hart, "Last Train to Clarksville" was the first number one hit for the Monkees on the U.S. charts. Bert Schneider and Bob Rafelson created the group for a television show that was inspired by the Beatles movie "Hard Day's Night". The song had some social relevance, because Clarksville was the leaving point for troops headed to Vietnam, a point that many young people listening to the song did not know.
Also by the Monkees, "I'm a Believer" was #42 on the countdown, "Daydream Believer" was #165, and "Valleri" was #448.
9. What song was #187 on the countdown? "Where have you gone, Joe DiMaggio, A nation turns its lonely eyes to you (Woo, woo, woo). What's that you say, Mrs. Robinson? Joltin' Joe has left and gone away? (Hey, hey, hey...hey, hey, hey)."

Written for the 1968 movie "The Graduate" (which starred Dustin Hoffman), "Mrs. Robinson" took home 2 Grammys for Simon and Garfunkel. Originally billing themselves as Tom and Jerry, Paul Simon and Art Garfunkel had been performing and recording together since they met in public school.
"I Am a Rock", also by Simon and Garfunkel, was #35 on the countdown, "When Will I Be Loved", by the Everly Brothers, was #483, and "Lay Lady Lay", by Bob Dylan, was #427.
10. What song was #2 on the countdown? "Pretty woman, walking down the street. Pretty woman, the kind I like to meet. Pretty woman. I don't believe you, you're not the truth. No one could look as good as you. Mercy."

Roy Orbison asked for a harmonica for his 6th birthday, but was given a guitar instead. His father taught him how to play it, and he had his first American number one song with "Running Scared".
Written by Roy Orbison and Bill Dees, "Pretty Woman" is arguably Orbison's most recognized song ever. It had a resurgence with the release of Garry Marshall's 1990 movie "Pretty Woman", which starred Julia Roberts and Richard Gere.
Source: Author skunkee 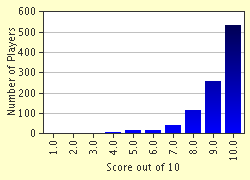