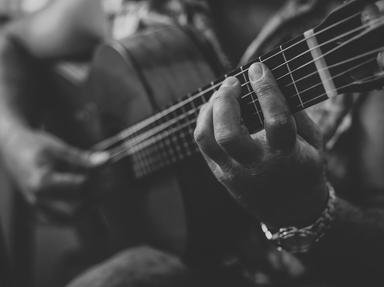 This quiz tests whether you can match the song with the artist. All songs start with the letter H, and I've included the year the song was released to avoid confusion. Good luck!

Birmingham-based English band Duran Duran released "Hungry Like the Wolf" on their second album, "Rio," in 1092. That year, they toured with Blondie and were so popular that Princess Diana indicated Duran Duran was her favorite band. The song was in heavy rotation across the world, and Billboard ranked it at number 17 on their US Hot 100 that year. Band members have indicated it was inspired by traditional the folk tale, "Little Red Riding Hood."
2. "Hard to Handle" (1990)

The year 1990 is an important part of this question, as the song "Hard to Handle" was written by Otis Redding in 1968. Our version is one of the most notable covers, released in 1990 by The Black Crowes out of Marietta, Georgia. It was a track on the band's first studio album, "Shake Your Money Maker." The band was founded by brothers Chris and Rich Robinson when they were in high school.

The theme of "Hard to Handle" seems to be a man trying to convince a woman to give him a chance.
3. "Hotel California" (1977)

"Hotel California" by the band Eagles is one of the most famous songs of all time, especially its guitar coda. Eagles members have indicated the song is about the freaky nature of California, which impressed all of them as they were from other states before they moved to Los Angeles. A more general interpretation is the transformation from innocent to experienced.
4. "Hello" (2015)

London-born Adele burst onto the music scene when she was barely 19 years old. Her talent was praised by critics and fans alike and she continued to put out hit music. "Hello" was the lead single on her third studio album, "25," released in 2015. It reached number one in nearly every country in which it was released, including the U.S. and the U.K. Adele has indicated the the song is about surviving the growing pains of late teens and early 20s and breaking through to the other side of maturity.
5. "Hit Me With Your Best Shot" (1980)

Pat Benatar is the small performer with the big voice; the five-foot-nothing Brooklyn native trained in opera before moving into rock and roll. "Hit Me With Your Best Shot" was from her second album, "Crimes of Passion," and it charted in the U.S., Canada, and Australia. The song is considered an anthem to human strength.
6. "Hey Jude" (1968)

Few songs are as acclaimed as "Hey Jude" by the Beatles. The backstory is well known -- Paul McCartney wrote it for Julian Lennon, the young son of John and Cynthia Lennon, while his parents were divorcing. Rolling Stone magazine ranked the song as number eight on the list of "500 Greatest Songs of All Time."
7. "Hot for Teacher" (1984)

The album "1984," released that year, was Van Halen's sixth. "Hot For Teacher" was the fourth track released on that album, and was known for its complex drum part as well as its music video, which was in high rotation on MTV at the the time. The meaning of the song is not particularly subtle - the singer is romantically interested in his teacher. Van Halen was launched in Pasadena by brothers Eddie and Alex Van Halen.

They were born in the Netherlands but moved to California when they were young.
8. "Hollaback Girl" (2004)

Gwen Stefani was the lead singer of No Doubt, a band started by her older brother Eric. In 2004, she released her first solo album, "Angel. Music. Baby.," which included the single "Hollaback Girl." She wrote the song in response to being called a musical cheerleader; the song expressed her individual strength and creativity as a leader, not a follower. Critics had mixed reviews of the song, but it was the first single to sell one million digital downloads.
9. "Hips Don't Lie" (2005)

"Hips Don't Lie" was originally titled "Lips Don't Lie" and was written by Wyclef Jean for his band, the Fugees. When the Fugees passed on it, Jean and Shakira re-wrote it together for her seventh studio album. Shakira has reported that she knows when a song is ready when she can't help dancing, and that this song describes the process of creating and evaluating her work.

It was nominated for multiple Billboard Music Awards and its video won the Best Choreography in a Video at the MTV Video Music Awards.
10. "Happy" (2013)

"Happy" appeared on the soundtrack of "Despicable Me 2" and was written and performed by native Virginian Pharrell Williams. The song was nominated for an Oscar for Best Original Song. Williams produces, writes, raps, and sings, and has cited his respect for David Bowie, Michael Jackson, Stevie Wonder, and Marvin Gaye.
Source: Author PootyPootwell


Other Destinations
Explore Other Quizzes by PootyPootwell