Springsteen Out in the Streets Quiz

Bruce Springsteen mentions many a street or road or avenue in his songs. I'll provide you with the street name, you name the song.

"Born to Run" (1975) was proposed to the New Jersey legislature to become the official song of the State of New Jersey. It was also the name of his third studio album.
2. "And I'm driving a stolen car down on Eldridge Avenue"

"The River" (1980) was Bruce's first release of a double album. In 1992 he released his next "double album", this time as a pair of albums under different titles, "Lucky Town" and " Human Touch"
3. "As my pa steers her slow out of the lot for a test drive down Michigan Avenue"

This song appears on "Nebraska" (1982), Springsteen's first acoustic album. Springsteen wrote this of him as a child
4. "Cause I'm stuck in traffic down, here on 53rd Street"

This upbeat song was originally intended to appear on his "Darkness on the Edge of Town" (1978) album where Springsteen felt it was a bad fit. It was later released on the double album, "The River"(1980).
5. "The dogs on Main Street howl"

Although the lyrics have nothing to do with Chuck Berry's "The Promised Land", Springsteen admired the Hall of Fame Artist and used the title for this working man's anthem. In 1989 Springsteen was recruited by Berry to write the forward to the Hall of Famer's autobiography, "Chuck Berry: The Autobiography" (1989).
6. "As the wizards play down on Pinball Way..."

Although it was not in existence in 1973 when Bruce's second album,"The Wild, Innocent and the E Street Shuffle" was released, there now exists on the Boardwalk in Asbury Park, NJ the Silverball Pinball Museum where pinball wizards can play to their heart's content for an hourly fee.
7. "I met Wanda when she was employed behind the counter at the Route 60 Bob's Big Boy"

Originally entitled "Wanda", "Open All Night" is one of the singles released from the "Nebraska"(1982) album which did not have any songs that charted.
8. "Now Main Street's whitewashed windows and vacant stores"

Bruce Springsteen is associated with Asbury Park, NJ, a seaside town where The Stone Pony Bar is noted for hosting Bruce many times during his career often showing up to perform with local performers. Born in Long Branch, NJ, his hometown is Freehold, NJ.
9. "Madison Avenue's claim to fame in a trainer bra with eyes like rain"


Answer: "Girls in Their Summer Clothes"

Jon Landau, Springsteen's long time manager, described this song as having a "little bit of a Pet Sounds-type feeling mixed in with the sound of the E Street Band."
Source: Author misterwonka 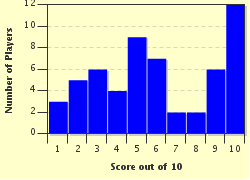 
Other Destinations
Explore Other Quizzes by misterwonka