This is the Chilis first studio recorded double album.

Quiz Answer Key and Fun Facts
1. "Get the message on Flea's fists" is from what song?

Flea, the bassist, has LOVE tattooed on his fists!
2. "Blood Flowers in the Kitchen, Signing off and Winding Down" this line is from what song?


Answer: Death of A Martian

This line is in the second verse!
3. "We gonna rock it to Ramones in the city of Pomona" is a line from what song?

This line is in the first verse!
4. "Deep beneath the cover of another perfect wonder" is a line from what song?

This song was number 53 on the UK i-tunes best seller list before it had been released.
5. In what song do they mention "The Rolling Stones"?

While recording the guitar solo for this song John Fruscainte messed it up in the middle of playing. But it turned out to be better then what he had origially written! So the solo you hear in the song was actually an accident!
6. Which of these lines is in "Especially in Michigan"?


Answer: White clouds I'm in a mitten full of fishermen

"Chitty citty baby when your nose is in the nitty gritty" is from "Tell Me Baby". "I turn to Cuba then Aruba then the Dominican" is from "Turn It Again". "Slow down the road to my back 40" is from "She Looks To Me".
7. What line is not on "We Believe"?


Answer: Simple soldier hand it over, stop and read what you just wrote her

"Simple soldier hand it over, stop and read what you just wrote her" is from "21st Century"!
8. Which of theese lines is not on "Make You Feel Better"?


Answer: We could take a walk into the apple orchard by the school

"Wet Sand", "21st Century", "Warlocks" and "Snow" are all names of songs!
10. "The Chilis" headlinded the Oxygen 2006 Summer Festival in Ireland during their "Stadium Arcadium" tour.

They played at Punchestown Racecourse Co.Kildare on the 9th of July 2006 for the oxygen festival!
Source: Author JohnnyTheR.S 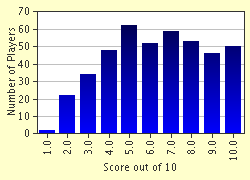 
Other Destinations
Explore Other Quizzes by JohnnyTheR.S