Do You Know Dali? Trivia Quiz

How much do you know about the eccentric artist, Salvador Dali? Let's find out!

Share on Facebook
Share on Twitter
Share by E-Mail
Author
gillimalta
Time
3 mins
Type
Multiple Choice
Quiz #
292,297
Updated
Dec 03 21
# Qns
10
Difficulty
Average
Avg Score
7 / 10
Plays
855
This quiz has 2 formats: you can play it as a or as shown below.
Scroll down to the bottom for the answer key.

In Figueres, Catalonia on May 11th, 1904 to be precise!
2. Which of these most accurately describes Dali's style of art?

Dali said, of his style, "I do not paint a portrait to look like the subject, rather does the person grow to look like his portrait."
3. One of Dali's most famous pieces is sometimes known as 'Soft Watches' or 'Melting Clocks'. What is it actually called?


Answer: The Persistence of Memory

This work epitomises Dali's theory of 'softness' and 'hardness' which was central to his thinking at the time (1931).
4. Salvador Dali designed the logo for which well known confectionery company?

He designed the distinctive lollipop logo in 1969! In 1968, Dali filmed a television advertisement for Lanvin chocolates.
5. What was strange about the telephone which Dali sculpted in 1936?


Answer: It had a lobster on it

Lobsters and telephones had strong sexual connotations for Dali- he drew close analogies between food, communication and carnal desires. This sculpture was made for Edward James, a well known collector of surrealistic art.
6. A man's face, made up of statues appearing to be the Venus de Milo, his hat and cape made up of a swarm of flies and a dalmatian dog near a pool of water. This famous Dali artwork is titled

This painting has extraordinary proportions - 4x3 metres and is displayed at The Salvador Dali Musuem in Saint Petersburg, Florida. (Trust me when I tell you that it is amazing!)
7. Whose lips were the models for Dali's famous wood and satin sofa?

The iconic, 1937 lip-shaped sofa was, indeed, inspired by Mae West with whom Dali was fascinated. He had previously painted 'The Face of Mae West' in 1935.
8. In 1929, Dali met and fell in love with Gala, a Russian emigré who was already married to a surrealist poet. What was his name?

Gala and Paul had a daughter named Cecile born in 1918. Gala loathed being a mother, mistreating and ignoring her child for most of her life.
9. What was the title of Dali's last painting?

This artwork was completed in 1983. It is the final piece in a series based on Rene Thom's catastrophe theory and is displayed at the Dali Theatre and Museum in Figueres.
10. When did Salvador Dali die?

On January 23rd, 1989, Salvador Dali died of heart failure. He bequeathed his estate to the Kingdom of Spain and the Independent Region of Catalonia.
Source: Author gillimalta

This quiz was reviewed by FunTrivia editor bloomsby before going online.
Any errors found in FunTrivia content are routinely corrected through our feedback system.
Most Recent Scores
Jan 31 2023 : bernie73: 6/10
Jan 07 2023 : dmaxst: 6/10 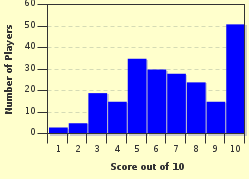 
Other Destinations
Explore Other Quizzes by gillimalta