Test yourself! Take this The Life of Salvador Dali Quiz | People

Salvador Dali was one of the most influential artists of the twentieth century, and certainly the most eccentric. I think he best summed himself up when he said, 'The only difference between myself and a madman is that I am not mad'.

Figueres is in the Catalonia region of Spain, near Barcelona. His body is interred at the Teatro-Museo Dali in Figueres, a museum Dali himself designed and created. Oh, by the way he was born in 1904, and died in 1989.
2. What was the given name of both Dali's father and brother(who died in infancy)?

Early in his life, Dali had a severe identity crisis because of this. He was born exactly nine months after his brother's death, and his parents actually told him that he was the reincarnation of his dead sibling. Throughout most of his life he believed that he was only a part of one {personality;} what he called the four Salvadors, his father, his dead brother, himself, and the Christian messiah, Jesus Christ (Salvador in Spanish).

This goes a long way towards explaining Dali's eccentric personality.
3. Before he settled on Surrealism, what artistic style did Dali experiment with?

Dali showed great talent in these all of these styles before he was ever exposed to surrealism. Had he died in the late 1920's he may well have been remembered as one of the great cubist painters, on a par with Picasso and Braque.
4. Dali was strongly influenced by the writings of...?

In the years 1928 and 1929, three things happened in Dali's life that profoundly changed him and his art. The first was that he was exposed to Freud's theory of the unconcious mind, as presented in his book, 'Interpretation of Dreams'. The second was that he met and began working with a group of artists and writers in Paris, known as the 'Surrealists', led by the poet Andre Breton. And the third was ...see next question.
5. What was the name of Dali's wife?

Gala was Russian by birth and nine years older than Salvador. They met on the beach at Cadaques, Spain in 1929, where they both were vacationing. At the time they met, Gala was married to the poet Paul Eluard, but they immediately started a romantic relationship, and within a few months, they were living together.

She eventually divorced Eluard, and married Dali in 1934. Dali used his wife as a model for many of his paintings. A couple of my favorites of these are 'Galacidalacidesoxyribonucleicacid' and 'Leda Atomica'.

By the way, if you can pronounce that first one, you're doing better than I can! Gala was a major force in encouraging Dali to establish and cultivate his flamboyant public image.
6. Who loaned Dali the five hundred dollars he needed to make his first trip to New York in 1934?

Dali and Picasso were friends on and off for most of their lives. They first met in 1925 when Picasso, already famous at the time, came to see Dali's first solo exhibition in Barcelona. Apparently, he liked what he saw. Picasso also booked and paid for Dali's passage to America in 1940, just weeks before the Nazis rolled into France.

During Dali's second trip to the United States in 1936, he made the cover of Time magazine. Incidentally, Dali and Walt Disney did have a connection. In 1948 Dali worked on a series of drawings for an animated feature called 'Destino' that the Disney studio was developing. The project was shelved, however, when uncle Walt decided the tone of the piece was a little too dark for his audience. Bummer!
7. Who did Dali support during the Spanish Civil War?


Answer: He avoided supporting either side

Much later, after World War II, Salvador Dali became a staunch Roman Catholic and a supporter of Franco.
8. What did Dali wear to the opening of the London Surrealist exhibition in 1936?

That's right, a diving suit, complete with brass helmet and lead boots. He loudly proclaimed that this unweildy costume was the source of his creative energy. Dali was a shameless self promoter, he never missed an opportunity to shock or bemuse his public.

This famous incident was typical of Dali's outlandish and eccentric behavior. He was probably more concerned with moulding his public persona than any other artist of the twentieth century.
9. What Hitchcock thriller did Dali have a hand in?

Dali designed the sets used in the dream sequence of 'Spellbound' in 1946. I don't have any information on how he and Hitch hit it off, but I'll bet it was pretty interesting!
10. With what filmmaker did Dali collaborate in making 'Un Chien Andalou' (An Andalusian Dog), and 'L'age d'or' (The Golden Age)?

Dali and Bunuel had known each other since their art school days in Barcelona. I've seen 'Un Chein Andalou', and I must say that some of the images presented are particularly disturbing. I won't go into details here, but let's just say it ain't exactly 'Mary Poppins'. Released in 1930, 'L'age d'or' was banned in Spain for 49 years because of its anti-Catholic message.

It is considered by many film historians to be a ground breaking masterpiece.
11. Later in life, Dali made a reconciliation with his Catholic faith. He even had audiences with popes Pius XII and John XXIII. Many of his later works had a religious theme. Which one of these is not a work by Dali?


Answer: Daniel in the Lion's Den

All of these were painted after 1940, a period in which Dali tried to stress what he called the 'classical' aspects of his art. By the way, 'Daniel in the Lion's Den' was painted by Peter Paul Rubens, the sixteenth century Flemish master, you know, as in Rubenesque.
12. This painting, many feel it's his most famous and recognizable work, depicts melting timepieces on a cold and open landscape.


Answer: The Persistence of Memory

This painting is the seminal work of Dali's career. It is at once both beautiful and grotesque. A perfect blend of stark realism and dreamlike fantasy.
13. With what comedy team did Dali collaborate on a motion picture screenplay?

The screenplay never made it to production, but Dali remained friends with Harpo for many years after this.
14. What did Dali call his peculiar creative method?

This method involves entering an altered state of conciousness, such as dreaming or meditation, and then once out of the altered state being able to remember and reproduce images created by the subconcious mind. Dali said that all humans engage in this at some level.

It's the same process we use when looking at objects such as clouds, and being able perceive other unrelated shapes and images. Some of Dali's most famous works employ this type of 'double imaging'. My favorites of these include 'The Hallucinogenic Toreador' and 'Gala Contemplating the Mediterranean Sea Which at Twenty Meters Becomes a Portrait of Abraham Lincoln-Homage to Rothko'.

This aspect of Dali's art is what I think is the reason for his universal appeal. All of us can remember images created solely by our own minds, Dali just took the extra step and produced them in crystal clarity in the form of paintings.
15. King Juan Carlos of Spain elevated Dali to nobility in 1982 by bestowing upon him this title.

The Chateau Pubol is a castle that Dali purchased in 1967, renovated, and gave as a gift to his wife, Gala. She moved into the castle to live separately from Dali in 1969, and died there in 1982 at the age of eighty-eight. Dali rarely visited Gala in her castle, he was only allowed there by formal invitation.

After Gala's death, Dali moved to the castle and lived there alone until 1984 when he was severely burned in an fire. He created his last paintings here in 1983. After this, he moved to the Torre Galatea, next door to his museum in Figueres, and lived there as a recluse until his death in 1989. If you are interested in in seeing some of Dali's work, there are many sites dedicated to him on the web.

The best one I have found is at www.dali-gallery.com It has over 1500 images of his paintings, drawings, and objects.
Source: Author tim10001 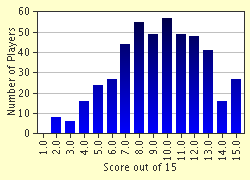 
Other Destinations
Explore Other Quizzes by tim10001