Salvador Dali was the greatest artist of the surrealist movement and one of the greatest masters of art of the twentieth century.

Quiz Answer Key and Fun Facts
1. In what year was Salvador Dali born?

Salvador Felipe Jacinto Dalí was born in Figueres (formerly Figueras), Spain, on May 11, in the district of Girona in Catalonia, near the border with France. He was the son of Salvador Dalí y Cusi, a notary, and Felipa Domčnech.
2. Dali studied at the Royal Academy of Art in 1921. Where is it located?

Dali was expelled twice and never took his final exams. His opinion was that he was "more qualified than those who examined him". In 1924 Dali continued his studies at the Metaphysical School created by Giorgio de Chirico and Carlo Carra.
3. In what year did Salvador Dali first travel to Paris?

It was here that he first met Spanish painters Pablo Picasso and Joan Miro.
4. What nationality was Gala, Dali's wife?

She was also 10 years older than Dali, and still married to Paul Eluard when they first met.
5. At what age did Dali have his first public exibition?

It was held in a museum that would later be named "Dali Museum-Theatre" in Figueres, Spain. It was organized with the backing of his father.
6. In 1949, Dali's sister wrote a book called "Dali as Seen by His Sister". What was her name?

Salvador and Ana Maria were very close, particularly after the death of their mother in 1921. Ana Maria was his only female model until his wife Gala replaced her in 1929.
7. In what year was Dali forced to retire due to palsy, a motor disorder that caused a permanent trembling of his hands?

He was not even able to hold a paintbrush, and with Gala's death two years later in 1982, he fell into a deep depression.
8. What is the name of the castle that Dali moved into shortly after Gala's death in 1982?

He remained there until a fire broke out as he lay in bed, he suffered severe burns and as a result required a pacemaker two years later.
9. In 1940, where did Dali flee in order to avoid draft into World War II?

He became a permanent resident and held many sucessful exhibitions in New York.
10. Salvador Dali died in 1989 of what cause?

He died May 11, 1989 while living in the tower of his own museum, in Figueres, Spain.
Source: Author cattt 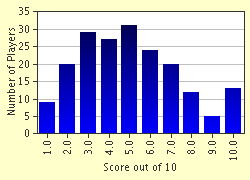 
Other Destinations
Explore Other Quizzes by cattt