Elizabeth Regina: The Life of Elizabeth I Quiz

Elizabeth I, was not only a great Queen of England, but to my mind, also one of the greatest monarchs in History. She is another speciality of mine. Enjoy!

Share on Facebook
Share on Twitter
Share by E-Mail
Author
DarcyUK
Time
8 mins
Type
Multiple Choice
Quiz #
97,865
Updated
Dec 03 21
# Qns
25
Difficulty
Difficult
Avg Score
12 / 25
Plays
2154
This quiz has 2 formats: you can play it as a or as shown below.
Scroll down to the bottom for the answer key.

Quiz Answer Key and Fun Facts
1. When was Elizabeth born?

Born at 3pm at Greenwich Palace, the baby Elizabeth had inherited her mother's (Anne Boleyn's) coal-black eyes and her father's (Henry VIII's) fair skin.
2. How old was Henry VIII when his second daughter was born?


Answer: Church of the Observant Friars

Elizabeth was christened on 10th September 1533, the usual venue for Royal christenings was the Chapel Royal, but on this occasion was swapped for the Church of the Observant Friars.
4. Who was her first Lady Mistress?

Elizabeth's father recognised Lady Bryan as a baroness.
5. Who was appointed her governess, when Elizabeth was 4 years of age?

Catherine, better known as Kat, remained as a constant companion to Elizabeth. She became Kat Ashley, when she married John Ashley.
6. At the age of ten, after reconciling with her father, Henry considered betrothing his daughter to the then Scottish Regent. Who was he?

7. In his will Henry specified how much was to be in both Elizabeth's and Mary's dowry, on the occasion of their respective marriages. What was the amount for both daughters?

Obviously, Elizabeth's dowry was never used, but Mary's went to Phillip II of Spain.
8. Who wanted to form an intimate relationship with the royal family, by marrying either Mary or Elizabeth?

His attempt to marry one of the sisters failed, so he settled it by marrying the Queen Dowager Catherine Parr.
9. Like her mother, and her step-mothers, Elizabeth had a motto in life 'semper eadem'. What was the translation?

Jane Seymour's motto was "To Obey and Serve", whereas Elizabeth's mother, Anne Boleyn's was "The Most Happy".
10. After her sister Mary's accession to the throne in 1553, Mary feared being overthrown by Protestants, who were apparently conspiring to put her sister Elizabeth on the throne. Who did she believe was conspiring with Elizabeth?

Thomas Wyatt was the son of the poet, also called Thomas Wyatt, who had formed a relationship with Queen Anne Boleyn just before she was arrested. What kind of relationship they had was not established.
11. Elizabeth became Queen on the 17th November 1558. When was she crowned?

She was crowned at Westminster on the 15th January 1559. An astrologer called John Dee helped her select this date.
12. On what date did Elizabeth open her first Parliament?

This was originally supposed to have happened on the 23rd January 1559, but Elizabeth put it off, describing herself as not feeling 'herself in good disposition of body'.
13. In 1562, she came close to death. Which disease had she caught?

14. After she recovered from this, she declared she would appoint someone to be Protector of the Realm in case of an emergency. Whom did she choose?

Robert was a favourite of Elizabeth's, and some believe that if he had been single, Elizabeth would have married him. He was the fifth son of Northumberland, and was appointed Master of the Horse.
15. Besides the future Earl of Leicester, what other Englishman caught her eye at a masque, and in 1572 became Captain of the Gentlemen Pensioners, her personal bodyguards?

Elizabeth had pet names for both Hatton and Dudley. Robert Dudley was 'Eyes' and Hatton was 'Lids'. Both were very annoyed when Walter Raleigh came on the scene.
16. Many musicians and poets in Elizabeths court praised her with what name?

It was the poet Edmund Spenser who dedicated his poem Faerie Queene to Elizabeth. The name Oriana originated from the Fairies. Oriana is said to a queen of the Fairies.
17. In 1569, the Earls of Northumberland and Westmorland aimed to restore Catholicism and put Mary Queen of Scots on the throne. What was the name given to this uprising?


Answer: Rising in the North

Elizabeth did not know what to do with her troublesome cousin Mary, she did not want to kill her, as she would be killing another Queen, but in the end she had no other choice.
18. To try and resolve her problem with Mary Queen of Scots, whom did she want to marry Mary to?

Dudley was the man Elizabeth wanted Mary to marry, that way keeping her by her. But she chose to marry Lord Darnley, who later fathered James VI of Scotland, later James I of England.
19. After finding out the Earl of Leicester had secretly married, whilst still protesting his undying lover for Elizabeth, she was almost induced to marry the Duke of Alencon. What finally turned her against it?


Answer: He was Catholic

Dudley had married Lettice Knollys. The Catholic 'problem' stopped her from marrying a few times - including the Habsburg Archdukes.
20. Elizabeth's cousin Mary, Queen of Scots, was found to be involved in which plot, that finally forced Elizabeth to sign her death warrant?

Mary had thrown herself at the mercy of Elizabeth a number of times, but had in the past tried to claim the throne of England. Elizabeth could not take any more chances, especially if there were a Catholic uprising.
21. Where was Mary Queen of Scots executed?

After she was beheaded, the executioner picked up her head by the hair. He then found that she was wearing a wig, and the head fell and rolled away, revealing silver hair.
22. "I know I have the body of a weak and feeble woman, but I have the heart and stomach of a King ..." is perhaps her most frequently quoted saying. Where did she give this speech?

She gave this speech to her men at Tilbury in 1588, before they set off to fight aginst the Spanish Armada.
23. Her Secretary of State, Sir Francis Walsingham, wished her to take a more positive role in opposing the Counter Reformation in Europe, by supporting whom against Phillip of Spain?

The Counter Reformation was the Catholic response to the Protestant reforamtion. The Jesuits, founded by Ignatius of Loyola, led a campaign to support the Catholic doctrine.
24. On what date in 1603 did Elizabeth I die?

Just before she died, it is said that she whispered the name Robert. This was obviously Robert Dudley, Earl of Leicester, who had died some years before.
25. With whom is Elizabeth buried in Westminster Abbey?

This quiz was reviewed by FunTrivia editor bloomsby before going online.
Any errors found in FunTrivia content are routinely corrected through our feedback system.
Most Recent Scores
Feb 03 2023 : Guest 73: 1/25
Jan 02 2023 : Guest 146: 11/25 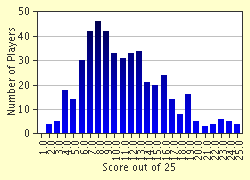 
Other Destinations
Explore Other Quizzes by DarcyUK