The reign of Queen Elizabeth I, from 1558 to 1603, is known as England's Golden Age because of all the political, scientific and artistic advances made during this era. Here are some questions about the Elizabethan Age.

Quiz Answer Key and Fun Facts
1. Who was Elizabeth's father?

She was Henry's daughter by Anne Boleyn.
2. Who was Elizabeth's mother?

Lady Margaret Beaufort was the mother of Henry VII, making her Elizabeth's great-grandmother. She had a key role in orchestrating Henry VII's return to England in 1485, which began the Tudor Dynasty.
3. How old was Elizabeth when her mother died?

Henry had Elizabeth's mother, Anne Boleyn, beheaded on May 19, 1536, ending 'the thousand days' of Anne Boleyn. At the time Elizabeth was not yet three years old.
4. Who immediately preceded Elizabeth I as ruler of England?

Mary I was Elizabeth's half-sister. She ruled for five years, and had Elizabeth imprisoned in the Tower of London for a time out of fear that Elizabeth was part of Sir Thomas Wyatt's plot against the throne.
5. Which of the following did NOT occur during Elizabeth's reign?


Answer: Invention of the printing press.

The printing press was invented 100 years before Elizabeth's time.
6. Which of the following did NOT occur during Elizabeth's reign?


Answer: Sir Walter Raleigh wrote the 'History of the World'.

Raleigh wrote his 'History of the World' while imprisoned by James I. The first theatre (since Roman times) opened in 1574, simply called 'The Theatre', followed by the Rose Theatre in 1592 and the Globe Theatre in 1599.
7. Which of the following did NOT occur during the reign of Elizabeth?


Answer: the signing of Magna Carta

The Magna Carta was of course signed by King John way back in 1215.
8. Who of the following was NOT executed during Elizabeth's reign?

Elizabeth had Raleigh imprisoned in the Tower of London for a time, but he was then restored to her good graces. It was during the reign of James I that Raleigh was framed as a member of a plot against the throne, and he was executed in 1618. At his execution he asked to see the axe and said, 'This is a sharp medecine, but it is a physician for all diseases.'
9. Elizabeth remained single all of her life but had a number of suitors. Which of the following was NOT one of her suitors?

Elizabeth was not yet two years old when More was executed by Henry VIII on June 6, 1535.
10. Who succeeded Elizabeth as ruler of England?

James VI of Scotland became James I of England, beginning the Stuart Dynasty. He was a descendant of Henry VIII's sister Margaret.
Source: Author chessart 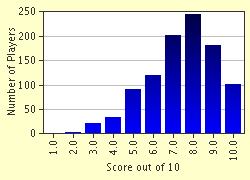 Related Quizzes
This quiz is part of series British History:

Here are five quizzes on various aspects of British history.