In recognition of the 50th anniversary of the last executions in Britain, here is a quiz on executed criminals there.

Quiz Answer Key and Fun Facts
1. Who was the last woman executed in Britain?

This occurred on July 13 1955. Because Ruth was mother of young children and had been physically assaulted by her victim David Blakeley - and perhaps because she was also stunningly beautiful - public opinion was sympathetic towards her. Moreover, when she was first questioned by the police she did not have a lawyer present.

It is often said that her execution contributed to the campaign for the abolition of capital punishment in the United Kingdom.
2. John Christie was executed in 1953 for the murder of his wife. Where did this take place?

Christie was a serial killer but was only tried for one murder. 25 Cromwell Street was where murderers Fred and Rose West committed their foul deeds. 10 Downing Street is the residence of the British Prime Minister, and 20 Forthlin Road was Paul McCartney's childhood home.
3. Mrs Styllou Christofi was executed in December 1954. Who was her victim?

Prior to this, Mrs Christofi had been acquitted in her native Greece of the murder of her own mother in law which had been by the same method of shoving a burning rag down her throat. By a curious coincidence, she lived in the same street as Ruth Ellis committed murder a few months later.
4. Who was executed for the A6 Murder in April 1962?

There has been controversy surrounding this case for years, even though DNA testing proved him as the possible killer. Thirteen potential witnesses came forward in his defence, although most were never called. An 'A6 Committee' was formed to get the case reopened of which John Lennon and Yoko Ono were members.
5. Ronald Marwood was executed for the murder of a policeman during a brawl between the police and local Teddy Boys. In which year?

Some of the Teddy boy gang served prison sentences for their part in this, amongst them was future 'Eastenders' actor Peter Dean. The brawl took place in North London in December 1958. The execution date was 8 May 1959.
6. The last execution in Britain was a joint effort with two people executed on the same day at the same time. Who were this unfortunate couple?

Pascoe and Whitty were executed in 1963 and Thompson and Bywaters in 1923. Of Bentley and Craig, Bentley was executed whilst Craig, due to being a 'minor' at the time was jailed. The above execution was carried out during the run up to the closely fought 1964 general election.
7. Who was the last man executed in Scotland?

This happened in August 1963. Peter Manuel had already been executed in Scotland in 1958, Timothy Evans was executed in England in 1950 and David Chapman was the last to be sentenced to death in Britain but his sentence was commuted when the death penalty was suspended 'for an experimental period' in 1965. The death penalty was finally abolished on 18 December 1969.
8. What was distinctive about the 1868 execution of Michael Barrett?


Answer: It was the last public execution in Britain

He was executed on 25 May at Newgate Prison for Fenian terrorist activities and was behind the Clerkenwell bombing of 1867 in which 12 people were killed. Newgate Prison was also noted for its terrible conditions and was the catalyst for penal reformers such as John Howard and Elizabeth Fry.
9. Who was the 'Acid Bath Murderer' executed in 1949?

He married multiple times and drowned each wife in a bath of acid. Neville Heath killed his girlfriend, Sidney Fox killed his mother and Karl Hulten was an American serviceman who was charged for murder alongside his girlfriend Elizabeth Jones who was reprieved.
10. Who was the last woman to be publicly executed in Britain?

After 1868 all executions in the United Kingdom were conducted in prisons and not in public. Mrs Kidder killed her stepdaughter. Mrs Waddingham was a nurse who killed her patients, Mrs Newell murdered a newspaper delivery boy and Mrs Merrifield murdered an elderly lady whom she looked after, Sarah Ricketts, who had made out her will in favour of Mr and Mrs Merrifield. Louisa's husband Alfred was tried alongside her but acquitted.
Source: Author MadameGuvnor 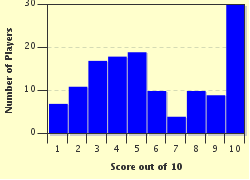 Related Quizzes
1. Murder Trials of the Century Average
2. Escapes From Alcatraz Very Difficult
3. Screw the Rules, I Have Money Easier
4. You Have The Right to Remain Tough
5. Scary Marys Average
6. America and the Death Penalty: 19th Century Tough
7. Before They Were Infamous Average
8. British Poisoners Tough


Other Destinations
Explore Other Quizzes by MadameGuvnor