Some quintessential Brits for you to recognize - with some little hints to point you in the right direction!

Quiz Answer Key and Fun Facts
1. A British naval hero, he's also given his name to a cricketing superstition.

English cricketers have an unlucky number - 111 - which is called "The Nelson", referring to the legend of Nelson's one missing eye, arm and leg (even though Nelson never lost a leg!)

Born in 1758, Horatio Nelson died on the deck of his ship in the Battle of Trafalgar in 1805. His men put his body in a barrel of brandy to preserve it until they got back to port - then drank the brandy. Why waste good booze, eh?
2. A Scottish born writer, who wrote about a sleuth more connected with those who make bread than those who make haggis. He is often mistakenly associated with the words 'It's elementary, my dear ...'

Sir Arthur Conan Doyle is best known for writing about Sherlock Holmes - who was based in Baker Street, and assisted by Dr. Watson. Sir Arthur graduated as a Doctor of Medicine from Edinburgh University, before serving in the Boer War.

A keen cricketer, he played ten first class matches for the MCC - whose home ground of Lords is literally only a 5 minute walk from 221b Baker Street in London!
3. Legend has it that one of the world's greatest theories, developed by this individual, all came after being hit on the head by a piece of fruit.

Born in Woolsthorpe, Lincolnshire in 1643, Sir Isaac Newton was a very bright man - and not just because he published a theory about the nature of light! He was also an accomplished Mathematician, inventing or discovering differential calculus, he discovered three laws of motion and is most famously associated with formulating the theory of universal gravitation. Whether the apple falling from the tree story is true in that context or not, we'll never know - but it's still a good story, and an excellent illustration of gravity!
4. The first footballer to score a hat trick in a World Cup Final, this gentleman could have become a county cricketer with Essex if he hadn't chosen to kick a larger ball around instead.

Bobby Moore was a West Ham team mate of Geoff Hurst's, as well as being his World Cup winning captain with England in 1966. Bobby Charlton also played in that game, but spent most of his career in the north of England with Manchester United. Ian Botham was best known as a great England cricket player - though he did actually play some top level football with Scunthorpe United.
5. After the Beatles split up, one of them grew wings, as it were, and soared to the heights of the pop charts once more.

One of the Fab Four from Liverpool, Sir Paul has continued to entertain music fans firstly with his band Wings, and in more recent years, as a solo artist.

Wings' biggest UK hit was "Mull of Kintyre", which sold more copies than any individual Beatles' song - although it was a commercial flop in the USA.
6. Who is regarded as the "father" of the National Health Service in the UK?

Born in Tredegar in Monmouthshire, Wales, Aneurin Bevan was a Labour politician who, as Minister of Health from 1945 to 1951, is regarded by many as being the chief architect of the National Health Service (NHS).

Nye Bevan, as he was popularly known, was one of 10 children, and showed very little aptitude for his studies, leaving school at the age of 13 to become a miner. He started taking an interest in politics at this stage, and by the age of 19 he was the Trade Union leader in his colliery.

(Aneurin Bevan should *not* be confused with his Labour colleague, Ernest Bevin).
7. A novelist who lived from 1775 to 1817, not much is known about her personal life and most of what we do know comes from letter written to her sister Cassandra. Her father was a rector in Hampshire, who went about his duties, no doubt, with pride but no prejudice.

Like many artists though, her work was barely appreciated during her lifetime. Indeed, it wasn't until the 1940s, well over a century after her death, that her works first started being included on academic syllabii.
8. This contemporary British novelist had a wizard wheeze - not in a steam engine, on a broomstick or in a flying car, but on a trip between Manchester Piccadilly and Euston.

Next time you're stuck in a train inexplicably, don't get all het up - turn your mind to positive, creative thoughts. This is how JK Rowling says she first got the idea for the Harry Potter novels - stuck on a train from Manchester to London.
9. The Knight, the Miller, the wife of Bath, the Franklin, the Pardoner and the Nun (twice!) all get to tell their tales as part of this author's 14th Century epic.

Not strictly a "Brit", Johnny Lydon came to London from Ireland as a youngster, but as Johnny Rotten, is regarded as one of the leading figures of the 1980's "Punk Music" phenomenon. Often controversial, sometimes misunderstood, he's quintessentially quirky - so very British after all!
Source: Author huw27 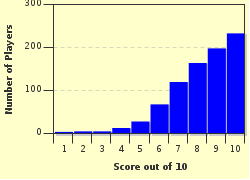 
Other Destinations
Explore Other Quizzes by huw27