This is the seventh of a series of quizzes based on the results of a public vote undertaken by the BBC in 2002. Working in reverse order, this quiz will cover numbers 40-31.

Quiz Answer Key and Fun Facts
1. Which English monarch took part in the meeting with Francis I of France, known as "The Field of the Cloth of Gold"?

"The Field of the Cloth of Gold" took place in June 1520 on the outskirts of Calais. It was a diplomatic meeting intending to show friendship between England and France. The two castles in the area were felt to be too rundown to house the courts, so each court had its own campsite, making it possibly the most expensive camping holiday in history. Tents and pavilions were covered with cloth of gold and jewels. Little was achieved politically.
2. What did John Harrison (1693-1760) invent?

Prior to the invention of the marine chronometer, it was difficult for mariners to accurately determine their east/west position. A timepiece was needed that would keep time accurately and not be affected by the rolling of a ship, or extremes of temperature.

A timepiece that lost or gained only a few seconds a day could result in a ship sailing miles off course. John Harrison spent around forty years creating and improving his device - a lifetime's work.
3. Who wrote the books "Songs of Innocence" and "Songs of Experience"?

The two books of poetry were completed in 1789 and 1794 respectively, and since completion of "Songs of Experience" have usually been published together under the titles "Songs of Innocence and Experience: Shewing The Two Contrary States of the Human soul". William Blake (1757-1827) is not only famous for his written work, but also for his paintings and illustrations.
4. This "Man For All Seasons" was Lord Chancellor of England from 1529-1532 and was beheaded on the orders of King Henry VIII in July 1535.

He refused to swear an oath supporting the Act of Succession. This Act named Anne Boleyn's daughter Elizabeth as heir to the throne, and removed Princess Mary, Katherine of Aragon's daughter, from the succession, declaring her illegitimate. Because of his refusal to swear the oath, More was found guilty of treason and executed at the Tower of London.

He was canonised in 1935.
5. Sir Steve Redgrave won a gold medal at five consecutive Olympic games. For which sport were these awarded?

They left a trail of carnage and destruction, destroying the town of Colchester, London and St Albans. They took no prisoners, killing civilians and soldiers alike.

The Iceni were eventually defeated by the Romans in battle. Boudica's fate is unclear, but legend says that she poisoned herself.
7. Who emigrated to America in 1774, where he produced the pamphlet "Common Sense", supporting American independence from Britain?

Thomas Paine (1737-1809) believed that Republicanism was the only feasible form of government. He was also a strong supporter of the French Revolution, though he did not believe King Louis XVI should have been executed. He died in relative obscurity in New York. Ten years after his death William Cobbet, an admirer of Paine's, removed his body and bought it back to England, presumably with the intent of giving it a fitting burial. Alas, this seems to have slipped his mind as when he died, Paine's remains were still in his possession, and their whereabouts remain unknown.
8. Who became the first English football player to score a goal in three different World Cup tournaments when he scored against Ecuador in 2006?

David Beckham (b. 1975) and his wife Victoria are much loved paparazzi targets. David also made it to number 91 on a list of 100 Worst Britons!
9. Five comedians were honoured by having their caricatures printed on postage stamps in 1998. They were Tommy Cooper, Les Dawson, Joyce Grenfell, Peter Cook and who else?

Eric Morecambe (1926-1984) was born John Eric Bartholomew. He took the name Morecambe from his home town. He and partner Ernie Wise were a mainstay of British TV for around thirty years. The Morecambe and Wise Christmas Show was a TV highlight for many years.

In May 1984 he appeared in a stage show in Gloucestershire. He took six curtain calls, and on the last one said "that's your lot". He then walked off stage and collapsed. He died in hospital later that night.
10. Group Captain Leonard Cheshire's name lives on in The Leonard Cheshire Foundation, which cares for disabled and terminally ill people. However, during World War II he was present at which historic event?

After the war he bought a property called Le Court with the intention of providing a base for ex-servicemen and their families to live together to help them adjust to life outside the forces. This venture failed, but Cheshire later found out that one of the servicemen he had tried to help was homeless and terminally ill. He bought the man back to Le Court and nursed him. Things snowballed from there and by 1948 he had 24 people staying at the house.

Today his charity is called Leonard Cheshire Disability and provides support to disabled people worldwide. Cheshire married Sue Ryder, who had herself founded a charity providing support for those with serious illnesses.
Source: Author Supersal1 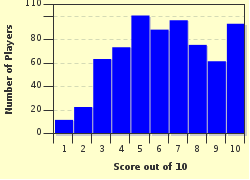