This is the second in my series of quizzes inspired by the BBC public vote to find the 100 greatest Britons of all time. This quiz covers 90-81, in reverse order.

Quiz Answer Key and Fun Facts
1. This mediaeval monarch is known for his marriage to a woman who had been Queen of France, fighting his sons and ridding himself of a turbulent priest. Who is he?

Henry II (1133-1189) was born in France. His claim to the throne came from his Grandfather, Henry I, via his mother, The Empress Matilda. The family in-fighting was largely caused by disagreements over who should inherit Henry's vast French properties, some of which were bought to him by his wife, Eleanor of Aquitaine. The disagreement with his one time friend Thomas a Becket was caused largely by the fact that Henry wanted to increase his control over the church and cut down on interference from Rome.

Henry increased the use of Scutage, a tax paid by nobles to avoid military service. This enabled him to pay mercenaries to act as soldiers, thus strengthening his control of the armed forces. He also established the first Magistrate Courts and introduced various assizes, which were a forerunner of the trial by jury system.
2. Donald Campbell was killed in January 1967, while trying to break the world water speed record. On which body of water did he die?

He died in his boat Bluebird K7 whilst travelling in excess of 300 mph. Famous footage of the event shows the boat rising from the water and then somersaulting. The wreckage was not recovered until March 2001, and Campbell's body was recovered in May 2001.
3. The name of Bernard Montgomery is most associated with which famous battle?

El Alamein (1942) was the first major allied land victory in WWII. Bernard Montgomery (1887-1976) was popular with his troops, but considered rather "difficult" by his superior officers. He also served with distinction in WWI. He was given the title of Viscount Montgomery of Alamein in 1946 and was Deputy Supreme Commander of NATO forces from 1951-1958.
4. John Lydon (b. 1956) is a somewhat surprising addition to the list. Perhaps the most famous punk rocker of all, by what name was he known when he was in the Sex Pistols?

In 2008, John appeared in adverts for Anchor butter - from anarchy to advertising. He appeared on "I'm a Celebrity, Get Me Out of Here". Whilst on that show he commented on fellow contestant Jordan ""The woman's talentless... Doesn't do anything and, when it does, it nags all the way through.

It don't contribute. It's a parasite." Hmm, pots and kettles? Jordan achieved fame through having outrageous breast enlargements, John Lydon achieved fame by public swearing, spitting and vomiting.
5. The fact that this person's name appears on the list at all shows certain elasticity with the rules, as he is Irish rather than British. Born in Dublin in 1960, who is this musician and humanitarian, the vocalist for the group U2?

Bono (real name Paul Hewson) was the first person to be nominated for a Grammy, a Golden Globe, an Academy Award and a Nobel Peace Prize. U2 were founded in 1976 and originally went by the name Feedback. They were inducted into the Rock and Roll Hall of Fame in 2005.
6. The founder of the Virgin Empire - what is his name?

Born in 1950, Sir Richard set up a mail order record business in 1970. Two year later he opened his first shops, Virgin Records. He sold the record side of his empire to EMI in 1992. His empire grew to cover an airline, package holidays, financial services and healthcare.

While James Watt did not actually invent the steam engine, he was responsible for developing the idea into a working model. The first working engines were used commercially in 1776, mainly for pumping water from mines.
8. "Harry Potter" author J. K. Rowling features on this list of Greatest Britons. Where was she born?

Joanne Rowling was born in Gloucestershire in 1965. Although the 'K' in her name stands for Kathleen, it is not part of her name. Her publishers wanted her to use initials rather than her name, so as not to deter young boys from reading her books. Lacking a middle initial in her own name, she borrowed the 'K for Kathleen' from her Grandmother.

The "Harry Potter" books have sold over 400,000,000 copies. Getting children to read for pleasure in these days of multi media entertainment is a huge achievement.
9. King Richard III was the last English king to die in battle. To which royal house did he belong, York or Lancaster?

King Richard III (b. 1452) died at the Battle of Bosworth in 1485. The crown then passed to the first Tudor Monarch, Henry VII. Thanks largely to Tudor propaganda, Richard III is usually thought of as hunchbacked and deformed, and is thought to be responsible for the deaths of his nephews, "The Princes In The Tower". However, no proof has been found for this accusation, or of any physical deformities. The bodies of two young boys were discovered near the White Tower in The Tower of London in 1674, and it is generally supposed that they were the bodies of the said princes.

There are many groups that seek to redress the balance against Richard III, and it is thought that they are largely responsible for his inclusion in the list. He only reigned for a little over two years and the Battle of Bosworth did put an end to the Wars of the Roses, which had weakened England for over thirty years.
10. Which fourteenth century author is often known as "The Father of English Literature"?

Geoffrey Chaucer is best known as the author of "The Canterbury Tales". He is believed to have been born around 1343 and died in October 1400, although this is uncertain, as the date of his death comes from an engraving on his tomb in Westminster Abbey.

However, this was not done until 1556, when his body was placed in a grander tomb, so the date of his death remains uncertain. The last written record of him is in June 1400. He is the first person to be buried in what is now known as Poets' Corner.
Source: Author Supersal1 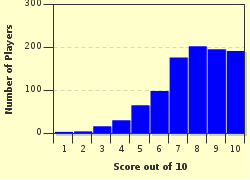