These women were pioneers in very different fields.

Quiz Answer Key and Fun Facts
1. Margaret Thatcher became the first female British Prime Minister in May 1979, but who, 60 years earlier, had become the first woman to sit in Parliament?

American-born Nancy (Lady) Astor was elected MP for Plymouth, Sutton in November 1919, taking over the seat from her husband, who became a member of the House of Lords on the death of his father. Constance (Countess) Markievicz had been elected as member for St Patrick's, Dublin in the 1918 General Election but, like other Sinn Fein MPs, did not take up the seat. Margaret Wintringham was the first British-born woman to sit in Parliament.

She succeeded her late husband as Liberal MP for Louth, winning a by-election in September 1921. Margaret Bondfield became in 1923 one of the first three Labour women MPs.

Elizabeth Lane was assigned to the Probate, Divorce and Admiralty Division of the High Court. She had previously been the first woman to be appointed a County Court judge and only the third woman King's Counsel.

Barbara Mills became the first female Director of Public Prosecutions in 1992, Pauline Clare was the first ever woman Chief Constable, being appointed chief of the Lancashire Constabulary in 1995, and Harriet Harman became in 2001 the first woman to hold the position of Solicitor General for England and Wales.
3. The first British woman to win a Nobel Prize did so in 1964. Which prize did Dorothy Hodgkin win in that year?

Dorothy Crowfoot Hodgkin was the third woman to win the Nobel prize in Chemistry. She was a pioneer in protein crystallography, solving the structures of cholesterol, penicillin and of vitamin B12, for which the Nobel Prize was awarded. She solved the structure of insulin in 1969, having worked on the problem for over 30 years.

She was a Fellow of Somerville College, Oxford, where Margaret Thatcher was one of her students.
4. In 1991 Helen Sharman became the first British woman to do what?

Helen Sharman was the first British astronaut of either sex. She was part of the Soyuz TM-12 mission, launched in May 1991, and spent most of her eight days in space aboard the Mir space station. A chemist, she had, appropriately, worked for the Mars chocolate company.

Amy Johnson became the first woman of any nationality to fly solo from England to Australia in 1930, Rebecca Stephens became the first British woman to climb Everest in 1993 and in 2013 Maria Leijerstam reached the South Pole using a three-wheel recumbent cycle.
5. Corbiere, in 1983, was the first Grand National winner to be trained by a woman. Who was she?

The Jockey Club, at that time British horseracing's ruling body, was compelled to issue the first training licences to women in 1966 following a long campaign by Florence Nagle. Mrs Nagle, in her seventies by this time, had been training horses for over 30 years but, as with other women trainers, the training licence had had to be held in the name of her head lad.
6. The title of BBC Sports Personality of the Year was first awarded in 1954. The first female recipient of the title won it in 1962, two years after winning gold at the Rome Olympics. Who was she?

Anita Lonsbrough achieved another first in Tokyo in 1964, when she became the first woman to carry the Olympic flag. She was voted Sports Personality of the Year after winning three gold medals in the 1962 Commonwealth Games and gold, silver and bronze at that year's European championships.

She broke seven world records in her career. British women's swimming was big in the early 1960s and third place in the public vote that year went to Linda Ludgrove (my childhood heroine) who was then aged 15 and who herself broke seven world records. Completing a female clean sweep, second place went to sprinter Dorothy Hyman, who went on to become the Sports Personality of 1963. Long-jumper Mary Rand made it three in a row, winning the title in 1964 after winning gold, silver and bronze medals in Tokyo.
7. Nancy Wilkinson was the first winner of which long-running TV competition?

Inspired by the producer Bill Wright's experience of being interrogated by the Gestapo, "Mastermind", with its infamous black chair, was first broadcast in 1972. A college lecturer, Nancy Wilkinson answered questions on French Literature, European Antiques and the History of Music, 1550-1900.

The second and third series of "Mastermind" were also won by women, Patricia Owen and Elizabeth Horrocks respectively.
8. Who in 1967 became the first British winner of the Eurovision Song Contest?

Known for singing in bare feet, Sandie Shaw won the contest in Vienna with "Puppet on a String". This was her third UK number one hit and went on to top the charts throughout Europe. Lulu, singing "Boom Bang-A-Bang", was involved in a four-way tie for first place in Madrid in 1969. Kathy Kirby finished in second place in Naples in 1965 singing "I Belong" and Mary Hopkin was second in Amsterdam in 1970 with "Knock, Knock Who's There?".
9. It was announced in 2014 that Judith Weir was to become the first female holder of which office?


Answer: Master of the Queen's Music

The title of Master of the King's (or Queen's) Musick was created by Charles I in 1626 and is the musical equivalent of Poet Laureate. Judith Weir is best known for her operas, including "A Night at the Chinese Opera" and "The Vanishing Bridegroom".

Angelica Kaufmann and Mary Moser were among the original members of the Royal Academy of Arts when it was founded in 1768. The next woman to become a full member was Dame Laura Knight, elected in 1936.

The Royal Society was founded in 1660, but the first female Fellows, Kathleen Lonsdale and Marjory Stephenson, were not elected until 1945.

Carol Ann Duffy became the first woman Poet Laureate in 2009.
10. Membership of the Order of Merit, established in 1902, is limited to 24 people at any one time and is in the gift of the British monarch. Who was the first woman to be appointed to the Order? 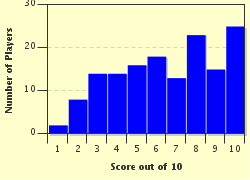 
Other Destinations
Explore Other Quizzes by dellastreet