A Knight to Remember Trivia Quiz

British honours can be confusing for some. This quiz will look for you to identify people from the clues given who have been honoured with a knighthood by the Queen. These people will be from sport, music, film and theatre.

Quiz Answer Key and Fun Facts
1. This dyslexic entrepreneur and "Virgin" business magnate and investor was knighted in 1999. Who is he?

Sir Richard Charles Nicholas Branson started his first business venture aged just 16. From the humble beginnings of this small business he could not be held back and went on to become one of the richest people in the UK with the Virgin group brand. He now even owns an island called Necker Island in the British Virgin Islands. Up to 28 guests can be accommodated there at any one time.
2. This English heavyweight boxer is known for his left hook, called "Enry's 'Ammer", and affectionately known in the UK as "Our 'Enery". He was knighted in 2000. Who is this twice-winner of the BBC Sports Personality of the Year Award?

Born in South East London in 1934, Sir Henry Cooper became idolised by the British public. He and his identical twin brother, George Cooper, both eventually became boxers. George had a reasonable career, but nothing on the scale of Henry's. Henry fought Muhammad Ali twice.

Although Ali won both fights the first fight was a non-title fight and "Our 'Enery" became famous for knocking the young Cassius Clay down with "Enry's 'Ammer". To this day people still say the future Muhammad Ali was saved by the bell in this fight.

Henry died on the 1st of May 2011 aged 76.
3. This next knight was the first "rock star" to be awarded a knighthood. This "Bachelor Boy" was often referred to as the "British Elvis". Who is he?

Sir Cliff Richard, born Harry Rodger Webb, received his knighthood in 1995. From the 1950s to 1990s he had a number 1 hit in the UK in each decade. John Lennon once said, "Before Cliff and the Shadows, there had been nothing worth listening to in British music". Cliff spends a lot of time at his Portuguese estate, where he even has his own vineyard and brand of wine.

Some people may believe Bob Geldof was the first musician to be awarded a knighthood. This is not the case, though, as his award nine years earlier was an honorary one, as he is not a British citizen.
4. This cyclist was the first Briton to win the Tour de France. In the same year he also won the BBC Sports Personality of the Year Award. Who is this knight?

Sir Bradley Marc Wiggins had a year you could only dream of in 2012. After winning the Tour de France he went on to win an Olympic gold medal in his home country Olympics. This was not the first gold medal Bradley had won. He had previously won three other gold medals--individual gold in 2004 and 2008 and as member of a team in 2008. He was knighted in the 2013 New Year Honours list.
5. This next knight was born in Treforest South Wales in 1940 and was knighted in 2006 for services to music. Well known for his tight pants and hip gyrations. It was not unknown for his females fans to shower him with their undergarments. Who is the Welsh "Sex Bomb"?

Sir Thomas John Woodward, or Tom Jones as he likes to be known, is our knight. His first release "Chills and Fever" (1964) did not chart. However the second record he released, "It's Not Unusual", became an international hit. As early as 1967 Tom Jones was performing in Las Vegas and over the years has performed duets with some of the greats.

He has even been passing on his knowledge and experience as a mentor on the UK version of "The Voice".
6. Born in 1962, this oarsman knight who suffers from diabetes mellitus type 2 has shown over the years that this is not a reason not to participate at the international level. Who is this knight, winner of five Olympic gold medals and one bronze medal over the years?

Sir Steven Geoffrey Redgrave won gold medals at five consecutive Olympic Games from 1984 to 2000, the first British athlete to achieve that goal. Over the years he also won nine World Championship medals. He received the BBC Sports Personality of the Year Lifetime Achievement Award in 2011.
7. This actor, comedian and singer-songwriter born in 1915 and knighted in 2000 found fame implying he was a fool. In later life he found fame again, this time in Albania. Charlie Chaplin once said he was his "favourite clown". Who was this giant of British comedy?

Sir Norman Joseph Wisdom was not only a comedian; he starred in several films as well as on Broadway. Norman Pitkin was the role he played most often. Norman loved "slapstick" comedy and really mastered this over the years. In later years he played on Broadway and actually received a Tony award nomination for his part in the Broadway production of "Walking Happy".

He became a cult figure in Albania after becoming one of the few Western actors the country's dictatorship agreed was acceptable viewing.

He was even made honorary citizen of Tirana.
8. Born Maurice Joseph Micklewhite, this knight of the realm who has appeared in over 100 films. One of his most famous lines was from a 1969 film and he is remembered for this line even today. Who is this actor who said, "You're only supposed to blow the bloody doors off!"?

Sir Michael Caine, born Maurice Joseph Micklewhite, said the line "You're only supposed to blow the bloody doors off!" in the 1969 film "The Italian Job". From "Zulu" in 1964 to Pixar's 2011 film "Cars 2", Michael Caine has always been recognised by his Cockney accent. Knighted in 2000, Michael Caine is one of the few actors who was nominated for an Academy Award for acting in every decade from the 1960s to 2000. Most people who do an impression of Michael Caine use the phrase, "Not a lot of people know that."
9. Knighted in 1985, this knight has become the face and voice of natural history programmes on TV in the UK. His elder brother was a director, producer and actor in cinema films. What name does this person have?

Sir David Frederick Attenborough has been on UK TV for more than 60 years. He has also been a member of senior management for the BBC. Sir David was voted one of the 100 Greatest Britons in a 2002 poll. Programmes like "Planet Earth", "Life on Earth", and "The Living Planet", to name just a few, have made him a household name worldwide.

His elder brother, Richard Samuel Attenborough, received various awards, which included a knighthood. He was then further honoured by being made a lord and was "The Right Honourable The Lord Attenborough".

He died in 2014.
10. This Welsh actor, who was influenced by Richard Burton and knighted in 1993, is sometimes remembered for the line "I ate his liver with some fava beans and a nice chianti". Who is this knight?

Sir Philip Anthony Hopkins has not only been an actor on film, stage and TV, but he is also a composer. Working with Stephen Barton he helped compose "The Masque of Time". In 2008 this piece was premiered by the Dallas Symphony Orchestra. In 2012 he released a album of classical music.

In 1991 Anthony Hopkins won the Best Actor Oscar for playing the cannibalistic serial killer "Hannibal Lecter" in "The Silence of the Lambs". This in many people's opinion was his most well-known role.
Source: Author pmarney 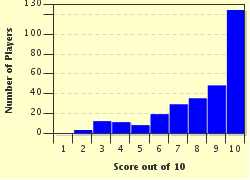 Related Quizzes
This quiz is part of series UK This and That:

The only connection between all these quizzes is the UK


1. Eyafjallajökull... That's Easy For You To Say! Average
2. It's Time to Come Home... Easier
3. It's On the Tip of My Tongue Easier
4. Do You Know Me by My Catchphrase? Average
5. Where Would I Be Without You? Easier
6. No Men Allowed! Easier
7. A Bit of This and That in the UK Average
8. "Come Together" - Bridging the North/South Divide Easier
9. A Knight to Remember Easier
10. Magical Mystery Tour around The United Kingdom Average
11. It Was Called What? Average
12. It's a Puppet! Average


Other Destinations
Explore Other Quizzes by pmarney