This is the eighth of a series of quizzes based on the results of a public vote undertaken by the BBC in 2002. Working in reverse order, this quiz will cover numbers 30-21.

Quiz Answer Key and Fun Facts
1. Every 5th November Britain celebrates this man's failure to blow up Parliament in 1605. Who is he?

The leader of the Gunpowder Plot was Robert Catesby. Guy Fawkes (1570-1606) was recruited for his experience with explosives. The conspirators intended to blow up the Houses of Parliament, along with King James I and most of the aristocracy. The conspirators were Catholic and sought a rather drastic end to Protestant persecution of Catholics, and to reinstate Britain as a Catholic country.

However, the plot was discovered and Guy Fawkes was sentenced to be hung, drawn and quartered. He managed to jump off the scaffold, thus breaking his neck and avoiding the most painful part of the process.
2. Which musician was also known for a time as "The Thin White Duke"?

David Bowie was born David Robert Jones in 1947. His first single to be released was "Liza Jane" in 1964, but this and several more failed to reach the charts. His first chart success was in 1969 with "Space Oddity".

Bowie has been involved in the music business for over forty years, both as a musician and producer. He also has several film appearances to his credit. He came to public attention as an actor in "The Man Who Fell to Earth (1976)". He also made an uncredited appearance in "The Virgin Soldiers" (1969).
3. What did William Wilberforce (1759-1833) campaign against for many years?

William Wilberforce was born into a wealthy merchant family. As a young man he lived a fairly racy lifestyle. He became an MP in 1780 while still a student, after standing as an independent candidate. He became an Evangelical Christian in his mid twenties and started campaigning against the slave trade.

The Slave Trade Act, which outlawed trading in slaves, was passed in 1807. The Slavery Abolition Act was passed in 1833 and slavery was officially abolished within the British Empire in 1834, the year after Wilberforce's death.
4. Emmeline Pankhurst (1858-1928) is best remembered for being a vociferous campaigner for which cause?

Emmeline Pankhurst did not start the movement for women's suffrage, as many people had spoken out for this since women were first formally excluded from the vote under the Great Reform Act of 1832. She founded the Women's Social and Political Union in 1903.

At the outbreak of World War I, Emmeline Pankhurst called for women to be allowed to fill the jobs left by men who were fighting at the front. In 1918, women over the age of thirty were granted the vote. It was not until 1928 that all women over the age of twenty-one were given the vote, putting them on an equal footing with men.
5. William Tyndale was executed in 1536. What was his crime?

William Tyndale (born c. 1494) is credited with being the first person to translate the Bible from Hebrew and Greek texts into English. He believed that the best way of spreading the word was to make the Bible accessible to all and is quoted as saying ""I defy the Pope, and all his laws; and if God spares my life, I will cause the boy that drives the plough in England to know more of the Scriptures than the Pope himself!", which rather glosses over the fact the the ploughboy was unlikely to be able to read!

He was convicted of heresey whilst living in Belgium. His body was burnt at the stake, but in an act of "clemency", he was strangled beforehand.
6. What is the title of Professor Stephen Hawking's best known book?


Answer: A Brief History of Time

Stephen Hawking (b. 1942) is a theoretical physicist. He suffers from ALS and is now almost completely paralysed. He was diagnosed with motor neurone disease at the age of 21, with a probable life expectancy of two to three years.

"A Brief History of Time" was published in 1988 and attempts to explain such things as Black Holes and The Big Bang Theory to the lay person.
7. When Queen Elizabeth II was born in 1926, where did she stand in the line of succession to the throne?

Elizabeth's paternal grandfather, King George V, was on the throne at the time. Her uncle, Prince Edward, was heir to the throne. Her father was Prince Albert, Duke of York (later King George VI). Prince Edward was expected to marry and have children, so at the time of her birth she was not viewed as a serious candidate for the crown.

However, Edward VIII abdicated and the rest, as they say, is history. Elizabeth became Queen on the death of her father in 1952.
8. Who was the last native Welshman to hold the title "Prince of Wales"?

Owain Glyndwr (or Glendwr) was born in Wales in the 1350s. As a young man, he studied law in England and also served in the English army. In the late fourteenth century he had a land dispute with Baron Grey de Ruthyn. Glyndwr appealed to Parliament to give a judgement and they found in his favour. Grey had the decision overturned and Glyndwr appealed. The appeal was rejected without a hearing. Grey also failed to pass on a summons to Glyndwr to provide troops to support King Henry IV's Scottish campaign. On his failure to do so, the King declared Glyndwr a traitor. This led to what is known as the Welsh Revolt, which lasted from 1400-1415. Glyndwr was declared Prince of Wales in 1400.

The rebellion was over by 1415, but Glyndwyr was never captured and there is no known sighting of him after 1415.

Since mediaeval times, the title of Prince of Wales has usually been given to the eldest son of the reigning British monarch.
9. The unit of electrical capacitance is named after which of these people?

Michael Faraday (1791-1867) was born into a fairly poor family. He left school at the age of fourteen for an apprenticeship and educated himself in scientific subjects. By virtue of persistence, he obtained a job as assistant to Humphrey Davy, a chemist and inventor. Faraday studied electromagnetism and electrochemistry and also discovered alectromagnetic induction.

The 'Farad' is the unit of electrical capacitance, but was originally used to describe a unit of electrical charge.
10. Alan Turing (1912-1954) made significant contributions in the field of computer science and cryptology. However, his career effectively came to an end in 1952 after what event?


Answer: He was convicted of gross indecency after admitting to a homosexual relationship

Alan Mathison Turing worked on the Manchester Mark 1, one of the earliest computers. During World War II he worked at the codebreaking centre in Bletchley Park.

In 1952 Turing reported an acquaintance to the police for breaking into his house. During the subsequent investigation it was discovered that he had previously had a homosexual relationship with the man. Homosexuality being illegal at the time, he was convicted of gross indecency. He was given probation rather than a jail sentence, one of the conditions being that he receive hormone injections to lessen his sexual urges.

He lost his security clearance, as there were fears that being a homosexual could lead to security staff being open to blackmail by foreign agents. The rather obvious solution of decriminalising homosexuality didn't seem to cross anyone's mind. Male homosexuality remained illegal in England and Wales until 1967, in Scotland until 1980 and Northern Ireland until 1982.

Alan Turing died of cyanide poisoning in 1954. The verdict was suicide, although there were rumours that he was murdered because he was still considered a security risk.
Source: Author Supersal1 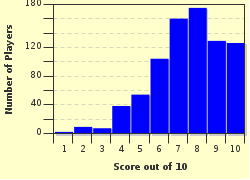