This is the fifth of a series of quizzes based on the results of a public vote undertaken by the BBC in 2002. Working in reverse order, this quiz will cover numbers 60-51.

Quiz Answer Key and Fun Facts
1. This composer is very well known for his "Pomp and Circumstance March No.1", which USA quizzers may also know as "The Graduation Song". Who is he?

Elgar (1857-1934) was born in Worcestershire. He was surrounded by music from an early age, as his father was a music dealer and a church organist. Elgar taught himself musical theory.

Words written by A C Benson were added to the "Pomp and Circumstance March" and the song is now commonly known as "Land of Hope and Glory". After the First World War, Elgar came to despise the piece, considering it too jingoistic.
2. Julie Andrews won an Academy Award for Best Actress for "The Sound of Music".

Though Julie was nominated for the award, it went to Julie Christie for "Darling". Julie Andrews did win the award in 1964, for "Mary Poppins".

In 1997 she underwent surgery on her vocal cords and feared that she would never sing again. However, she sang again on film in "The Princess Diaries 2" in 2004.
3. We stay in the world of music for our next Briton, who didn't actually arrive in Britain until he was seventeen. Where was Queen frontman Freddie Mercury born?

Freddie was born Farrokh Bulsara in 1946. His family were from India. They left Zanzibar for England as a result of the Zanzibar Revolution. Freddie died from an AIDS related illness in 1991.
4. When this man died in 1922, the telephone service in the USA was halted for one minute as a tribute. Who was he?

Alexander Graham Bell's father and grandfather were experts in the field of elocution, and both Alexander and his brother inherited the family interest. Though his middle name always seems to be used, he did not acquire this until he was aged eleven. He was jealous of both his brothers for having middle names, and his father allowed him to take the middle name of Graham, after a family friend.

He was born in Scotland in 1847 but the family moved to Canada after he contracted tuberculosis, a disease which killed both of his brothers.

Bell's patent for the telephone was granted in 1876 and within ten years around 150,000 Americans owned telephones.
5. Harry Webb was born in India in 1940. He had his first hit record in 1958 and without a shadow of a doubt we can congratulate him on a successful career, which has lasted for fifty years and is still going strong. He was knighted in 1995. By what name do we know him?

Cliff has gone from being something of a "bad boy" rocker in the fifties to a national institution today. His first group was The Quintones, a skiffle group formed in 1957. Cliff acquired a backing group, The Drifters, for his 1959 hit "Living Doll". They later had to change their name because of a dispute with the American group with the same name, and became The Shadows.
6. Which Conservative politician gave the controversial "Rivers of Blood" speech in 1968?

Enoch Powell (1912-1998) gave his famous, or infamous, speech in April 1968. In it, he criticised uncontrolled immigration and anti-racial discrimination legislation, stating that it would give non-British born people an advantage over those who were born here.

It effectively ended his career in the Conservative Party. He had been tipped to take over as leader, but instead was sacked from his post in the Shadow Cabinet. He also strongly opposed Britain's entry into the European Economic Community.

Robert Scott led a party in attempt to be the first man to reach the South Pole. The party of himself and four others reached their destination on 17 January 1912, only to find that Norwegian Roald Amundsen had reached it on 14 December, 1911. Scott's party failed to complete the return journey. Two of the party members had already died by the time that Scott and his two remaining companions pitched camp for the last time. They were prevented from carrying on by appalling weather conditions. From entries in Scott's diary, he is thought to have died on 29th March, nine days after they had pitched camp. It is presumed that the men died from exposure and hunger.

Although Scott is widely regarded as a hero. Nowadays it is thought that poor preparation and planning on his part was largely responsible for the failure of the project.
8. Which famous Briton died as a result of a motorcycle accident near Wareham, Dorset, in 1935?

T E Lawrence (b. 1888) is rather better known as "Lawrence of Arabia". He died six days after the accident. One of the doctors involved later started a study of head injuries in motorcyclists, which led to crash helmets becoming widely used.
9. Florence Nightingale is famous for revolutionising the nursing profession. Where was she born?

Florence Nightingale (1820-1910) was born in Florence to English parents, and named after her birthplace. Her older sister had the misfortune to be born in a district of Naples and was saddled with the name Parthenope.

Despite her wealthy family's objections, Florence was determined to enter the nursing profession. Though she is famous for improving the military hospitals in the Crimea, she also made nursing a respectable profession.
10. It's rather surprising to find our next Briton on the list, as there's no firm evidence that he ever existed! However, according to legend, what was King Arthur's surname?

The character of King Arthur may well be based on leader who defended post-Roman Britain against Anglo-Saxon invasion in the fifth and sixth centuries. Mediaeval writers embellished the myth, adding other knights and the element of chivalry.

Presumably those who voted for him were supporting the idea of the lone hero defending his country from foreign invasion. However, they may have been voting for a modern day eco-warrior formerly known as John Rothwell, who now goes by the name of Arthur Pendragon and claims to be a reincarnation of the legendary figure.
Source: Author Supersal1 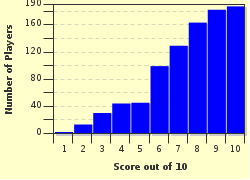