Here is the sixth in my series of quizzes inspired by the BBC public vote to find the 100 greatest Britons of all time. This quiz covers 50-41, in reverse order.

Quiz Answer Key and Fun Facts
1. John Wesley is credited with being the founder of the Methodist movement. In what century did he live?

John Wesley (1703-1791) was an Anglican clergyman. He felt that ordinary people were excluded from the church, and he was often banned from airing his views from the pulpit. He began preaching in the open, bringing the church to the people. He strongly believed that people should be Christian in deed as well as in word. As well as preaching, he was a campaigner against social injustice and an opponent of the slave trade.
2. In 1580 Francis Drake sailed his ship "The Golden Hind" into Plymouth harbour, after successfully circumnavigating the globe. However, the ship had undergone a change of name part of the way through the voyage. What was its original name?

Francis Drake (c. 1541-1596) was a sailor, explorer and politician. He renamed his ship mid-voyage as a golden hind featured on the coat of arms of one of his sponsor, Christopher Hatton. Drake was the first Englishman to circumnavigate the globe. He was Vice Admiral of the fleet that defeated the Spanish Armada in 1588.
3. Which Scottish hero died a traitor's death by the order of King Edward I?

William Wallace (c.1270-1305) was a Scottish knight who fought for Scottish independence. His greatest victory was at the Battle of Stirling Bridge in 1297, where the vastly outnumbered Scots inflicted a crushing defeat on the English. He was eventually captured and found guilty of treason. He was hung, drawn and quartered at Smithfield.

Mel Gibson directed and starred in the 1995 film "Braveheart", which professed to tell the story of William Wallace. However, this version on events relies heavily on folklore and myth rather than facts.
4. Pilot Douglas Bader lost both his legs in an aircraft crash in World War II.

Douglas Bader (1910-1982) was a commissioned officer in the RAF. He was part of his squadron's aerobatic team. In December 1931 he misjudged a low roll, the tip of the wing brushed the ground and the plane crashed, resulting in Bader losing one leg above the knee, the other below. A later entry in his log book read "Crashed slow rolling near ground, bad show."

He didn't pilot a plane again for seven years but with the outbreak of World War II, he persuaded the RAF to take him on as a pilot again. He shot down 22 enemy aircraft before having to bale out over France. He was taken as a prisoner of war and after escaping once, was imprisoned in Colditz Castle.

After the war he worked tirelessly for charities for the disabled and was knighted in 1976.
5. Singer Boy George fronted which group?

Names originally considered for the group were "In Praise of Lemmings" and "Sex Gang Children". Culture Club reflected the group's ethnic mix - an Irish singer, a Jewish drummer, an Afro-Caribbean bassist, and an English guitar player.

Boy George was born George O'Dowd in 1961. His musical career took a downturn as his heroin addiction took over. He has enjoyed renewed success since the 1990s as a DJ, and also runs his own clothing line. In December 2008 he was convicted of imprisoning a male escort in his flat.
6. What is considered to be politician Aneurin Bevan's greatest achievement?

Aneurin Bevan (1897-1960) was born in South Wales. His father was a miner. He became Member of Parliament for Ebbw Vale in the 1929 General Election. As Minister for Health, he oversaw the introduction of the National Health Service in July 1948. One of the underlying principals of the NHS was that "no society can legitimately call itself civilized if a sick person is denied medical aid because of lack of means".

In 1951 he was appointed Minister of Labour, but resigned when prescription charges for glasses and dental care were introduced. Quite what he would make of today's NHS is anyone's guess.
7. John Logie Baird (1888-1946) was a pioneer in the development of what piece of technology?

John Baird demonstrated a televised image to a reporter and members of The Royal Institute in January 1926. In 1928 he made the first transatlantic television transmission. The BBC used his broadcasting systems from 1929 to 1937, when they were replaced by systems developed by the Marconi Company.
8. Which DJ once presented a radio programme called "Top Gear"?

John Peel was born in 1939 as John Robert Parker. He first worked as a DJ in the USA. On his return to Britain, he worked on the pirate radio station Wonderful Radio London. He started working for BBC Radio 1 from its start in 1967, and was still presenting on the show at the time of his death in 2004. John Peel despised middle of the road pop music and was instrumental in popularizing the punk movement in Britain.
9. Which of these men is credited with the invention of the jet engine?

Frank Whittle (1907-1996) first mooted the idea of a jet engine in a thesis for his RAF Officer Training Course. He patented the idea in 1930, but the RAF thought it impractical. He continued developing the idea and the first test flight using Whittle's engine took place in May 1941.

However, German engineer Hans von Ohain had also been independently developing a jet engine, and his prototype first flew in August 1939. He and Whittle are both credited with the invention.
10. Which famous author created such characters as Dick Swiveller, Fanny Squeers and Chevy Slime?

Charles Dickens (1812-1870) was born in Portsmouth and died in Kent. Though he expressed a wish to be buried in Rochester Cathedral, he is interred in Poets' Corner in Westminster Abbey.

Many of the characters in Dickens' books were based on people he had met during his life, although mercifully, the majority of the names are fictitious! Dick Swiveller appears in "The Old Curiosity Shop", Fanny Squeers in "Nicholas Nickleby" and Chevy Slime in "Martin Chuzzlewit".
Source: Author Supersal1 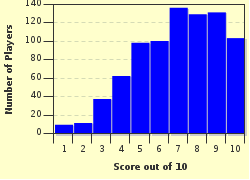