Here is the fourth in my series of quizzes inspired by the BBC public vote to find the 100 greatest Britons of all time. This quiz covers 70-61, in reverse order.

Quiz Answer Key and Fun Facts
1. Whose novels included "Pride and Prejudice" and "Sense and Sensibility"?

Jane Austen (1775-1817) achieved little fame during her lifetime, as her novels were published anonymously. Although they were well received by those who read them, they did not enjoy a wide audience. In 1869 her nephew James Austen-Leigh published a biography "A Memoir of Jane Austen", and it was after this that her popularity really took off.
2. Who was captain of the England football team when they won the World Cup in 1966?

All of the other names mentioned have also been England captains, and Alf Ramsey was the manager of the victorious 1966 World Cup squad.
3. What is William Caxton credited with introducing to England in the fifteenth century?

The precise dates of William Caxton's birth and death are not know, but his date of birth is thought to be anywhere from 1415-1422, and his date of death 1492. He was a merchant in the flourishing mediaeval wool trade. While staying in Cologne he learned the craft of printing.

Whilst in Bruge, he set up his own printing press. Upon his return to England he set up a printing press in Westminster. It is thought that one of the first books to be printed on this press was Chaucer's "Canterbury Tales".
4. Former Prime Minister Tony Blair was Member of Parliament for which constituency?

Anthony Charles Lynton Blair was born in Edinburgh in 1953. He was Prime Minister from May 1997 to June 2007, when he stood down. Under his leadership, the Labour party won three General Election victories. He was also the youngest person to be elected Prime Minister in the twentieth century.
5. Born in London in 1889, this actor's trademarks were a bowler hat, toothbrush moustache and a cane. What was his surname?

Charlie's "Little Tramp" character first appeared in 1914, and was last featured in the film "Modern Times" (1936). By this time, "talkies" had pretty much taken over from silent films and Charlie didn't want the character to switch to speaking roles. Charlie Chaplin also composed the song "Smile" for "Modern Times". He died in Switzerland in 1977.
6. George Stephenson (1781-1848) was a pioneer in what field?

George Stephenson left school at the age of fourteen and later continued his education at evening classes. He started his working life in a colliery and became a colliery engineer. He was instrumental in the development of the Stockton and Darlington railway line and the first locomotive to run on it, The Locomotion. He also assisted in the development of the British railway system and the standard railway gauge used today is still known as the Stephenson gauge.

His crowning achievement was his work on the construction of the Liverpool and Manchester Railway (L&MR), which opened in 1830, and the "Rocket".
7. James Connolly (1868-1916) was a leading figure in the 1916 Easter Rebellion in Dublin. Though Irish, he was voted on to the list. How did he die?

James Connolly's parents were Irish, but had emigrated to Scotland, where James was born. At the age of fourteen he joined the British Army and spent seven years stationed in Ireland. He hated the way that the Army treated the Irish and discharged himself from the Army. He was an active socialist and trade unionist and founded the Irish Labour Party.

He was commandant of the Dublin Brigade in the Easter Rebellion and was very badly wounded in the fighting, and was not expected to survive his injuries. Despite this, he was still sentenced to be executed for treason. He was executed in a courtyard of Kilmainham Jail in May 1916. He was transported to the jail by ambulance and carried in on a stretcher. He was too badly wounded stand in front of the firing squad and had to be tied to a chair.
8. Sir David Attenborough is perhaps best known for his superb nature documentaries. However, as Controller of BBC2, what did he introduce to the UK on 1st July 1967?

He also introduced "Match of the Day", "The Old Grey Whistle Test" and Monty Python's Flying Circus. He has been making natural history programmes for over fifty years, and is thought to be possibly the most travelled person on earth. He was awarded a knighthood in 1985.
9. Which of The Beatles formed the film production company HandMade Films?

George Harrison (1943-2001) was known as "The Quiet Beatle". Together with partner Denis O'Brian, he formed HandMade Films in 1979 to finance the film "Monty Python's Life of Brian" after the original backers had dropped out, fearing the subject matter was too controversial.

George organised the Concert for Bangladesh in 1971 to raise funds to help war refugees in Bangladesh.
10. This lady's birth name was Elizabeth Bowes-Lyon. Who is her famous offspring?

Elizabeth Bowes-Lyon (1900-2002) became known as Queen Elizabeth, the Queen Mother, on the death of her husband King George VI in 1952.

She became a symbol of hope and resistance during World War II. After Buckingham Palace was bombed during World War II, she is famously quoted as saying "I'm glad we've been bombed, it makes me feel I can look the East End in the face". Although this quote is generally used to show the royal family's solidarity with the general population, many people had lost everything in air raids and felt that this remark was tactless in the extreme, as the Royal Family hadn't exactly been left homeless!
Source: Author Supersal1 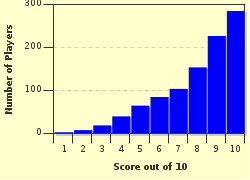