Here is the third in my series of quizzes inspired by the BBC public vote to find the 100 greatest Britons of all time. This quiz covers 80-71, in reverse order.

Babbage's "difference engine" was an early type of calculator. He drew up plans for a second, more complex "difference engine" but this was not built until 2002. It comprised around 8,000 parts and weighed five tons, so it was a little difficult to have perched on one's desk! He also designed an "analytical engine", which could be programmed using punchcards.
2. The next person on the list was Britain's last Liberal Prime Minister in the twentieth century. Who was he?

David Lloyd George (1863-1945) was Prime Minister from 1916-1922. He was born in England but was of Welsh descent. His family returned to live in Wales when he was an infant. English was his second language, his first being Welsh. As Chancellor of the Exchequer he was largely responsible for many welfare reforms, such as state aid to the sick, old age pensions and unemployment benefit.
3. Edward Jenner (1749-1823) was credited with inventing a safe and effective vaccination against which disease?

Edward Jenner was a country doctor. He had heard the old wives' tales that folk who worked with cattle didn't contract smallpox, and from his own observations found this to be true. However, they did contract the relatively mild disease of cowpox, and in fact there are records of farmers deliberately exposing their families to cowpox to give them immunity from the dreaded smallpox. There had been attempts at vaccination by actually using the smallpox virus, but this was very risky.

Jenner refined this technique by infecting a young boy with material taken from cowpox blisters from a young milkmaid. The boy caught cowpox and recovered. Jenner then infected him with material from smallpox blisters, but the boy did not develop the disease.

His theories were initially treated with scepticism but were eventually taken up by the medical establishment. He refused to patent his invention, on the grounds that it should be available to all, not just the rich.

The word vaccination comes from the Latin for cow - vacca.
4. Enough people thought that singer Robbie Williams was a great enough Briton to appear on the list. Oh well, each to their own. Robbie was a member of which boy band from 1990-1995?

The Tomb of the Unknown Warrior represents all those who fell in WWI and have no marked resting place. In 1920, several bodies were exhumed from unmarked graves in various areas of the Western Front. Each was covered with a Union Jack, and one was chosen as the Unknown Warrior. On interment in the abbey, the coffin was covered with soil from the main battlefields, and buried beneath a slab of black marble. It is the only tomb in Westminster Abbey that visitors are forbidden to walk on.

When Elizabeth Bowes-Lyon (the mother of Queen Elizabeth II and consort to George VI) married she placed her bouquet on the tomb. This has become a tradition for every royal bride who is married in Westminster Abbey. The Queen Mother wanted her funeral wreath to be placed on the tomb, and The Queen carried out this wish the day after the Queen Mother's funeral.
6. Despite being Irish, this one time member of the Boomtown Rats appears on the list. I suspect this is because of his humanitarian activities rather than for his musical contribution. He was once married to Paula Yates. Who is he?

Bob Geldof (b. 1951) was instrumental in organising the Live Aid and Live 8 concerts. He and Midge Ure wrote "Do They Know It's Christmas". Live Aid has raised over Ł150,000,000 and Bob received an honorary knighthood in 1986. He has also been nominated for the Nobel Peace Prize.
7. Which Scottish leader is said to have been inspired by a spider's repeated attempts to spin a web?

Robert the Bruce (1274-1329) was crowned King of Scotland in 1305. He was not acknowledged as King by the English, and the two countries continued to fight a series of battles, culminating in the Battle of Bannockburn in 1314. King Edward III of England signed the Treaty of Edinburgh-Northampton in 1328. This recognised that Scotland was an independent country.
8. Aleister Crowley (1875-1947) was known as "The wickedest man in the world". What were his given names?

Aleister Crowley was born into a strict Plymouth Brethren family, and rebelled against their teachings at an early age. He changed his name to avoid comparisons with his father, who shared the same name. Aleister Crowley is associated with the occult, drug taking and sexual permissiveness. I'm not sure why he is on the list of 100 Greatest Britons. I suspect that had he been born in a later age, no-one would have taken very much notice!
9. Which King was victorious at the Battle of Agincourt?

Henry V (c. 1386-1422) started his military career at an early age, sustaining a serious wound at the battle of Shrewsbury in 1403. He was named as heir to the throne of France under the Treaty of Troyes in 1420. However, he died (probably of dysentery) in 1422.
10. What organisation was founded by William Booth in 1865?

William Booth (1829-1912) was a Methodist preacher. He also firmly believed that it was his Christian duty to assist those less well off than himself. He and his wife Catherine founded the Whitechapel Christian Mission in the socially deprived East End of London in 1865, to assist the poor of that area. By 1878 this had been reorganised on military lines, and from then on was known as the Salvation Army. Today the Salvation Army is active in over one hundred countries.
Source: Author Supersal1 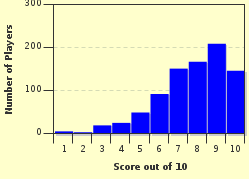