Most of the 'names' this quiz deals with still survive in the collective memory of the British people.Some of them are even looked up to with great respect.The mix is from all periods of English history.

Quiz Answer Key and Fun Facts
1. Who was the English Crimean war heroine who had for a first name the name of the Italian city where she was born and as her surname the name of a 'sweetly singing' bird ?

..or the Lady with the Lamp. Born in Florence, Italy, 1820. By the time she died in 1910, she had reformed the British nursing service and had caused thousands of little girls to be christened Florence in her honour.
2. Which of these Citygates of London refers to one of the first British Kings?

Moorgate might be a 'Gate' leading out to the moors outside the citywalls. Aldgate was probably NOT the antithesis of Newgate, but a corrupted form of ...ALEgate. And Aldersgate seems to refer to the Aldermen of the city. Ludgate has mostly been explained as the Gate built by King Lud whoever that may have been. No link with the Luddites, the rioting 19th century handicraftsmen. Anyway King Lud Hudibras is said to have been the father of King Lear.
3. A number of coastal cities were specially selected as ports that were to bear the burden of defending England from Continental attacks. Rye, Deal, Sandwich,..were such ports. At first there were only five, they were called the CINQUE ports and the person in charge of surveying their military readiness was called the Warden of the Cinque Ports. Which of these celebrities is the only one never to have been given that (now mostly honorary) function?

Though an excellent amateur yachtsman, Edward Heath never made it to this honorary job. Mrs Thatcher may not have been willing to entrust him with the task of keeping the Europeans out of Britain.
4. Who was the leader of the defenders of Mafeking in South Africa during the 217 day long siege of that place?

The founder of the Boy Scouts was also a military man. Sir Winston Churchill was a young officer during the War against the Boers. Lord Kitchener, well we all know his 'Poster'. Smuts was a co-founder of the Union of South Africa.
5. Which of these English Kings got the nickname Fighting Harry ?

Henry V showed his mettle at the battle of Agincourt on St.Crispin's day, 25th of October 1415. Henry II Plantagenet did a lot of in-fighting with his sons (Richard Coeur de Lion; John Lackland etc.) and also with his wife Eleanor, but did not go to war that often.

Henry VII put an end to the War of Roses. Henry VIII took part in some fighting against Francis I in the North of France, but that was merely for practice and to do a favour to his first wife's nephew Charles V of Spain.
6. Which of these items should NOT be associated with Sir Walter Raleigh's life (yes there are some orthography variants...)?

Raleigh was a favourite of Elizabeth I, but he was not in the good books of King James I. He was involved in the importing of both the potato and the tomato into England. Raleigh wrote a 'History of the World' but did never practise map-making.
7. Jane Shore lived in luxury among kings and courtiers. Yet she died in poverty. Which of these had she NOT been a mistress of?

She married young and her first husband William Shore, a goldsmith, was already a good catch. After Edward IV's death she found shelter in the arms of Lord Hastings. When Lord Hastings was beheaded at the orders of Richard III she found a new lover in the person of the Marquis of Dorset.A medieval ballad tells in graphic detail (but without much proof) of her death by starvation in a ditch.
8. Who was the one and only Englishman ever to become Pope?

Breakspear was born at Langley, near Hitchin. There is a village named Abbot's Langley nearby. Breakspear took the name Adrian IV and died in Italy in 1159.
9. Who was the Judge that after the Duke of Monmouth's rebellion sentenced about 300 prisoners to be hanged, had another 800 transported and sentenced many others to imprisonment or whipping?

Judge Jackson was the U.S.A. judge who in 1999 determined that Microsoft was a monopoly. Judge Toby ..well there are Toby Jugs, but not specially a Judge Toby. Lord Denning is a 20th century character in the history of English law. Ultimately Judge Jeffreys was locked up himself in the Tower when the master he wanted to serve, James II, had to flee from England.
10. Who was Old Parr (as in the pub's name Old Parr's Head) and what made him famous?


Answer: a man who was reputed to have grown very old

It was believed he was born in 1483 and died in 1635. The Earl of Arundel took him along to the court of Charles I for 'display'.
Source: Author flem-ish 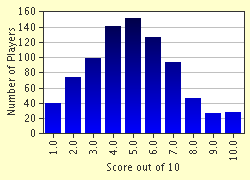