Speeches reveal the personality of their orators but also reflect a great moment in history. Match speech and speaker and have fun!

The East German government built the Berlin Wall in 1961 to stop people from migrating to West Berlin. Kennedy rejected appeals to to smash it down, but when visiting Berlin on 26 June 1963 he delivered the passionate speech "Ich bin ein Berliner", in which he defined the Wall as the "most obvious and vivid demonstration of the failure of the Communist system".
2. "Love begins at home."

Mother Teresa delivered this speech accepting the Nobel Peace Prize on 11 December 1979 in Oslo, Norway.
3. "The only thing we have to fear is fear itself."

Roosevelt's first inaugural speech in 1933 showed his powers of leadership in a country experiencing economic depression. He was the only US president to win four consecutive elections.
4. "I'm happy, tonight. I'm not worried about anything. I'm not fearing any man."

This quote by Martin Luther King Jr. ended his last speech the day before he was shot while standing on the balcony of a motel in Memphis, Tennessee.
5. "Freedom of choice is a universal principle to which there should be no exceptions."

The speech Mikhail Gorbachev delivered to the United Nations on 7 December 1988 was in effect a declaration that the Cold War was ending and marked the beginning of a new era in world politics.
6. "I am here as a soldier who has temporarily left the field of battle."

This striking woman founded the Women's Social and Political Union which fought aggressively for female suffrage in Britain. She delivered this speech on 13 November 1913.
7. "I have nothing to offer but blood, toil, tears and sweat."

The "greatest Briton" was appointed Prime Minister of the British coalition government in May 1940 in World War II. These words are from his first speech to the House of Commons as Prime Minister.
8. "Our languages are the reflection of ourselves."

This sentence was part of a plea for India to reclaim its own culture, language and independence after years of British domination. Gandhi delivered the speech in Varanasi, India, on 4 February 1916, long before India got its independence.
9. "Tell me what you love, and I will tell you who you are."

Pope John Paul II delivered this speech during his second visit to his homeland, Poland, on 18 June 1983 at a critical time for Eastern Europe, which ended by the toppling of the Communist regimes in that region in 1989.
10. "I have the heart and stomach of a king."

Quote from a speech by Queen Elisabeth I to the English troops at Tilbury in 1588, shortly before the defeat of the Spanish Armada.
Source: Author mattimom 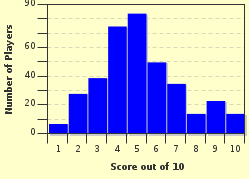 
Other Destinations
Explore Other Quizzes by mattimom