And You Can Quote Me On That Trivia Quiz

Throughout the ages people have said some pretty nasty - and hilarious - things about other people. See if you can identify these zingers said by the famous about their enemies. Please note: some of these quotes exist in slightly differing versions.

Share on Facebook
Share on Twitter
Share by E-Mail
Author
daver852
Time
6 mins
Type
Multiple Choice
Quiz #
369,165
Updated
Dec 03 21
# Qns
10
Difficulty
Difficult
Avg Score
4 / 10
Plays
509
This quiz has 2 formats: you can play it as a or as shown below.
Scroll down to the bottom for the answer key.

Quiz Answer Key and Fun Facts
1. Which presidential daughter is credited with this statement: "If you haven't got anything nice to say about anybody, come sit next to me"?

Alice Roosevelt Longworth (1884-1980) was quite a character. The eldest child of Theodore Roosevelt, and his only child by his first wife, Alice Hathaway Lee, Alice Roosevelt was known for behaving in a most unladylike fashion from a young age. She smoked cigarettes in public, rode in motor cars with young men, and stayed out late at parties. Her father said, "I can run the country, or I can control Alice, but I can't possibly do both."

She was also known for her frank, outspoken manner, and her biting wit. She once said of Calvin Coolidge that "he looks like he was weaned on a pickle." Alice lived to the ripe old age of 96, and never changed her ways, remaining feisty and high-spirited right up until the end.
2. What Restoration wit penned these words about King Charles II: "We have a pretty witty King / Whose word no man relies on / Who never said a foolish thing / And never did a wise one"?

King Charles was not too upset; he responded by saying that the poem was true, because his words were his own, while his actions were those of his ministers.

John Wilmot (1647-1680) was one of the most notorious rakes of Restoration England, and considering the moral climate of the time, that's saying a mouthful. He was known for his heavy drinking, debauchery, and for his witty, but often obscene, poetry. He also did some translations and writing for the theatre. He was in and out of royal favor most of his life, and frequently in trouble because of his outrageous behavior. He died at age 33, his death usually attributed to alcoholism and venereal disease. He supposedly made a deathbed conversion to Christianity and asked that all his writings be burned. In 2004 a film starring Johnny Depp, "The Libertine," based on Wilmot's life, was released.
3. Some of the most witty insults have been said by women about other women. Who is credited with the line, "That woman speaks eight languages, and can't say 'no' in any of them"?

A similar quote is credited to Bette Davis: "There goes the good time had by all."

Dorothy Parker (1893-1967) was so famous for her wicked, witty sayings that many things are attributed to her that were actually said by other people. It isn't even certain that she said the line I quoted, but it was attributed to her by her friend, Alexander Woollcott. The object of her disdain has been variously described as an anonymous woman at a party, or the actress, Merle Oberon.

There is another famous story concerning Parker and Clare Boothe Luce. The two women arrived at a restaurant at the same time, and Luce stepped aside to let Parker enter, saying "Age before beauty." Without missing a beat, Parker replied, "Pearls before swine," and walked through the door. Mrs. Robert Benchley, who witnessed the incident, said it was true, although the other woman was not Clare Boothe Luce, but a chorus girl.
4. Edward Livingston, a Congressman from Louisiana, was the target of one of the most famous political insults in history. Who said about Livingston, "He is a man of splendid abilities, but utterly corrupt. Like rotten mackerel by moonlight, he both shines and stinks"?

John Randolph of Roanoke (so-called to distinguish him from a number of other prominent men of that name) was born in 1773 into an old and distinguished Virginia family. A boyhood attack of tuberculosis had affected his sexual development and left him beardless, and with a peculiar, high-pitched voice. It had not, however, robbed him of his courage nor dulled his razor sharp wit. He was a passionate supporter of states' rights and limited government.

One of his most famous enemies was Henry Clay, with whom he once fought a duel. A famous story tells of a time when Clay and Randolph met each other on a narrow sidewalk, either side of which was covered in deep mud. Clay glared at Randolph and said, "I never step aside for scoundrels." Randolph smiled and stepped into the mud, replying "I always do." Yet another political foe, Richard Rush, was described this way by Randolph: "Never was ability so much below mediocrity so well rewarded; no, not even when Caligula's horse was made a consul."
5. Perhaps due to a string of successful movies based on her works, Jane Austen is now held in high esteem as an author by many people. But not everyone has been an admirer. Who said, "Just the omission of Jane Austen's books alone would make a fairly good library out of a library that hadn't a book in it"?

Twain was another of those people who said so many witty things that other people's quips were often attributed to him. But there is no doubt he disliked Jane Austen. He also wrote, "Her books madden me so that I can't conceal my frenzy from the reader; and therefore I have to stop every time I begin. Every time I read 'Pride and Prejudice' I want to dig her up and beat her over the skull with her own shin-bone."

One should not attribute Twain's criticism to sexism; he was also pretty much down on James Fenimore Cooper, and the entire country of France as well.
6. Sometimes whole areas come in for condemnation. What famous Civil War figure is quoted as saying, "If I owned both Hell and Texas, I'd live in Hell and rent out Texas"?

General Philip Sheridan (1831-1888) led Grant's cavalry during the final stages of the Civil War, and became famous for his Shenandoah Valley campaign, which prevented the Confederacy from obtaining badly needed food and supplies from that fertile region of Virginia. After the war, Sheridan gained fame as an Indian fighter, and is supposed to have remarked, "The only good Indian is a dead Indian," although he repeatedly denied saying this.

The quote about Texas actually has nothing to do with the Civil War. In 1855, soon after graduating from West Point, Sheridan was visiting Fort Clark, near modern day Brackettville, Texas when one of the officers in the mess asked him what he thought about the state. The remark must have struck some present as being quite funny, because it was widely repeated.
7. Winston Churchill is another man known for his venomous insults. Who did Churchill variously describe as "a modest man, who has much to be modest about" and "a sheep, in sheep's clothing"?

Clement Attlee was the leader of Britain's Labour Party from 1935-1955, and became Prime Minister on July 26, 1945 after defeating Churchill's Conservative Party in the first elections held after WWII. He remained in power until 1951, when he was defeated and Churchill once again took the office. Attlee is responsible for many of the socialist programs that still exist in the United Kingdom today.

Churchill was also credited with, "An empty cab pulled up to 10 Downing Street - and Clement Attlee got out," although he often denied saying it.

Perhaps the most famous example of Churchill's acerbic wit was an exchange he had with Lady Astor. She said, "Winston, if you were my husband, I would put poison in your tea." Without batting an eyelash, he replied, "Madam, if I were your husband, I should drink it."
8. One would think that creative people - artists, musicians, and the like - would come up with creative insults. Well, they do say nasty things about each other from time to time. Who said, "Wagner has beautiful moments but awful quarter hours"?

Poor Wagner has been the subject of many insults through the years; my favorite is by American humorist Bill Nye: "Wagner's music is better than it sounds." This is often misattributed to Mark Twain.

Gioachino Rossini was a very successful composer, producing some 39 operas during his lifetime. He is probably most famous for writing "The Barber of Seville." Another of his quips about Wagner was, "One can't judge Wagner's opera 'Lohengrin' after a first hearing, and I certainly don't intend to hear it a second time."

As for Wagner, he reportedly said, "After he is dead, who will there be to defend Rossini's music?"
9. Artists have frequently been the target of some rather nasty witticisms. Who was the man, an artist himself, who declared, "Abstract art is a product of the untalented, sold by the unprincipled to the utterly bewildered"?

Al Capp (1909-1979) was the son of Latvian Jewish immigrants. Walking around the Chicago Art Institute and looking at some of the things hanging on its walls, it is difficult to suppress the notion that Mr. Capp may have been on to something.

Al Capp was once described by one of his former employees as "exasperating, infuriating, domineering, obnoxious, loud, lots of fun, acidic and lovable." He is most famous for creating the incredibly popular comic strip, "Li'l Abner." During the 1960s and 1970s, Capp grew increasingly conservative in his outlook, and used his comic strip to poke fun at many counterculture figures. This resulted in numerous clashes with protesters on college campuses where Capp was scheduled to speak, but Capp actually seemed to enjoy the confrontations.
10. What man, known as "The Sage of Baltimore," had this to say about President Harry S. Truman: "If there had been any formidable body of cannibals in the country he would have promised to provide them with free missionaries, fattened at the taxpayers' expense"?

Henry Louis Mencken (1880-1956) was for many years a writer for the "Baltimore Sun." He combined a brilliant mind and a superb grasp of the English language with a a cynical and misanthropic wit. It is a shame that he is not better appreciated today. Among his better known zingers are "On one issue, at least, men and women agree: they both distrust women" and "No one ever went broke underestimating the taste of the American people."
Source: Author daver852

This quiz was reviewed by FunTrivia editor bloomsby before going online.
Any errors found in FunTrivia content are routinely corrected through our feedback system.
Most Recent Scores
Jan 25 2023 : Guest 175: 5/10
Dec 12 2022 : Guest 136: 0/10 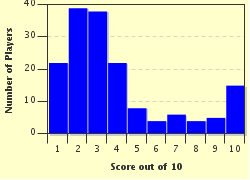