A wee quiz about quotations and mis-attributions.

Quiz Answer Key and Fun Facts
1. Who said: "O what a tangled web we weave, when first we practise to deceive"?

This quotation comes from Scottish novelist and poet Sir Walter Scott (1771-1832) and was used in 'Marmion' published in 1808. However, it seems to be regularly misattributed to the Bard of Avon, much to the annoyance of Scots worldwide.
2. Who said: "It's more than a game. It's an institution"?

From Thomas Hughes's famous novel, 'Tom Brown's Schooldays'. Hughes was a novelist, reformer and jurist. He was actually talking about cricket. Many people mistake this for Liverpool F.C. manager Bill Shankly's quote about football (soccer) not being a matter of life or death but being more important than that.
3. Who said: "Greater love hath no man than this, that he lay down his friends for his life"?

Jeremy Thorpe MP after Prime Minister Harold Macmillan sacked half the cabinet in 1962. If you didn't read the quotation properly you might have gone for one of the World War One poets. Thorpe was cleverly (well clever for a politician anyway!) inverting a well-known piece of war poetry and verse from St. John's Gospel.
4. Marie Antoinette actually said (in French of course):

None of the above - Marie Antoinette, Queen of France (1755-1793) isn't recorded as saying any such thing. The earliest claim that she said 'Qu'ils mangent de la brioche' - 'Let them eat brioche' (usually misrendered as 'cake') dates from 1843, fifty years after her execution!
5. Which sportsman said: "Honey, I just forgot to duck"?

Jack Dempsey (1895-1983), World Heavyweight Champion from 1919-1926 said this to his his wife after losing the World Heavyweight title bout in 1926. It has since been paraphrased by others - See below.
6. Which non-sportsman, paraphrasing the above, said: "I forgot to duck"?

Phineas Barnum of Barnum & Bailey's Circus (established 1871). The great showman was well-known for making disparaging quotes about the American public. He also famously countered that he could never lose money or lose out otherwise by underestimating the intelligence of the public.
8. From which of the Bard's plays is "If music be the food of love, play on; Give me excess of it, that, surfeiting, The appetite may sicken and so die." taken ?

From "Twelfth Night (or What You Will)" by Shakespeare, this is the opening line of the play and is spoken by the Duke of Illyria.
9. From which of the Bard's plays is "Be not afraid of greatness: ... Some are born great, ... Some achieve greatness, ... And some have greatness thrust upon them." taken ?

"Twelfth Night", again - sneaky Huh? But this is from Act III, Scene IV and is spoken by Malvolio.
10. Who wrote the appalling doggerel: "O, my Luve's like a red, red rose That's newly sprung in June; O my Luve's like the melodie That's sweetly played in tune."

'Rabbie' Burns (1759-1796) - Hoots Mon ! Burns was usually a bit better than this but seems to have sunk to the level of a limerick on this occasion. The well-loved Scottish poet is celebrated worldwide with whisky (not in Saudi Arabia), haggis and poetry. Burns Night is on the 26th January and always begins with the bagpiping in of and address to the haggis.
Source: Author Ivan Drago 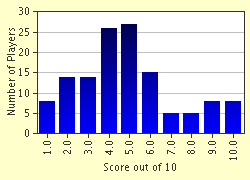 
Other Destinations
Explore Other Quizzes by Ivan Drago