I Wish I'd Said That Trivia Quiz

Possibly the only time politicians make us laugh intentionally is when they insult each other. Following are some of the best political insults (and two which are only tenuously linked to politics, but deserve to be included).

Share on Facebook
Share on Twitter
Share by E-Mail
Author
jeffa
Time
6 mins
Type
Multiple Choice
Quiz #
92,853
Updated
Dec 03 21
# Qns
10
Difficulty
Difficult
Avg Score
4 / 10
Plays
822
This quiz has 2 formats: you can play it as a or as shown below.
Scroll down to the bottom for the answer key.

Quiz Answer Key and Fun Facts
1. A classic exchange to begin. Who, when told by the Earl of Sandwich that he would either die "on the gallows or of the pox" replied, "That depends, my Lord, whether I embrace your principles or your mistress"

Wilkes (1727 -1797) was a British politician and journalist. He was jailed, released, then expelled from parliament for libel. Not surprising, if the exchange with the Earl of Sandwich is anything to go by.
Wilkes, who was repeatedly elected to parliament, and repeatedly expelled from it, has come to be seen as a champion of press freedom.
2. Even his enemies admitted Winston Churchill could turn a phrase. Which Prime Minister did he call "The Boneless Wonder" in a memorable address to parliament?

"I remember, when I was a child, being taken to the celebrated Barnum's Circus, which contained an exhibition of freaks and monstrosities, but the one which I most desired to see was the one described as 'The Boneless Wonder." My parents judged the spectacle would be too revolting and demoralizing for my tender eyes, and I have waited fifty years to see The Boneless Wonder sitting on the Treasury Bench." MacDonald (1866-1937) was prime minister in 1924, 1929-1931, and 1931-1935). Judging by the excellent TV drama, 'Winston Churchill, the Wilderness Years' his actions as premier largely consisted of going around saying (with unintended accuracy) 'this is most distressing.'
3. And on the subject of the Churchill family, Churchill's son, Randolph, once had a benign tumor removed. Which famous author commented in his diary that it was "a triumph of modern science to find the only part of Randolph that was not malignant and remove it"?

Randolph (1911-1968), who seemed to have inherited all of his father's faults and little, if any, of his father's genius, evoked that sort of response in people.
4. Across the Atlantic now: "I admire him, I frankly confess it, and when his time comes I shall buy a piece of the rope as a keepsake" was Mark Twain's barbed comment on who?

Rhodes (1853-1902) was a British colonial stateman and prime minister of the Cape Colony from 1890-1896. His determination--ruthlessness says his many critics--to advance the British cause in Africa won him as many enemies as it did friends. His legacies include the Rhodes Scholarships.
5. To whom was Benjamin Disraeli referring when he said that if "he fell into the Thames that would be a misfortune, and if anybody pulled him out, that, I suppose, would be calamity"

Gladstone (1809-1898) was British Prime Minister four times in the 19th century. His rivalry with Disrael was legendary and prompted some memorable insults, mainly from Disraeli, who described him as being without "a single redeeming defect."
Even Queen Victoria-- in what may have been an unintended insult--complained that "Mr. Gladstone speaks to me as if I were a public meeting."
6. A speech from which U.S. politician received the following comment from Harold Ickes: "I did not listen because I have a baby of my own"?

Dewey (1902-1971) was twice Republican candidate for president and twice defeated. He is best remembered today as the source for possibly the most famous U.S. newspaper mistake in the 20th century: "Dewey Defeats Truman" trumpeted the Chicago Tribune, which went to press before the 1948 election results were in, and relied instead on the prevailing conventional wisdom.
7. "How can they tell?" was Dorothy Parker's biting comment on the death of which U.S. president.

John Calvin Coolidge (1872-1933) became president on the death of Warren Harding in 1923 and was voted out of office in 1928.
8. Which president was memorably, if unkindly, said to have having "played too much football with the helmet off"?

Harold Wilson's description of Heath, who was premier from 1970-1974. Wilson (1916-1995) was the prime minister who preceeded and succeeded Heath in office.
10. Finally, which leader was described as "the man who is the source of all the misfortunes of our country"?

Said by journalist William Duane (1760-1835), who was twice charged with sedition. He was once acquitted and once had charges dropped.
Source: Author jeffa 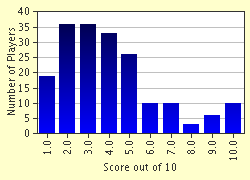 
Other Destinations
Explore Other Quizzes by jeffa