So many great minds have said things so much better than I could. You have to guess who said the following quotations.

Quiz Answer Key and Fun Facts
1. "Hollywood is a place where people from Iowa mistake each other for movie stars."

Fred Allen was a radio comedian in the 1930's and 1940's, most remembered by his on-air friendly feud with Jack Benny.

Another great quote of his about Hollywood;
"You can take all the sincerity in Hollywood, place it in the navel of a fruit fly and still have room enough for three caraway seeds and a producer's heart."
2. "No man should marry until he has studied anatomy and dissected at least one woman."

I never knew much about Honore de Balzac or his comic wit. But after reading a book of his short stories I was fascinated with his take on things. Read him.

Another of his great quotes;
"A good marriage would be between a blind wife and a deaf husband."
3. "I am not young enough to know everything."

J.M. Barrie was a Scottish author. He wrote "Peter Pan", of course. His humor seemed to have a more serious side to it. Another of his quotes; "We are all of us failures; at least, the best of us are."
4. "I have given up reading books; I find it takes my mind off myself."

Oscar Levant was a pianist, composer, and comic wit. His self deprecating humor combined with his outward lack of humility made for an unusual blend. He was a friend of famous American composer George Gershwin and after Gershwin's death, Levant eerily plays himself in Gershwin's biographical movie "Rhapsody in Blue".

A few more of his quotes;
"There's a fine line between genius and insanity. I have erased this line"
and
"Underneath this flabby exterior is an enormous lack of character"
5. "I like pigs. Dogs look up to us. Cats look down on us. Pigs treat us as equals."

Churchill, the noted statesman and Prime Minister of England during World War 2, had a great deal of wise sayings. For instance;
"Never hold discussions with the monkey when the organ grinder is in the room."
6. "One of the penalties for refusing to participate in politics is that you end up being governed by your inferiors."

Plato was a student of Socrates and a mentor of Aristotle. Can you imagine what those classes must have been like? Another of Plato's quotes;
"You can discover more about a person in an hour of play than in a year of conversation."
7. "If there are twelve clowns in a ring, you can jump in the middle and start reciting Shakespeare, but to the audience, you'll just be the thirteenth clown."

Adam Walinsky was a legislative assistant to Senator Robert F. Kennedy from 1965 to 1968. He specialized in foreign affairs and was the main speech writer for the senator. I don't know much about him but I love this quote.
8. "Pay no attention to what the critics say; there has never been set up a statue in honor of a critic."

Jean Sibelius was a Finnish composer. His "Finlandia" is a very recognizable melody even to those with the most rudimentary of classical music knowledge. A version of it can be heard here:
http://www.youtube.com/watch?v=_eTIa1KSkeI&feature=related
9. "It is difficult to produce a television documentary that is both incisive and probing when every twelve minutes one is interrupted by twelve dancing rabbits singing about toilet paper."

Rod Serling was the creative genius behind "The Twilight Zone" TV series.

Another from him;
"There is nothing in the dark that isn't there when the lights are on."
10. And finally: "Well, they put me in a booth and then did some nice things to the speaker to make it come out sounding ok."

To me, Don Knotts will always be Barney Fife, the bumbling nervous wreck of a deputy to Sheriff Andy on "The Andy Griffith Show". He didn't have a lot of quotable sayings but he was such a great comic actor that he could be envisioned saying many of the quotes in this quiz. Thanks for playing.
Source: Author transit5495 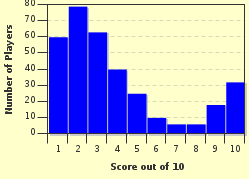 
Other Destinations
Explore Other Quizzes by transit5495