I will give you the quote and all you have to do is name the famous figure who said them.

Maya Angelou is an American poet who was born on the 4th April, 1928. Angelou is African American and her work has been complimented by the likes of Martin Luther King. Jr. Maya won her first award in 1970.It was the Chubb Fellowship award which was given to her by Yale university and allowed her to make a public address to the Yale and New Haven communities.

She has also won was the Norman Mailer Award (Lifetime Achievement) in 2013.
2. Who said this famous quote? "You know you're in love when you can't fall asleep because reality is finally better than your dreams."

Theodor Seuss Geisel is Dr. Seuss' real name. He was born on the 2nd March, 1904 and died on the 24th September, 1991. Seuss's most famous works are "How the Grinch Stole Christmas" and "The Cat in the Hat". He has won many awards including two Academy awards, two Emmy awards, a Peabody award and the Pulitzer Prize. Dr Seuss also has a star on the Hollywood walk of fame at the 6500 block of Hollywood Boulevard.
3. Who said this famous quote? "Live as if you were to die tomorrow. Learn as if you were to live forever."

Mae West was born on August 17th,1893 in New York. She was an American actress, singer, playwright and screenwriter. She won the Golden Apple Award in 1969 for female star of the year and got her own star on the Hollywood walk of fame in 1960.
5. Who said this famous quote? "Be yourself; everyone else is already taken."

Oscar Wilde was born on October 16th, 1854 in Ireland. He was a poet and writer. He died on November 30, 1900 in France aged 46. His most notable works are "The Importance of Being Earnest" and the "Picture of Dorian Gray". Wilde posthumously won the Hugo award in 1946 for Best Dramatic Presentation for the Picture of Dorian Gray. This award was shared with Albert Lewin who directed and wrote the screenplay for the film.
6. Who said this famous quote? "Never trust anyone who has not brought a book with them."

Lemony Snicket or Daniel Handler was born February 28, 1970. He is an American novelist best known for his childrens series "Series of Unfortunate Events" which consists of 13 books. The film adaptation was nominated for four Academy Awards in 2005 eventually going on to win one in the category of Best Achievement in Makeup.
7. Who said this famous quote? "I have always imagined that Paradise will be a kind of library."

Jorge Luis Borges was born on August 24, 1899 in Argentina. He was a short-story writer and a poet. He died on June 14, 1986 in Switzerland.
He won the Edgar Allen Poe Award in 1976 and went on to win the Lifetime Achievement award in 1979.
8. Who said this famous quote? "A woman is like a tea bag; you never know how strong it is until it's in hot water."

Anna Eleanor Roosevelt was born on October 11, 1884 in New York. She is the longest-serving First Lady of the United States. She always preferred to be called by her middle name 'Eleanor' rather than her first name, Anna. She died on November 7, 1962 aged 78 in New York.
9. Who said this famous quote? "I believe that everything happens for a reason. People change so that you can learn to let go, things go wrong so that you appreciate them when they're right, you believe lies so you eventually learn to trust no one but yourself, and sometimes good things fall apart so better things can fall together."

Marilyn Monroe was born on June 1, 1926 in California. She was an actress, singer and model. She died on August 5, 1962 aged 36 due to a barbiturate overdose. She got her own star on the Hollywood Walk of Fame in 1960 for her contribution to motion picture. She has also won three Golden Globes: Best motion picture actress in 1960, World Film Favourite Female in 1954 and again in 1962.
10. Who said this famous quote? "So many books, so little time."

Frank Zappa was born on December 21, 1940 in Maryland. He was a musician, songwriter and composer. He died on December 4, 1993 aged 52 in California.
He has won the Grammy Lifetime Achievement Award and the Grammy Award for Best Rock Instrumental Performance.
Source: Author poli132 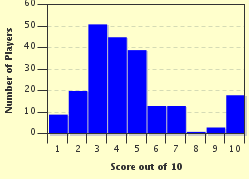 
Other Destinations
Explore Other Quizzes by poli132