I will give a quote and you pick the famous person that said it.

Quiz Answer Key and Fun Facts
1. Who said "You have to learn the rules of the game. And then you have to play better than anyone else."?

He spent his life defining the rules of science. Be it quantum mechanics, theory of relativity, mass-energy equivalence, electro magnetic field and the list goes on and on.
2. Who stated "All our dreams can come true, if we have the courage to pursue them."?

Walt began his dream as a newspaper artist. He mostly drew comic strips and political caricatures. From there he went on to create magazine, newspaper and movie advertisements. And from there, you know the rest of the story.
3. "Open your eyes, look within. Are you satisfied with the life you're living?". Who does this quote belong to?

Bob was shot in the chest and arm by a political attacker two days before a 1976 concert in Jamaica. After he performed at the concert he was asked why he did it in his condition. He answered, "The people who are trying to make this world worse aren't taking a day off. How can I?"
4. "The mind is everything. What you think, you become." Which famous person said this?

The name Buddha means "The Enlightened One". At the time of his awakening, it was said that he gained complete knowledge as to the cause of suffering and the steps to stop it.
5. "Marriage is like putting your hand into a bag of snakes in hopes of pulling out an eel." Who made this statement?

Leonardo never got married. The closest relationship, which was non-sexual, was with a woman by the name of Cecilia Gallerani. Historians are still arguing as his sexual preference.
6. Who said "Mankind must put an end to war or war will put an end to mankind."?

In 1962, the second possibility almost came true with the Cuban Missile Crisis, which almost led to nuclear war with the Soviet Union.
7. Who made the statement "A career is wonderful, but you can't curl up with it on a cold night."?

Marilyn's career consisted of ten movies from 1948-1960. With three marriages and numerous affairs, I don't think she got chilled on very many nights.
8. "Money won't create success, the freedom to make it will.". Who is responsible for this quote?

Gandhi was dedicated to a wider purpose of discovering truth. He did this by conducting experiments on himself and learning from his own mistakes.
10. Who said "A goal is not always meant to be reached, it often serves simply as something to aim at."?

There weren't too many goals that Bruce aimed at that he didn't achieve. He became a master and teacher of martial arts. He was also an actor, writer, director and choreographer - all before his untimely death at age 32.
Source: Author Rhyno53 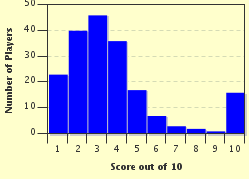 
Other Destinations
Explore Other Quizzes by Rhyno53