Many fascinating people throughout history have shared the first name Isaac. Let's meet a few of them, shall we?

Share on Facebook
Share on Twitter
Share by E-Mail
Author
VickiSilver
Time
5 mins
Type
Multiple Choice
Quiz #
145,895
Updated
Dec 03 21
# Qns
10
Difficulty
Tough
Avg Score
6 / 10
Plays
408
This quiz has 2 formats: you can play it as a or as shown below.
Scroll down to the bottom for the answer key.

Quiz Answer Key and Fun Facts
1. According to the Bible, Isaac was the child of Abraham and Sarah. Which of these is the best translation of the name "Isaac" from the Hebrew?

Apparently Abraham thought that the idea that he and Sarah should have a child in old age was quite amusing. According to Genesis 17:17 (King James Version):

"Then Abraham fell upon his face, and laughed, and said in his heart, Shall a child be born unto him that is an hundred years old? and shall Sarah, that is ninety years old, bear?"

Some sources state that "Isaac" might be better translated as "laughter" or "he will laugh."
2. One of the most famous of all Isaacs was Isaac Newton (1642-1727.) In addition to his great contributions to physics and mathematics, he also held an important government position. What was it?


Answer: Master of the Mint

Newton became Warden of the Royal Mint in 1696 and was promoted to Master in 1699. In this position he was of great benefit to the government of England by aiding it in the prevention of the counterfeiting of coins.
3. One fellow who spelled his first name slightly differently was Izaak Walton (1593-1683.) He wrote one of the most famous books about a popular sport. What was it about?

The first edition of Izaak Walton's "The Compleat Angler, Or the Contemplative Man's Recreation" was published in 1653. The book begins with "A Conference betwixt an Angler, a Falconer, and a Hunter, each Commending his Recreation." Clearly Walton favored the first of these, stating in his book that "God never did make a more calm, quiet, innocent recreation than angling."
4. One of the most popular(and most prolific) writers of the Twentieth Century was Isaac Asimov (1920-1992.) Perhaps best known for writing science fiction, he also wrote hundreds of nonfiction books. Which of these is NOT the title of one of his books?

Asimov also wrote less serious works, such as "The Sensuous Dirty Old Man" and "Lecherous Limericks."
5. Musician and actor Isaac Hayes (born 1938) is a man of many talents. Which of the following is NOT true?


Answer: He has designed his own airplane

The title of the cookbook is "Cooking With Heart and Soul" (Putnam Publishing Group, 2000.) You can also buy barbecue sauce with his face on the bottle.

The royal family of Noyami Mantse in the west African nation of Ghana made Hayes a king under the name Nene Katey Ocansey. In this capacity, he aids economic development in the region.

Hayes also supplies the voice of "Chef" on the animated television series "South Park."
6. Isaac Bashevis Singer (1904-1991) won the Nobel Prize for Literature in 1978. In which language did he write?

Although Singer was fluent in English, and carefully supervised the translation of his works into English, he prefered to write in Yiddish. Among his many novels are "The Family Moskat" and "Enemies: A Love Story."
7. Violinist Isaac Stern (1920-2001) was one of the most highly honored musicians of his time. In 1992 he was awarded the Presidential Medal of Freedom, the highest civilian honor in the United States. He also frequently appeared in films and on television. Which of the following statements is NOT true about this aspect of his career?


Answer: He appeared as a hologram on "Star Trek: The Next Generation"

Jogues arrived in Quebec in 1636 and acted as a missionary to the Hurons. In 1642 he was taken prisoner and tortured by the Iroquois. He was ransomed by the Dutch in 1643 and returned to France. In 1646 he again came to North America as a missionary.

He was killed by an Iriquois later that same year. The Catholic Church recognizes him as one of eight North American Martyrs, all French missionaries who were killed in the New World.
10. Just for fun, let's consider an imaginary Isaac. A famous writer once wrote a spoof of astrology under the assumed name "Isaac Bickerstaff." Who was this writer, really?

Jonathan Swift (1667-1745) played an elaborate April Fool's Day joke on John Partridge, a well-known astrologer of the time. In a pamphlet that appeared in London in February of 1708, "Isaac Bickerstaff" predicted that Partridge would die on March 29. At the end of March, an anonymous pamphlet appeared which claimed that the prediction had come true. By April 1, many people in London believed that Partridge was indeed dead. He was, of course, quite alive.

I suspect that Swift was quite aware of the meaning of the name "Isaac" when he played this prank.
Source: Author VickiSilver

This quiz was reviewed by FunTrivia editor Lanni before going online.
Any errors found in FunTrivia content are routinely corrected through our feedback system.
Most Recent Scores
Jan 20 2023 : Hayes1953: 3/10
Jan 07 2023 : Guest 86: 4/10 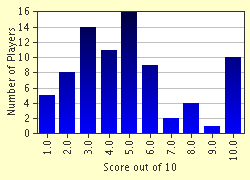 
Other Destinations
Explore Other Quizzes by VickiSilver