It certainly was interesting times when things of all kinds were being invented. In this quiz I'm going to ask some questions about some things that were invented in the last few hundred years. Have fun!

Share on Facebook
Share on Twitter
Share by E-Mail
Author
j-zilch
Time
4 mins
Type
Multiple Choice
Quiz #
332,594
Updated
Dec 03 21
# Qns
10
Difficulty
Average
Avg Score
8 / 10
Plays
710
This quiz has 2 formats: you can play it as a or as shown below.
Scroll down to the bottom for the answer key.

Quiz Answer Key and Fun Facts
1. Who accidentally stumbled on the invention of the microwave oven?

In 1945, Percy Spencer was building magnetrons for radar sets for the company Raytheon. While he was working with them he noticed that the chocolate bar in his pocket had melted. The radar had put off microwaves that melted the chocolate bar. After he realized what he had done he had some interesting times testing the microwave's power.

He found out that if you boxed the waves in, the temperature of whatever was in the box would rise rapidly. He filed for a U.S. patent on October 8 and the microwave oven was tested in a Boston restaurant.

A couple of years later the first ever microwave was built by Raytheon. It was 5' 11" and weighed 750 pounds and was sold for $5,000.
2. Was the invention of the popsicle intentional?

In 1905 Frank Epperson, an 11 year old boy at the time, mixed powdered soda with water and forgetfully left it on his front porch overnight. That night the temperature reached record lows and the drink froze with a spoon in it. The next morning when the boy saw it he had the idea that he could freeze fruit drinks with a stick inside it. Eighteen years later he debuted the idea at an amusement park in Alameda, CA and had great success.

He named it the "Epsicle ice pop" and got a patent for it. Then he renamed it "Popsicle" at the insistence of his children.

In 1925, he sold the rights to the Joe Lowe Company. In 1989, the brand was purchased by Unilever. In 1939 a mascot named Popsicle Pete had interesting times on the radio show "Buck Rogers in the 25th century".

In the 1940s the mascot appeared in television commercials and in newspapers.
3. In early 20th century, America saw the Wright brothers make their first successful flight in an airplane that was powered and had fixed wings that were controllable. In what US state did this take place?

For many years mankind had interesting times attempting to fly from one place to the other. In early Greek myth, Icarus attempted to fly from Crete by attaching wings made of feathers and wax, a design of his father Daedalus. But he made the mistake of flying too close to the sun and the wax melted and he fell to his death.

In the 18th century, the Montgolfier brothers built a hot air balloon and, after testing it with animals, tried flying it with a man inside. Etienne Montgolfier was the first man to lift off of the ground in a balloon.

In the early 20th century the Wright brothers built the first airplane with fixed wings that were controllable and successfully flew in it on December 17, 1903. They named the plane Kitty Hawk after the city in North Carolina in which they first successfully flew.
4. Who had interesting times after someone else claimed to have invented the telephone before he did?

Elisha Gray said that he had invented the telephone before Bell did. The two men went to court and Bell won since his invention was patented first. Alexander Graham Bell is credited with saying the first words on a telephone by telling his assistant to "come here" over the phone.
5. Who invented the modern three-point seat belt for vehicles?

Nils Bohlin was born in 1920 in Härnösand, Sweden. He began work as an aircraft designer for Saab. While he was there he helped design ejection seats. (There had to be some interesting times getting that one right!). In 1958 he joined the safety department for the company Volvo where he invented the three point seat belt in 1959.

He recieved a patent for his seat belt in 1962 and it was first introduced in the Volvo 122. In 2002 he was inducted into the National Inventors Hall of Fame. He died the same year.
6. In 1879, which American decided to shine a little light on the subject with the successful patenting of the carbon-filament light bulb?

In the 1870s Thomas Edison experimented with the creation of an incandescent light bulb. After some interesting times trying with several metal filaments he found one that worked and his first successful try was October 22, 1879. The bulb ran for 40 hours.

In November of the same year he filed for a patent which was granted January 27, 1880. Several months after the patent was granted, Edison and his team discovered a carbonized bamboo filament that would last for 30 times as long. The first public demonstration of this light bulb was December 31, 1879 in Menlo Park. Mahen Theatre in Brno was the first building to use Edison's invention.
7. The vacuum cleaner has seen some interesting times evolving into what it is now. But who was the first person to get a U.S. patent for the invention of the vacuum cleaner?

Daniel Hess from Iowa invented a vacuum cleaner in 1860 which had a rotating brush that cleaned the carpet much similar to the ones we have today. He received a patent for it on July 10, 1860.
8. Erno Rubik is typically credited with inventing the Rubik's cube. In what country did this take place?

A Rubik's Cube is a typical 6 sided cube with a different color on each side. Each side is split into 9 squares. When twisted the cube can be scrambled to where the colors are mixed up. Then you try twisting it in any direction until the colors are back to normal.

The cube is solved when the face of each side is one solid color. In the movie "The Pursuit of Happiness" starring Will Smyth and his son Jaden we see Will Smith's character solving one in not much time. The movie was set in the early 80s when the cube was first introduced to the US.

The Rubik's Cube was originally supposed to help Erno's students understand 3D. He didn't even know he had a puzzle on his hands until he scrambled it and had interesting times trying to restore it. He received a Hungarian patent for it in 1975 and a US patent in 1983.
9. Who is credited with inventing the siphon system used in flush toilets today?

Karl Benz invented the car with a four stroke cycle gasoline engine in 1885. He received a patent for in January 1886. Today cars run on two types of fuel, gasoline and diesel. Gasoline is what was originally used and is the most popular in cars today. Diesel was invented by Rudolf Diesel in 1910 and is made of recycled vegetable oil such as used oil from fast food restaurants.

This quiz was reviewed by FunTrivia editor Snowman before going online.
Any errors found in FunTrivia content are routinely corrected through our feedback system.
Most Recent Scores
Jan 22 2023 : Guest 76: 8/10
Dec 11 2022 : agentofchaos: 7/10 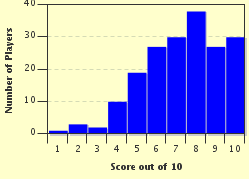 Related Quizzes
This quiz is part of series Commission #13:


Other Destinations
Explore Other Quizzes by j-zilch