This is a quiz about the life and career of Jonathan Larson.

Jonathan Larson was born on February 4, 1960 to Nanette and Al Larson. He also had a sister named Julie.
2. What was the name of Jonathan Larson's high school?

Jonathan Larson studied theatre at Adelphi University, Long Island, New York from 1978 to 1982. He performed in several of the university's four original shows a year.
4. Who was Jonathan Larson's favorite playwright?

Jonathan Larson's idol was Sondheim, who he got to work with in the 1990s. Sondheim, among others, was one of Jonathan's early influences. Jonathan served as an "observer" for Sondheim's "Into the Woods".
5. What was the name of the first play Jonathan tried to have produced?

"Superbia" was Jonathan's first original work. When he finished it in the mid 80s, he tried for a few years to get it produced, but couldn't find anyone willing to do so.
6. What was the name of the monologue Jonathan wrote to express his frustration over his inability to produce his first play?

Jonathan wrote "Tick, Tick... BOOM!" in the late 80s to express his frustration that he was nearly 30 and had not been produced. He performed it several times as a monologue. In 2001, it was officially produced as a play with three stars instead of one.
7. Who was Jonathan's first collaborator on "Rent"?

The concept for "Rent" was actually Bill Aronson's idea. He and Jonathan worked on it together for a short time before Jonathan took over.
8. "Rent" was first performed on the Nederlander Theatre stage.

The Nederlander Theatre served as "Rent"'s home for over twelve years while it was on Broadway. Before that, however, there was a small two week production in the New York Theatre Workshop. It was also performed in the NYTW in the three months before it went on Broadway.
9. When did Jonathan die?

Jonathan Larson died just after midnight on January 25, 1996, the same day "Rent" was supposed to start previews.
10. How did Jonathan die?

Jonathan Larson died from an aortic anuerysm caused by Marfan's syndrome, which no one knew he had until after the autopsy.
Source: Author adampfan1990

This quiz was reviewed by FunTrivia editor bloomsby before going online.
Any errors found in FunTrivia content are routinely corrected through our feedback system.
Most Recent Scores
Jan 25 2023 : emmal2000uk: 1/10
Jan 23 2023 : Guest 72: 9/10 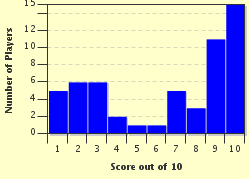 
Other Destinations
Explore Other Quizzes by adampfan1990