Frida Kahlo was a great Mexican painter that lived in the first half of the 20th century. Take this quiz to find out some things about her life!

Quiz Answer Key and Fun Facts
1. She is known as Frida Kahlo, but her birth name was a little longer. What was her full birth name?

Frida Kahlo was born Magdalena Carmen Frieda Kahlo y Calderˇn in July 6, 1907. The name Frieda comes from the German word Friede, which means peace. She dropped the e from her name around 1935, and subsequently became known as Frida.
2. Following a horrible accident in 1925, Frida Kahlo was left with many injuries and much pain, that tormented her throughout her whole life. What long-time effect did her injuries have?


Answer: She had to terminate all her pregnancies.

In September 1925, Frida suffered massive injuries when the bus she was riding in crashed with a car. Among her injuries were a broken spinal column, a broken collarbone and a broken pelvis, as well as injuries in her abdomen and uterus. Frida had many surgeries and for the most part recovered from her injuries, even though she was still in pain from time to time.

Her injuries, however, did not allow her to become a mother, and she had to terminate all three of her pregnancies.
3. Who or what is depicted in most of Frida's paintings?

Frida Kahlo started her painting career after the accident in 1925 forced her to be immobilized for three months. She did mostly self-portraits during that period, and she claimed that happened because she was so often alone and because she was the subject she knew best. By the end of her life, Frida had drawn more than fifty self-portraits.
4. Frida was married to fellow painter Diego Rivera for half her life. Which of the following statements is NOT true about their marriage?

Frida Kahlo and Diego Rivera got married in 1929, even though her mother was against it. Their marriage often had problems, because of their temperamental personalities and their multiple infidelities. Frida had affairs with both men and women, while Diego had an affair with Frida's sister.

The two of them eventually divorced in 1939. They remarried thirteen months later, in December 1940, and stayed married until Frida's death.
5. Frida Kahlo was the first 20th century Mexican artist to have a painting bought by the Louvre.

In 1939, several of Frida's paintings were shown at an exhibition called "Mexique" in Paris. One of the paintings in display, "The Frame", was bought by the Louvre. "The Frame" is a self-portrait of Frida in a blue background.
6. What were Frida's and Diego's opinions on having children?

Diego, who had to travel a lot because he was already a renowned artist, did not want children. On the other hand, Frida wanted a child very much but her injuries didn't allow her to have one. Frida's and Diego's disagreement on the matter of children put further strain on their already troubled marriage.
7. Which prominent communist did Frida have an affair with in 1937?

Frida Kahlo and Diego Rivera were both communists, so when Trotsky sought asylum in Mexico in the late 1930s to avoid the Stalin regime, they were eager to let him and his wife stay with them. Trotsky's prominence and Diego's admiration for him, coupled with Frida's desire to hurt Diego after he had an affair with her sister, led Frida to have an affair with Trotsky.

Their relationship ended after a few months, and Trotsky and his wife moved to a different house. He lived there until his assassination in August 21, 1940. Frida's self-portrait called "Between the Curtains" was a gift to Trotsky.
8. What event marked the beginning of the rapid decline of Frida's health?

Frida's father died in 1941 as a result of heart attack. Even though she was remarried to Diego Rivera and they moved back to the house of her parents (which was known as "La Casa Azul", or "The Blue House"), Frida's health started to deteriorate fast.

In the years to follow she had several operations in her back and leg. In 1950, she had to undergo seven operations because of spinal problems. Her health problems persisted until her premature death a few years later.
9. What was Frida Kahlo's official cause of death?

The official cause for Frida's death was pulmonary embolism, which is an obstruction in the pulmonary artery (artery that carries blood from the heart to the lungs). There was no autopsy, however Frida was very ill prior to her death, suffering from bronchial pneumonia and having her leg amputated at the knee because of gangrene.
10. Frida Kahlo was born in Coyoacßn, Mexico. She also died in the same place.

Coyoacßn is a borough within Mexico City. It was established in 1928 and has a population of over 600,000 people. Frida Kahlo, apart from being born in Coyoacßn, died there in July 13, 1954, a week after her 47th birthday.
Source: Author Gil_Galad 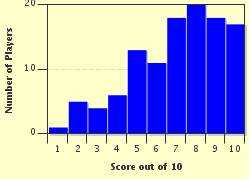 
Other Destinations
Explore Other Quizzes by Gil_Galad