Immanuel Kant, Can He Not? Trivia Quiz

He was a 5 ft tall hypochondriac whose daily routine you could set your watch by. But what else do you know about the brilliant Immanuel Kant?

Share on Facebook
Share on Twitter
Share by E-Mail
Author
doublemm
Time
4 mins
Type
Multiple Choice
Quiz #
362,764
Updated
Dec 03 21
# Qns
10
Difficulty
Average
Avg Score
8 / 10
Plays
257
Awards
Top 35% Quiz
This quiz has 2 formats: you can play it as a or as shown below.
Scroll down to the bottom for the answer key.

Quiz Answer Key and Fun Facts
1. Immanuel Kant was born in 1724 in (what was then) East Prussia. His critical influence on Western thought was to promote the "emancipation of the human consciousness from an immature state of ignorance". Which period, which coincided with the life of Kant, does this statement reflect the sentiments of?


Answer: The Age of Enlightenment

The Age of Enlightenment was one of the most important cultural revolutions in history, and was a time when challenges began to be brought to beliefs that were based on faith and irrationality. Immanuel Kant was undeniably a key figure in this movement and the quote provided in the question section was taken from his 1784 essay "Answering the Question: What is Enlightenment?".
2. Which of the following best describes the early family life of Immanuel Kant?

Kant was the fourth of nine children born to Johann Georg Kant and Anna Regina Reuter. Both of Kant's parents were Pietists - a branch of Lutheranism which followed a literal interpretation of the Bible. This religious movement was relatively short-lived, but it peaked during the life Immanuel Kant, and the strictness of its doctrines were clearly disliked by him.

Despite this dislike, which undeniably shaped many of Kant's views in later life, it did not seem to sour his relationship with his parents, whom he respected. Kant was particularly admiring of his mother, who died in his teenage years. Following her death, Kant began and maintained a life of sexual abstinence.
3. Kant took a keen interest in science after being introduced to the work of Isaac Newton as a student. He is credited with being one of the earliest developers of the Nebular Hypothesis. With which matter is this hypothesis concerned?


Answer: The creation of the solar system

This theory states that bodies such as stars, planets and satellites formed from giant clouds of molecular hydrogen, which clumped together as a product of the fundamental force of gravity. In very massive bodies, hydrogen nuclei underwent fusion to create heavier elements such as carbon, oxygen, and nitrogen (this last point was not postulated by Kant, but is a modern extension of the Nebular Hypothesis).

This theory originally only concerned itself with our own solar system but is thought to be applicable to other solar systems throughout the universe.

This theory was one of Kant's earliest works and was striking in its forward-thinking. This theory contrasted with Newton's theory of a solar system was imposed in its current state by God. Kant also had some slightly less plausible and more eccentric ideas on the solar system.

He predicted that all planets would one day be inhabited, with those furthest from the sun harbouring the most intelligent beings.
4. In 1781, Immanuel Kant published a work which looked at the limits of human knowledge based on reason alone. What is the name of this famous work?

This work, despite being hailed as one of the most important in Western philosophical thought, is difficult, unwelcoming, and was described by Johann Georg Hamann as a "tough nut to crack". One of its main aims was to challenge the view that knowledge which is independent of experience (i.e. a priori knowledge) has to come from analytic truths (i.e. truths where the concept in the predicate is contained in the concept in the subject (e.g. all men are male)).

His main examples were drawn from maths and physics, which he was exposed to by his mentor Martin Knutzen. For example, "5 + 7 = 12". This we can know a priori, but Kant argued that this statement was synthetic rather than analytic, since the concept of the predicate is not contained in the concept of the subject (i.e. you won't find a definition of "12" in any part of "5" or "7"). Similarly, the Newtonian idea that every action has an equal and opposite reaction can be known a priori, but again this is, Kant argued, a synthetic statement.

The importance of these thoughts to Kant was that knowledge should not be restricted to analytic truths and that important truths can be known without experience. This should not be confused with faith and irrational belief, which Kant criticised.
5. Immanuel Kant drew a distinction between the way objects were in themselves (which he termed the "noumenal world") and the way in which we interpret these objects via our senses. What term did Kant use for this latter category?

Immanuel Kant is seen by many to have synthesized Empiricism and Rationalism, which had stood in opposition for long before he was born. The Rationalists believed that all knowledge derived from the mind, while the Empiricists believed that all knowledge was based on sensory experience. Kant viewed these notions as extreme and sought to come to a middle-ground theory which combined what he saw as the best of both worlds.

He admired the scientific approach taken by David Hume (an Empiricist), but could not agree with him that knowledge could not be gained from things which could not be experienced by our senses.

This extreme scepticism by Hume ruled out knowledge of causality (i.e. your experience tells you that one thing always follows another, but, according to Hume's extreme scepticism, it cannot be known that the first thing causes the second). Kant suggested that our minds possess basic "categories" which allow us to make sense of the things we experience. Kant proposed that there were two worlds - the noumenal and the phenomenal.

The noumenal world represents how objects are in themselves, whilst the phenomenal world is how we interpret these objects using our senses. One startling conclusion from this (if it is to be believed) is that we can never directly experience the real (noumenal) world.
6. Immanuel Kant held that concepts such as time, space, and causality were simply creations of our minds.

Kant believed that our minds were limited in how accurately they could interpret the true forms of objects that were external to the self. He put forward the view that the mind created devices/categories to allow us to interpret such external objects and events.

For example, he suggested that the concept of time did not exist in the external world, but instead was created in our minds so that we could place events in a convenient order to give them meaning.
7. Immanuel Kant concerned himself with the issue of morality as well as reality. What name is given to Kant's concept on moral philosophy?

The issue of what is "right" has engaged many of the greatest philosophical minds over the years. Some thought the Bible was the ultimate authority on what was right, whilst others thought that it was whatever made you feel good. Whilst both of these theories may sound appealing to some, they can soon be picked apart, especially when considering some of the more controversial doctrines of the Bible, or how selfish decisions can impact negatively on others. Kant tackled the issue of morality with a scientific approach and sought to rationalise morality using a set of overarching rules.

His Categorical Imperative can be summarised as two points. Firstly, actions can only be moral if they can apply universally (i.e. something that you do can only be moral if you accept that it is also okay for everyone else to do it too). Secondly, people should not be treated as a means to an end, but rather as an end in themselves.

This line of thought was laid out by Kant in his "Critique of Practical Reason".

This view of morality has been criticised by many, however, as it does not take into account the context in which these events occur. For example, it may be judged by Kant that lying is morally wrong, and so should never be done. But is lying still morally wrong when it spares someone's feelings or even saves someone's life?
8. After producing works on the subjects of reality and morality, Kant aimed to complete the trilogy with his "Critique on Judgement". Which of the following was a major theme of this work?

Kant's "Critique on Judgement" looks at how we judge things, with particular focus on aesthetics. He says that art gives us aesthetic joy by allowing "free play" of our imagination. Observing art for Kant, therefore, is a very active and intellectually stimulating project.

He again touches upon the ideas of the limits of human understanding (which he discusses at length in his "Critique of Pure Reason") by contrasting "the beautiful" with the "sublime", with the latter having genuine beauty, but which is less obvious to us.
9. Kant was well-travelled and delivered various lectures on his revolutionary ideas all over Europe.

Kant was one of the first major philosophers who was also an academic, and he is said to have never travelled further than 10 miles from Konigsberg (now Kaliningrad, Russian Federation). Kant studied (largely) under Martin Knutzen at the University of Konigsberg (known as the Albertina). He then for a time became a private tutor for several students in towns surrounding Konigsberg, before returning to the university to become a lecturer in 1755, where he would remain for the rest of his career.

Kant was a curious creature of habit. His days were almost monotonous in their routine - rise, drink coffee, write, lecture, walk, etc. As an outsider looking in, Kant may appear as a miserable hermit, but by all accounts he was a rather cheerful fellow. It is true, however, that he shunned social interaction. He saw no time for friends, but seemed quite content with this existence. He saw no use for himself in music or literature either, believing that they distracted the mind rather than enhancing it. The cheerfulness of Kant seemed to wane in his later years, and it is said that his one and only remaining pleasure in these years was bird-watching.
10. The works of Immanuel Kant have inspired some to call it a revolution in western philosophy, and specifically to compare it to a famous scientific revolution. Which revolution is this?

By synthesizing Empiricism and Rationalism, as well as providing insight on aesthetics and logical (yet controversial) work on morality, Immanuel Kant's philosophical output was certainly impressive. Many have compared the change in philosophical thought as a result of Kant's work as a Copernican Revolution.

However, Kant himself saw his work is inciting a "Copernican Revolution in reverse". By this he meant that while Copernicus' Heliocentric Theory showed people that their minds have to conform to the objects of the external world, this was precisely the opposite of what he thought - he believed that what we observe in the phenomenal world *was* created by our minds as an interpretation of the noumenal world.
Source: Author doublemm

This quiz was reviewed by FunTrivia editor bloomsby before going online.
Any errors found in FunTrivia content are routinely corrected through our feedback system.
Most Recent Scores
Dec 15 2022 : H53: 7/10
Dec 14 2022 : Guest 194: 1/10 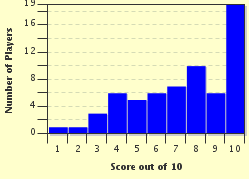