This is a quiz on the full life of Helen Keller. Miss Keller was a deaf-blind woman who taught the world to respect all blind people. Hope you have fun:)

Miss Keller was born in a small, two-room house next to her main house. She only moved out of this house after her illness.
2. Helen became deaf-blind as a result of an injury suffered in an auto accident.

Nobody knows for sure what caused Helen Keller's deaf-blindedness, but many suspect it was scarlet fever. It most certainly was not related to any auto accident.
3. What were the names of Helen Keller's two autobiographies?


Answer: 'Midstream' and 'The Story of My Life'

Helen began college in 1900 and finished in 1904. By getting a college education she proved the capabilities of the deaf, blind, and deaf-blind.
5. For two years, Helen raised money for what organization?


Answer: The American Foundation for the Blind

At first, Helen resented the idea because she was being asked to beg for support for The American Foundation for the Blind, but she gave in and for two seasons collected money for the organization.
6. Did Helen Keller ever get engaged to marry?

Keller was briefly engaged to Peter Fagan a journalist who worked as her secretary. After Helen's engagement, many people started discovering that Helen had a marriage licence, so Helen denied it because of her desire for a private life. The engagement came to an end after Helen's parents demanded that he leave his position and leave their house.
7. What was the middle name of Helen Keller?

She was originally going to be named Helen Everett, but at her christening, her father told the minister her name was to be Helen Adams Keller.
8. What is the name of Helen Keller's sister?

Helen and Mildred, Helen's younger sister, were very close, especially after their mother died. As a toddler, Helen became very jealous that Mildred was getting more attention from her mother (before Helen learned to sign) so she hurt her baby sister.
9. When Helen was making speeches, she spoke out loud to the audience.

Though Helen could indeed speak out loud, only close friends and relatives could clearly understand her, so she spoke with an interpreter. Speaking out loud was a way of proving the cababilities of handicapped people. She spoke publicly for about the last fifty years of her life.
10. What was the date of Helen Keller's death?

Helen died only 26 days from her 88th birthday in her home at Arcan Ridge.
Source: Author treebeard776 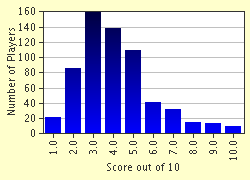 
Other Destinations
Explore Other Quizzes by treebeard776