This is a fairly easy quiz about the life of Helen Keller. Another person I find fascinating and inspirational.

Quiz Answer Key and Fun Facts
1. What was the name of Helen's teacher?

Born Johanna Mansfield Sullivan she also had problems with vision and was a graduate of Perkins Institute for the Blind. It was Perkins Institute that recommended her to teach Helen. Helen always referred to her as 'Teacher'.
2. In what year was Helen born?

At 19 months of age, Helen contracted a disease that produced a high fever and left as mysteriously and suddenly as it had come. Helen had always said her doctor called it acute congestion of the stomach and brain. In those days congestion or flux could mean anything. There never was an exact diagnosis. Medicine was still fairly primitive by today's standards.
4. How old were Helen and her teacher when they met?

Arriving at Helen's home in Tuscumbia on March 3, 1887, Annie had already seen her share of hard times. She and her brother were orphans and she watched him die a slow death at a young age. She had more than one eye surgery to help her own vision problems. Annie and Helen were seldom apart until Annie's death on October 20, 1936.

They had almost become one person. In the words of one of Helen's biographers, 'It is impossible to write a book about Helen Keller that is not also a book about Annie Sullivan.'
5. What was Helen's 'break through' word?

After weeks and months of Annie trying to get through to Helen, Mr. and Mrs. Keller set a deadline for Annie's way of teaching to stop. It was near the end of this time period, when Annie was trying to teach Helen table manners, and she dragged Helen outside to the water pump, to fill up the jug Helen had spilled.

It was at that moment, Helen finally made the connection, that all things had a name and the 'spelling' Annie had been doing on and with her hands, were the names of things. Nothing would ever be the same for both Helen and Annie from that point forward.
6. What famous inventor was Helen good friends with?

Bell may be famous for inventing the telephone, but his life's work was with and for the deaf. Dr. Bell however, was the one who recommended Captain Keller go to the Perkins Institute for the Blind, to see if there was anyone there that could help Helen. That person of course, turned out to be Annie Sullivan. It was because of this, that Bell and Helen became life long friends.
7. What year and college did Helen graduate from?

Although Annie was always by Helen's side, most thought it wasn't fair for Annie to read any exams to her. Therefore, they were translated into braille so Helen could 'read' the exam and answer the questions alone. The fact she was blind and deaf made studying hard and tedious, but she graduated in four years, with honors, along with her classmates from her freshman year. To me, it is proof positive, that if anyone wants to do anything badly enough, they can and will find a way!
8. Who invented braille?

Born in 1809, Braille was blind from the age of three. With the drive and desperation to be able to 'read' he eventually came up with the braille alphabet. The idea came from the French Army's code of dots and dashes, raised up off the paper so they could be read in the dark.
9. Who married?

Annie married a man named John Albert Macy on May 2, 1905, but the marriage would not last. The final and permanent break-up was in 1934. There were many reasons, but the biggest contention was, Macy was living off of Helen's money.
10. How old was Helen when she died?

After a series of small strokes, Helen retired from public life in 1961 and died on June 1, 1968. In her life she traveled the world, was a public speaker and a published author. Quite the accomplishments for anyone. Helen Keller showed the world, no matter the obstacle, you can go around it, over it, under it, or right through it. I think she did all four. What an amazing woman!
Source: Author BrainyBlonde 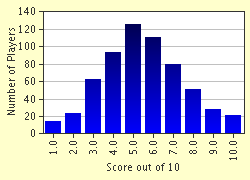 
Other Destinations
Explore Other Quizzes by BrainyBlonde