Quiz Answer Key and Fun Facts
1. Carl Panzram was a truly bad man. He confessed to having murdered 22 men and boys. One of his less serious crimes was breaking into the home of former President William Howard Taft. He stole a pistol from Taft which he later used in some of his murders. Panzram was executed September 5, 1930 at Leavenworth Penitentiary. When the hangman asked if he had any last words what did Panzram have to say?


Answer: "Hurry up you Hoosier b*stard. I could kill ten men while you're fooling around."

I find no evidence that the executioner was actually from Indiana. Historically "Hoosier" was sometimes used as an insult along the lines of "hick" or "clodhopper". I felt the need to defend executioners from my native state.
2. "The Killer Clown", John Wayne Gacy, was convicted of raping and murdering 33 young men then burying most of their bodies under the crawlspace of his house. Before the state of Illinois executed him by lethal injection, Gacy's last words were what?

Gacy appeared at public events and children's parties as "Pogo the Clown" when not busy with his murderous hobby.
3. Robert Erskine Childers was an Englishman who sided and fought with the Irish nationalists. He opposed the treaty ending the Irish War of Independence and chose the wrong side in the ensuing Irish Civil War. Convicted by a military court of illegally possessing a pistol, he was executed in Dublin in 1922. What helpful last words did he have?

Before his execution Childers shook hands with the members of his firing squad and offered advice. To help reconcile the feuding Republican factions, he also made his son (a future president of the Irish Republic) promise to shake hands with the men who had signed his death warrant.
4. It may well be that Tom "Black Jack" Ketchum never killed anyone. There's no question, though, that he was an accomplished train robber. Ketchum was also the only person to be executed for violating New Mexico Territory's law against "felonious assault upon a railway train". The law was found to be unconstitutional too late to do Black Jack any good. Ketchum's last words were:


Answer: "Goodbye. Bury my grave deep. All right, hurry up."

Ketchum is more famous for his horribly botched execution than for his last words. The hangman's rope had apparently stretched when it was tested and Black Jack had gained weight during his imprisonment. The result was that, when he dropped, Ketchum was decapitated. His head was sewn back in place before burial.
5. Henry (Billy the Kid) McCarty, also known as William H. Bonney died at the tender age of 21 in Ft. Sumner, New Mexico. During and after the Lincoln County War, Billy killed between 10 and 21 men. Sheriff Pat Garrett hunted the Kid down and shot him in July of 1881. According to the only witness (Garrett) what were Billy the Kid's last words?

Based on a famous photograph of Billy, he was long known as "The Left Handed Gun". That was the name of an excellent, if historically challenged 1958 movie starring Paul Newman. Recent examination of the photo shows that the negative was reversed and Billy the Kid was actually a right handed gunslinger.
6. James Allen Red Dog was proud of his cowboy boots. He even took them off so that the man whose throat he had just cut wouldn't bleed on them. Convicted and sentenced to death by the state of Delaware, the full-blooded Lakota Sioux chose to forego appeals. Red Dog died by lethal injection March 3, 1993 after speaking these last words.

Jim Red Dog, already a confessed murderer, was relocated to Delaware from Montana under the Federal Witness Protection Program after assisting the investigation of the militant American Indian Movement. Probably not the wisest choice officials could have made.
7. François-Marie Arouet de Voltaire, famous French writer and philosopher died at home, not at the hands of the state, at the ripe old age of 84. His last words were:


Answer: "Now, now, my good man, this is no time for making enemies."

The priest at his bedside asked Voltaire if he wanted to renounce Satan. The old Deist apparently couldn't resist one last jab at the Church.
8. In September, 1692 with his wife lanquishing in Salem's jail accused of witchcraft, farmer Giles Corey spoke against the girls who had accused her. To no one's surprise the girls suddenly recalled that Corey himself was a witch and accused him as well. The 80 year old Corey not only refused to confess but he would not answer the question "Will you be tried by your God and your country?" Corey could not be tried unless he answered but unfortunately the penalty for his silence was "peine forte et dure" - being pressed to death under the weight of heavy stones piled onto his body. As each stone was laid onto him Corey was asked if he would submit to trial. Corey's answer was the same every time. What was it?

Had he stood trial, Corey would have been convicted and hanged like the nineteen "witches" who walked to Salem's Gallows Hill (including Corey's wife). The usual reason for choosing, in effect, to be tortured to death instead of pleading, was to die unconvicted so that one heirs could inherit.
9. Tallulah Bankhead was a motion picture star, frequent talk show guest, and lover of the high life. She was one of the most quotable stars of her era and once said she only threw two tantrums a year, but each one lasted six months. On her deathbed in 1968, Bankhead's last words were what?

Alabama-born Tallulah Bankhead believed in literally living the high life. She once said, "Cocaine isn't habit forming. I should know--I've been using it for years".
10. James French was serving a life sentence in Oklahoma but couldn't stand the thought of living out his life in prison. Lacking the courage to commit suicide, French decided to murder his cellmate hoping that would force the state to execute him. His plan worked and in 1966 French took a seat in Oklahoma's electric chair. Before the switch was thrown, what wisdom did James French share with his executioners?

In 1972 a United States Supreme Court ruling, Furman v. Georgia, led to a a cessation of capital punishment while laws were rewritten to meet the court's standards. James French was the last convict executed in the electric chair until Florida took the life of John Spenkelink in 1979.
Source: Author wilbill 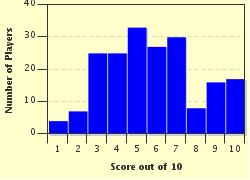 
Other Destinations
Explore Other Quizzes by wilbill