From a challenge issued in the Author's Lounge, here are ten people throughout history who died from eating or drinking related causes. Were they greedy - or were they needy? Good luck!

Quiz Answer Key and Fun Facts
1. In 206 BC, the Greek philosopher Chrysippus was having a feast of wine and figs when, becoming very full and intoxicated, he decided to give his donkey a treat of the two products as well. This brought about the early death of Chrysippus. How?


Answer: He laughed so much that he died

Chrysippus lived from 279 to 206 BC. He was one of the Ancient Greece stoic philosophers. His specialities included logic, physics and ethics. He was a renowned hard worker, and during his lifetime, he wrote more than 700 works on various subjects. There are two versions to how he died.

The first is that he drank himself to death. The second, and more popular one, is the donkey story. After consuming too much wine and eating too many figs, Chrysippus ordered a bucket full of wine to be given to the donkey.

Then, when the donkey became somewhat the worse for wear, Chrysippus ordered it to be given some figs to eat. The result was so comical when the poor intoxicated donkey tried to chew the figs that Chrysippus laughed so hard, he dropped dead.

The moral of this story: Never allow an ass to make a donkey out of you.
2. The death was recorded in 270 BC of one Philitas of Cos, who was reported to have died in which scholarly manner?


Answer: So absorbed in studying that he forgot to eat, and starved

Philitas of Cos was a dedicated scholar and poet in Ancient Greece, and lived from 340 to 285 BC. He was always slightly built and thin at the best of times and grew progressively even more so as he grew older. Aelian, a Roman author of the times, wrote, with tongue very firmly planted in cheek, that poor old "Philitas was so thin that he put lead weights in the soles of his shoes to avoid being blown away by a stiff wind". Greek author Athenaeus of Naucratis wrote of the little scholar's death, that Philitas studied the use of words and puzzles so intensely he forgot to eat, and consequently starved to death. Philitas was definitely needy. Moral of this story: Remember to eat when you're playing the Crystal Ball and Word Wizard.
3. Roman senator Lucius Fabius Cilo was excessively fond of milk, but this fondness was the cause of his death in the year 212. How?


Answer: Choked to death by a hair in his glass of milk

Over the course of his career, Lucius (born 150 AD) was a general in the Roman army, a military Prefect, Pro-Consul of a Roman province, and a tutor of some renown. To think this illustrious career came to such a sour end by one tiny hair floating in a glass of milk that was consumed too quickly. Still, it could have been worse.

His death could have been caused by a rampaging rabbit rather than a "hair".
4. One Gyorgy Dozsa of Hungary was executed in 1514 in which singularly cruel way?

Gyorgy Dozsa had led a peasants' revolt in Hungary. He and his fellow rebels were defeated of course, and Gyorgy, along with nine others, were thrown in prison until their manner of execution was decided upon. For his temerity in attempting to overthrow the rulers of Hungary, Gyorgy was tied to an iron throne, an iron crown was put on his head, and an iron sceptre forced into his hand.

A fire was then lit underneath the throne, making the iron by which he was surrounded red hot. He slowly began to roast.

His fellow rebels, who had been starved for a week, were then ordered to start eating him - while he was still alive! Those who refused were murdered. Those who obeyed were eventually allowed to go free. It was the 'heyday' of cruel and unusual punishments. Aren't you glad you live in the 21st century?
5. In 1601, the Danish astronomer, Tycho Brahe died from a food-related cause whilst at a banquet, when he refused to leave the table. What happened?


Answer: His bladder became overfull and his kidneys failed

Tycho Brahe, who was born in 1546, was a Danish nobleman who developed a deep interest in, and wide knowledge of, astronomy. Far from being murdered for daring to go against the Christian teachings of the time regarding the formation of the world, Tycho was granted an estate and the funds to build a research institute by Denmark's rulers. From there he was invited to move to Prague to become the Holy Roman Empire's official astronomer. How amazing was that? Although great minds of the past had also studied the changing skies above them, no one before him had attempted such detailed and ongoing observations of the planets - and all was done by the naked eye. Telescopes had yet to appear on the scene.

In 1601, while attending a banquet in Prague, Tycho, out of politeness, refused to leave the table to go to the toilet when this became more than necessary. When he returned to his home after the feast that evening, he could no longer pass urine, except for a few small drops. He was in excruciating agony, and died eleven days later from kidney failure. It seems that this great Danish astronomer, like Hamlet, just didn't know whether to pee or not to pee.
6. Now here's an interesting death related to over consumption of a product: British lighthouse keeper, Henry Hall, died in 1755 while trying to put out a fire in his lighthouse. How did this death happen?


Answer: He looked up and burning lead poured into his mouth

What an amazing man he was! When he died in that year, he was an incredible 94 years old. Hall worked on the famous Eddystone Lighthouse which was located off the coast of Devon. He was born into a family that produced a long line of lighthouse keepers from the mid 1700s until 1913, and his family then married into the famous lighthouse keeping families of the Knott and Darling families.

The lighthouse caught fire on December 3rd, 1755, when a spark from a lamp set the roof alight. Hall and his two offsiders tried to douse the flames but were unable to and the lighthouse subsequently burned down to rock level. Poor Henry looked up at the tower from below when it was burning, just as the melted lead from the lighthouse's reflector poured down - straight into his mouth and down into his stomach. He died eight days later from his injuries, with the doctor's report stating that "the left side of his body, below the short ribs, in the breast, mouth and throat...left side of the head and face, with the eye extremely burnt". When an autopsy was later carried out on Henry Hall's body, a large chunk of now re-solidified lead was taken out of his ulcerated stomach. This piece of lead can be seen today in Scotland's National Museum. Poor gallant old Henry was well and truly plumbed.
7. The American industrialist Eben Byers died in 1932 after drinking huge amounts of which supposedly curative product?

Born in 1880, Byers was a rich, champion athletic, Yale educated, hard-working and a bit of a 'ladies' man' from all accounts. In 1927, he was returning from a sports event, and damaged his arm when he fell out of his train berth on the journey home. The pain from this injury didn't fade and became so severe that his doctor suggested it could be healed if Byers tried the latest in patent medicines. That was a huge mistake, as time would reveal. The medicine was known as Radithor. It was made by one William Bailey, who, though he claimed to be a qualified doctor who had graduated from Harvard, was actually a university dropout.

By the time it was suggested to Byers that he to try this medicine, Bailey was extremely wealthy from the sales of his dubious medicine. This is terrible: Bailey manufactured his miracle cure by mixing high doses of radium in water! He built up his empire by offering doctors a healthy reduction in its rebate each time they prescribed it. Byers began taking enormous doses of this product after it was recommended by his doctor - and drank over 1,400 bottles in just over two years. The amount he consumed was later described as "three times the acute lethal radiation dose". As a result, he lost "most of his jaw ... his brain was abscessed and holes began forming in his skull". When he died of radiation poisoning in 1932, he had to be buried in a lead coffin. Bailey was never charged and set up another booming business selling radioactive belts and paperweights.
8. The writer, Sherwood Anderson, died in 1941 when he swallowed something unusual. What was it?

Anderson, who was born in 1876, was a writer of some considerable merit. He wrote novels, short stories, poetry, drama and non-fiction. His most famous work perhaps is his 1919 short story cycle "Winesburg, Ohio". Like Agatha Christie who disappeared once for eleven days, Anderson also once had a type of mental breakdown and disappeared for four days.

Sherwood Anderson died when he was sixty-four, from accidentally swallowing a toothpick that was attached to a martini olive. This brought on the attack of peritonitis that killed him when it perforated his colon. How appropriate is that for a writer - death by colon.
9. Basil Brown was a 48 year old health food guru. He died in 1974 when he drank himself to death with which product?

Carrot juice is described as anti-inflammatory, anti-cancerous, anti-aging and anti-oxidant. It is also said to improve vision, the immune system, bones, teeth and the thyroid gland, as well as being good for your hair, nails, skin, constipation and exhaustion. You've only got to look at Bugs Bunny to see living proof of how good carrot juice was for him - especially his teeth. In short, carrot juice appears to be good for just about everything, except for rocket fuel and for Basil Brown. The silly dill drank ten gallons of it in ten days. Hang on a moment, the phone is ringing:

It would have been so much more appropriate if the 22 year old Franco Brun had died attempting to swallow the Guinness Book of Records. After all, he had a considerable one of his own. Perhaps he thought that swallowing a bible would improve his chances with his Maker.

The peculiar thing with his choice to do away with himself however, is that Franco was only serving a fifteen day sentence at the time. The coroner at the inquest into the manner of poor Franco's death put his fingers together in a studied pose, assumed a thoughtful and deeply intelligent look as best he could, and remarked in a pontificating sort of fashion that "the swallowing of the bible to him (Franco) was some sort of symbolism or allegory, as though he was trying to purge himself of the devil by consuming religion". Oh what hogwash. Everyone knows that the poor boy was just reading about the Israelites wandering in the desert for forty years - and, as a result, got a yen for some sandwiches.
Source: Author Creedy 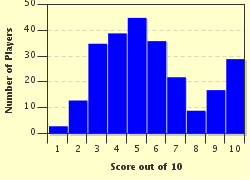 Related Quizzes
This quiz is part of series A Bit of Everything:

Ten different quizzes on various subjects. Just because I like them


1. The Loves of the Early American Presidents Easier
2. Shy, Not Retiring Easier
3. Who Painted This Work? Easier
4. And They Lived Happily Ever After Average
5. Sounds We Make Average
6. Mister Greedy Average
7. Ten Leading Women of the World Very Easy
8. Bit of This and That No 5 Tough
9. The Madness of Monarchs Easier
10. Famous Statues and Sculptures Average