The Lives of Brians Trivia Quiz

The 'Life of Brian' is a comedy film by legendary British comedy group, Monty Python. It shouldn't be confused with the 'Lives of Brians', this quiz about a group of people named Brian.

Quiz Answer Key and Fun Facts
1. Brian Epstein rose to fame in the 1960s as the manager of which chart-topping British band?

In November 1961, Brian Epstein visited the Cavern Club in Liverpool to see a performance by an up and coming local band; just a couple of months later he signed up to be their manager and went on to lead them to international success. The band in question was of course the Beatles.

The Beatles went on to record numerous number one singles in countries all around the world, including the US (where they had led the 'British Invasion' in 1964), and star in five films including 'A Hard Day's Night' (1964) and 'Help' (1965).

Epstein's success was however short-lived. He died of a drug overdose in 1967, at the age of 32.
2. Brian Cowen, the former politician and leader of the Fianna Fáil party, held what position from May 2008 to March 2011?

According to the Constitution of Ireland, the Taoiseach is the head of government or prime minister. The position is usually held by the leader of the party that holds the most seats in the Dáil Éireann (the lower house of the Irish parliament) and is officially appointed by the President.

Brian Cowen took on the role of Taoiseach following the resignation of Bertie Ahern in 2008. He went on to preside over a series of financial disasters in Ireland, including the near collapse of the Anglo-Irish Bank, severe cuts in public spending, and a bail-out from the European Union and the International Monetary Fund. Following several votes of no confidence in his government he was forced to resign in 2011 and retired from politics.

Cowen also held the position of Tánaiste (deputy prime minister) from June 2007 to May 2008.
3. In April 2004 the West Indian cricketer, Brian Lara, broke the world record for the highest number of runs scored in an international test match with his result of 400 not out. Against which nation was this result scored?

This record-breaking match, held in Antigua, was the fourth test between the West Indies and England during the 2003/04 cricket season. However, despite Lara's amazing run scoring, the match ended in a draw. England had also already won the first three tests to win the series and retain the Wisden Trophy (which is awarded to the winners of international test cricket series between England and the West Indies).

Brian Lara also broke the record for the most runs scored in a domestic first-class cricket match in 1994. He scored 501 not out for Warwickshire against Durham, in a match that also went on to end in a draw.

The incorrect options are all famous cricketing nations but they didn't have the misfortune to come up against Brian Lara on that day in history.
4. Brian Mulroney led his nation for nearly nine years, but resigned shortly before his party suffered a record defeat in elections held in 1993. Which nation was this?

(Martin) Brian Mulroney was the 18th Prime Minister of Canada, holding the office from 1984 to 1993. He took over the leadership of the Progressive Conservative Party of Canada in 1983 and led them to a convincing election victory the following year. His first term of office was notable for the signing of a free trade agreement with the United States, attempts to resolve the status of the Canadian constitution (which Quebec had previously refused to sign) and an embarrassing number of scandals.

His second term was even less successful due to the worldwide economic crisis and his growing personal unpopularity. In 1993 he handed over both the leadership of the party and his position as Prime Minister to Kim Campbell, who thus became the first Canadian woman to hold the office. However, Mulroney's legacy to Campbell was a shocking defeat in the 1993 election when the party managed to win only two seats in parliament and Campbell herself was unseated.
5. Renowned Irish playwright and theatre director, Brian Friel, won a Tony Award in 1992 for which play that was later turned into a film starring Meryl Streep?

'Dancing at Lughnasa' follows the lives of five unmarried sisters living in County Donegal, Ireland during the 1930s. It depicts how changes in society and the economy are about to disrupt their cosy, simple life forever. The name 'Lughnasa' is taken from the Celtic harvest festival of Lughnasadh (or Lughnasa). The play is one of Friel's most successful works, winning three Tony Awards in 1992, including the award for Best Play, out of a total of eight nominations. The 1998 film adaptation starred Meryl Streep as Kate Mundy, the eldest of the five sisters, and Sir Michael Gambon as their brother, a priest named Father Jack.

Friel is also known for his plays 'Philadelphia, Here I Come!', 'Translations' and 'The Freedom of the City' (about the political situation of Northern Ireland in the 1970s).

Brian De Palma was born in Newark, New Jersey in 1940 and grew up in the north-east US. He originally pursued a career in physics, studying that subject at Columbia University. However, he quickly switched to the film industry and has since directed films in every decade from the 1960s to the 2010s. 'Carrie', based on Stephen King's debut novel, was probably his first big box-office success, but later film 'Mission: Impossible' probably rates as his most famous work.

Brian Helgeland directed the 2001 film 'A Knight's Tale' and is also a noted screenwriter, with credits including 'LA Confidential' and 'Mystic River'. Brian Henson (the son of The Muppets creator, Jim Henson) directed 'The Muppet Christmas Carol' and 'Muppet Treasure Island'. Brian Levant directed the films 'Beethoven' and 'The Flintstones'.
7. Professor Brian Cox, an English physicist and television presenter, originally had another (somewhat unlikely) career as a member of which 1990s pop band?

D:Ream had a number of UK Top 40 singles in the 1990s, including 'Things Can Only Get Better' that went to number one in 1994. The song became the unofficial anthem of the UK General Election in 1997 when it was used by Tony Blair's Labour Party as their campaign theme. Labour went on to win the election by a landslide, with Tony Blair becoming the first UK Labour Prime Minister for 18 years.

When D:Ream split in 1997, band-member Brian Cox went on to forge a high profile career as a scientist and television personality. His scientific work includes projects undertaken at the Large Hadron Collider (LHC) at CERN in Switzerland (of Dan Brown's 'The Da Vinci Code' fame). His television career has included presenting a wide range of scientific programmes about physics, the universe and even 'The Science of Doctor Who' - a programme broadcast to commemorate the 50th anniversary of the popular BBC time-travelling science fiction show.
8. An English actor named Brian had a starring role in the 1960s British TV series 'Z-Cars', played numerous Shakespearean characters on stage and film, and provided the voice of Clayton in the Disney animation 'Tarzan'. He is particularly known for his extrovert personality and booming voice, but what is his surname?

Brian Blessed (born in Yorkshire, England in 1936) is a noted British TV, film and stage actor. He first came to prominence in the 1960s series 'Z-Cars' but followed that up with numerous minor roles in some of British TV's most iconic shows such as 'The Avengers', 'I Claudius' and 'Doctor Who'. His film credits also include roles in 'Robin Hood: Prince of Thieves' (1991) and 'Star Wars Episode 1: The Phantom Menace' (1999). On stage he has performed in musicals such as 'Chitty Chitty Bang Bang' and Andrew Lloyd Webber's 'Cats'.

Away from acting, he is known for having climbed both Mount Aconcagua and Mount Kilimanjaro (the highest mountains in South America and Africa respectively) and for his three failed attempts to scale Mount Everest - although he did get to about 28,000ft, which is pretty high up! He also broke the record for the oldest man to reach the North Pole on foot in 2005, at the age of 69.
9. The name Brian Warner probably doesn't immediately jump out as that of a celebrity or famous person. That's because it is the real name of which rock and heavy metal singer who shares his assumed name with the band he founded?

Marilyn Manson formed a rock/metal band with Daisy Berkowitz in 1989. It was originally called Marilyn Manson and the Spooky Kids but this was soon shortened to just Marilyn Manson. Daisy Berkowitz is also a stage name, his real name being Scott Putesky. However, Marilyn Manson himself has been the only consistent member of the band since then with lots of other members coming and going. Originally, band members took stage names based on a combination of the names of female movie stars and serial killers - hence the name Marilyn Manson, which came from Marilyn Monroe and Charles Manson.

Dame Edna Everage and Lily Savage are characters created by Australian comedian Barry Humphries and English actor and TV presenter Paul O'Grady respectively. In no way would either be described as a rock or heavy metal performer!
10. In 1970 guitarist Brian May joined forces with Freddie Mercury and Roger Taylor (and later John Deacon) to form a highly successful band that were responsible for hits such as 'Another One Bites the Dust', 'Crazy Little Thing Called Love' and 'Bohemian Rhapsody'. What was the name of the band?

Queen is one of the most successful bands in British music history. 'Bohemian Rhapsody' secured their first number one on the UK Singles chart in 1973. They went on to achieve a further 16 UK top ten hits before the death of lead singer Freddie Mercury, from AIDS, in 1991. Queen's impressive discography of singles were brought together to form the basis of the musical 'We Will Rock You' in 2002. The original London production of 'We Will Rock You' remained in the West End for twelve years and often featured special guest appearances by Brian May and Roger Taylor.

One of the most iconic moments of May's career was his rendition of the British national anthem, 'God Save the Queen', from the rooftop of Buckingham Palace. The event was part of Queen Elizabeth II's Golden Jubilee celebrations in 2002.

The Rolling Stones, Pink Floyd and Led Zeppelin were all active during the 1970s. The Rolling Stones also had a guitarist named Brian in their original line up - sadly however Brian Jones died in 1969 shortly after being asked to leave the band.
Source: Author Fifiona81 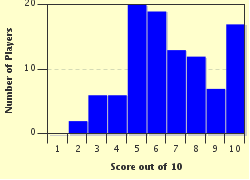 Related Quizzes
1. Famous Amys Easier
2. Famous People Named Bob (General Edition) Very Easy
3. In the Name of the Arts .... and Arthurs Average
4. A Bundle of "Bob" Very Easy
5. Half an Arthur Easier
6. Smart Alecs and Alexes Easier
7. Am I Ann, Anne or Annie? Easier
8. Was Alexander Great? Very Easy
9. Are they named Arthur or Art Very Easy
10. Alfred and Alfredo Look for a Surname Very Easy
11. Anne Who? Average
12. Who am I? Benjamin, Ben or Benny Very Easy