One of the more interesting (and more reviled!) of the British Royal Families. Test your knowledge of their dynasty here.

Quiz Answer Key and Fun Facts
1. Which of these was not a Stuart monarch in England?

Mary I, daughter of Henry VIII and Catherine of Aragon, ruled briefly before passing the throne on to her half-sister, Elizabeth. Many prominent Catholics could not understand why Mary, an ardent Catholic who was later demonised for her persecution of protestants, would pass the throne to a known Protestant whom she openly called a bastard-child because she considered Henry's marriage with Elizabeth's mother to be invalid. More confusingly, she did this on the advice of her husband, His Most Catholic Majesty Philip of Spain. Philip wanted to ensure that there was no chance that Mary, Queen of Scots (the next in line) would take the crown- she was at the time married to the French Dauphin and Spain was struggling for European hegemony with the French.

Mary II was the daughter of exiled James II. Charles II was invited back to England by popular demand after he had fled into exile following the regicide of his father. James II was the last Catholic King of England, driven into French exile by his daughter's husband, William of Orange, and his English Whig allies.
2. When did the first Stuart king assume the throne of England?

In 1603 James VI, King of Scotland, was chosen by Elizabeth I to be her heir. This marked the end of the Tudor dynasty established by the Welsh usurper, Henry Tudor (later Henry VII).
3. Which American colonial outpost was named after the first Stuart monarch?

Unlike in the days of Greece and Rome, when colonialisation was often state sponsored, the establishment of British colonies in the 16th century was driven by commercial interests and very little Crown money. Jamestown was the first successful outpost because it made its creditors money: the tobacco craze was just beginning (as the Beatles later quipped: "I reach for another cigarette / And curse Sir Walter Raleigh / He was such a stupid git!")
4. This man is the one whom historians consider to have been the last British monarch to exercise "absolute rule": __________

Charles I persisted in the widely held belief that monarchs had a "divine right" to rule and the authority to rule as they saw fit. This was all very well for the European Continentals, but a political culture had jelled in England (from the days of the Saxon Witan through to the signing of Magna Carta) that had ultimately deposited a great deal of power in the institution of Parliament. Opposition elements used the legitimacy of Parliament to provoke the King and drum up support for their cause. In point of fact, the average Englishman was likely a soft Royalist, but Charles' faction lost out to the combination of big money (all the large coastal towns and London where merchants were entrenched fought against the King) and religious fervour (hardcore Protestants, known as Puritans and Dissenters, opposed the King's attempts to strengthen the Church of England).

Regardless of which party one considers to have been in the wrong, Charles did act very foolishly first by failing to understand the unique political culture that had developed in England and second by failing to compromise at all with the moderate Parliamentarians, which allowed the hawk faction of Pym and Cromwell to dominate the Roundhead cause.
5. This Scottish man, though massively outnumbered, trounced the anti-Royalist Scots with his motley collection of Highlanders and Irishmen until finally defeated and killed:

Montrose was a great Royalist hero who won some truly remarkable victories during the Civil War. Initially he had been a Conventanter (sworn to defend the Scottish Presbyterian Kirk against the incursion of high Anglicanism) and had taken arms against Charles, but when it became clear to him that the men behind the scenes who controlled the Convenating movement weren't interested in matters of religious doctrine as much as they wished to destroy the legitimate King, he switched sides.

His most ferocious enemies were the Clan Campbell (my own family clan!) while his most staunch supporters were the Clan MacDonald. The animosity between the two was etched into the fabric of history forever during the Massacre of Glencoe.
6. This man was the leader of the most extreme anti-Royalists in Parliament before his death early in the Civil War:

Pym was a firebrand who persuaded Parliament to reject ideas of peace with the King even after it became apparent that support for their cause was far smaller and more restricted than they had previously assumed.

He was the King's most bitter opponent in the House prior to hostilities, and he was one of the men the King would have liked to have arrested in the House, but who escaped, prompting Charles to quip: "I see all my birds have flown!".
7. This dashing German cavalryman was the right-arm of the King during the Civil War:

Rupert was an impetuous, courageous man, whose only fault was a lack of discipline. His cavalry charges were seldom beaten back, but the nasty side effect was that his troopers would pursue the fleeing troops directly in front of them for miles (or would pillage the enemy's camp) whilst the remaining unrouted Rebels were either withdrawing in order or winning the day.

He was less successful in holding cities against Parliamentary sieges, though he did contribute much to the understanding of 'speed warfare' with his lightning marches from one end of the country to the other.
8. This, the last great battle of the Civil War, is said to have cost the King his head:

The end of the battle ended the King's hopes for a military victory in England. He promptly began negotiating with the Scots, who he convinced to invade England to support his claim. Cromwell was none too pleased about these connivances, so he had his troops throw together a "Rump Parliament" (by excluding all known moderates and Royalists) that could be convinced to execute the King, kangaroo court style.

The grace and nobility with which Charles bore the indignity of being tried and later beheaded publicly did much to fuel Royalist feelings and sympathies. Had he ruled as wisely and as well as he died perhaps history would have been quite different.
9. In the aftermath of this battle, the Stuart claimant to the throne was forced to take refuge in a tree (hence the popularity of the pub name Royal Oak). Which battle?

Charles II's army of Royalists and Scots was defeated at Worcester in 1651. He fled to fight again another day. As it turned out he didn't need to. The people and much of Parliament soon tired of the oppressive rule of the regicides.

St. Albans was the bloodiest battle of the Wars of the Roses. Tippermuir and Inverlochy were both Civil War battles won by Montrose.
10. Two disasters hit London during Charles II's reign: _________ and ________ .

London was ravaged first by the plague in 1665 (the last great wave of disease to affect the capital). The plague raged until another disaster, the Great Fire, swept through the city in 1666.
11. In the year after the Great Fire, England was threatened by which European Power?

In an act of outrageous daring the superb Dutch navy sailed right up the Thames Estuary in 1667, sinking ships and displaying their ability to threaten London. A peace was hastily concluded with the Dutch in July of the same year. Bad things come in threes!
12. This man, who had preserved the reigning Stuart's throne by defeating a rebel army at Sedgemoor, later sealed the monarch's fate by defecting (along with his officers) to a foreign invasion force. What was his family name, his surname?

John Lord Churchill, Earl (and later Duke) of Marlborough, defected after sensing the political mood of the country. He went on to become one of history's most successful generals, but throughout his early campaigns he kept up a secret correspondence with the man whom he had betrayed. Marlborough was a Tory not a Whig, and his sympathies for the exiled monarch were clear.
13. This political faction supported the claim of William of Orange and his wife, Mary Stuart:

A tricky one I suppose, because the Whigs were in favour of constitutionally entrenching the powers and supremacy of Parliament. The Tories and the Jacobites were one and the same, really. Jacobites were extreme Tories who supported the legitimate claim of the exiled James II and his successors. Moderate Tories agreed that legitimacy passed to the possessor of the throne, so they supported William and later the Hanovarians (thought they did so with protest).
14. The Stuarts were the last ethnically British Royal House.

The Stuarts, though as intermarried as all Royal families were with various Royal Houses, were the last truly British Royal dynasty. With the death of Queen Anne the throne passed into the hands of the Hanoverian Kings and continued on into the hands of the House of Saxe-Coburg (renamed Windsor for political reasons during the Great War).
15. What famous treaty was signed during Queen Anne's reign?

Utrecht ended the war so successfully pursued by the invincible Marlborough. Its terms were disappointing considering Marlborough was driving on Paris with plans to water his horses at Versailles, having already cracked Vauban's defensive fortresses like nuts and having routed every army that dared face him.

The Peace of Paris ended the Seven Years War. I made the other two up.
Source: Author brutus_cassius 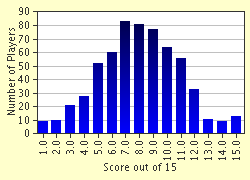 
Other Destinations
Explore Other Quizzes by brutus_cassius