U People Confuse Me Trivia Quiz

These people all have surnames that begin with the letter U, but I became confused and mixed them up. Your task is to sort out who does (or did) what. Note that descriptions are gender-neutral.

Florentine painter Paolo di Dono (1397-1475) received the name "Uccello" from his love of painting birds, as one of the meanings of that Italian word is "birdlike". His depiction of "The Battle of San Romano" (1432) is held by the National Gallery in London (U.K.) and another of his works, a panel containing a self-portrait is in the Louvre in Paris.

Many of his works, including a number of frescoes, have not survived the ravages of war and time.
2. Ernst Udet

Born in 1896, Ernst Udet was Germany's second highest scoring ace (after Manfred von Richthofen) in World War I. At just over five feet tall, he had been rejected by the army, but his small stature did not prevent him from excelling in the air. In the 1930s he joined the new Luftwaffe and rapidly rose in rank, but in 1941 he committed suicide, though the propaganda machine attributed his death to an accident whilst testing a new aircraft.
3. Walter Ulbricht

Walter Ulbricht (1893-1973) was the leader of the German Democratic Republic (East Germany) from 1960 until his death in 1973. After serving, without distinction, during WWI, he joined the Communist Party in the 1920s, fleeing Germany when Hitler came to power in the 1930s.

He spent time in Moscow and in Spain during its civil war, returning to Germany in 1945, becoming deputy prime minister of the eastern zone in 1949, and Head of State (chairman of the council) in 1960.
4. Bjorn Ulvaeus

Bjorn, born in Gothenburg, Sweden in 1945, is one of the Bs of the music group ABBA, the other being bandmate Benny Andersson. The two As are their ex-wives, Agnetha Faltskog and Anni-Frid Lyngstad, respectively. Their 1974 victory in the Eurovision Song Contest was a first for Sweden, and propelled their career towards the superstardom that they eventually achieved.

After the band split up, Ulvaeus and Andersson worked together (with Tim Rice) on the musical "Chess", and in 2013 they collaborated on the anthem for that year's Eurovision Song Contest.
5. Miyoshi Umeki

Born in Japan in 1929, Miyoshi Umeki won the Best Supporting Actress Oscar for her performance in "Sayonara" (1957) as a Japanese woman in love with an American serviceman during the Korean War. Her later career included the movies "Cry for Happy" and "Flower Drum Song" (both 1961), and the housekeeper in TV's "The Courtship of Eddie's Father" (1969-72).

New Zealander Charles Hazlitt Upham was unique in that he was the only man to be awarded the Victoria Cross twice for separate acts of heroism during the Second World War. He was the third person ever to receive a bar to the Victoria Cross, the others having both received their second awards during WWI. Upham received his first VC for gallantry as a Second Lieutenant, during the campaign in Crete in 1941, and his second as a Captain in the Western Desert in 1942.

Despite being wounded, he survived the war, living until 1994 when he was 86 years of age.
8. Harold Urey

Harold C. Urey (1893-1981) was the recipient of the 1934 Nobel Prize for Chemistry for his "discovery of heavy hydrogen", also known as "deuterium". This is an isotope of hydrogen whose main use is in nuclear fusion reactions. Unsurprisingly, Urey was a member of the Manhattan Project which developed the atomic bomb during WWII.
9. Jane Urquhart

Born in 1949 in Little Long Lac, Ontario, Jane Urquhart is an Officer of the Order of Canada (OC-2004) and winner of the Governor General's award for fiction for "The Underpainter" (1997). Her other works include "The Stone Carvers" which was longlisted for the Booker Prize and "Away" which won the Trillium Book Award.
10. Jorn Utzon

Dane Jorn Utzon (1918-2008) is probably most famous for his design of the Sydney Opera House, even though he resigned as its architect before the project was completed. His other work includes the Melli Bank in Tehran, and the parliament buildings in Kuwait, as well as a small number of buildings in his home country. Honours bestowed upon him have included the Sonning Award in 1998 and the Pritzker Prize in 2003.
Source: Author spanishliz 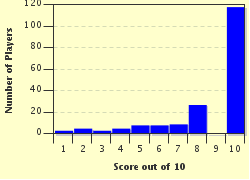 Related Quizzes
This quiz is part of series ABC of Quizzes:

Inspired by a thread on the chat boards awhile ago, I've finally got at least one quiz with a title starting with each letter of the alphabet. For those where I have more than one qualifying title, I've chosen at random.