Here we'll examine the biblical passages (King James Version) that mention the number, the mark and the name of the beast and some of the more interesting interpretations of these passages.

Quiz Answer Key and Fun Facts
1. According to a literal reading of the Book of Revelation (King James Version), what does the number of the beast signify?

Three items are mentioned here - the mark, the name and the number of the beast, with the latter being 666. Some sources interpret all three to mean the same thing - the mark of the beast. Other sources maintain that they are three different things, with the name and number being used to identify the beast, and the mark being something completely different.

Incidentally, people have tried to assign the number 666 to dates (such as the death of Pope John Paul II) and locations (such as the coordinates of Jerusalem).
2. According to the Book of Revelation (King James Version), where will the mark of the beast be placed?

Revelation 13:16 states that the mark will be "in their right hand or in their foreheads", while Revelation 14:9 states "in his forehead or in his hand", and Revelation 20:4 states "upon their foreheads or in their hands". The use of "in" versus "upon" has led to some interesting interpretations, with some sources believing that the mark will not be literally visible on a person but rather held in the hand or kept as knowledge within the forehead.
3. Some sources maintain that the biblical beast was actually a Roman emperor. Which name in particular is mentioned?

The number 666 is believed by some biblical scholars to be a code for the Roman Emperor Nero, who was brutally oppressive towards Christians. He was also alleged to issue certificates (marks) to those people of whom he approved, and those without such certificates were prevented from participating in commerce. A literal reading of Revelation 13:17 supports the idea that numbers were used for a name and that the mark was needed to participate in trade: "And that no man might buy or sell, save he that had the mark, or the name of the beast, or the number of his name."

Numbers were assigned to Greek and Hebrew letters, and summing the numbers resulted in a value for a name. In Nero's case, his name in Greek totaled 666. However, the numbering of letters has also been creatively used to indicate others throughout the ages including Martin Luther, Adolf Hitler and Henry Kissinger.
4. Some sources believe that the biblical mark of the beast will be a combination of a physical mark with numbers. What commonplace identification mark, first used in the 1970s, has been suggested?

The barcode became a popular candidate for being the mark of the beast because it was both a mark and a number and because it was tied to commerce, as indicated in Revelation 13:17: "And that no man might buy or sell, save he that had the mark, or the name of the beast, or the number of his name."

Barcodes work by assigning shapes or lines of different widths to each number. Some sources maintain that the "guard bars" (the lines on the ends and the middle of the standard Universal Product Code (UPC) barcode) are the code for the number 6; hence, every barcode contains 666. In actuality, the symbol for the number 6 is similar (even the barcode developer, George Laurer, admits this on his website), but it isn't exactly the same as the guard bars.
5. The sixth letter of the Hebrew alphabet, Waw or Vav, has been used by some sources to indicate the biblical name of the beast. What do they believe is signified by 666?

Using the "Waw" name for the sixth letter of the alphabet, some sources claim that 666 equals WWW - the World Wide Web (although in modern Hebrew, the sixth letter is pronounced as a "v"). This would require using a literal interpretation of the mark being "in his forehead or in his hand" - knowledge and access rather than a physical mark. Technology has frequently been viewed suspiciously by those searching for the meaning of 666.

For example, the first Apple computer, Apple I, sold for $666.66, and Intel's Pentium III had a clock speed of 666.666 megahertz.
6. Which of these items, which generally appeared in the mid twentieth century and which is now used widely for commerce, is believed by some sources to be the biblical mark of the beast?

Credit cards and later, debit cards, fit the "in the hand or in the forehead" requirement as they would be held in the hand, and the account number would be memorized in the forehead. The VISA credit card, in particular, has been mentioned as a candidate for 666. Allegedly, the letters that make up "VISA" are the symbols for "6" in the Roman (VI), Greek (S) and Babylonian languages (A).
7. Another candidate for the mark of the beast is an item that was first patented in the 1970s to be used both for commerce and to store personal information. Which of the following inventions has been suggested to be the biblical mark of the beast?

Smart cards are similar to credit or debit cards as they can be used for monetary transactions. However, the cards also contain computer chips which can be used to store personal information, such as medical and financial records. A type of smart card that has been touted in the United States is a national identity card which would be mandatory for all citizens.

Some sources maintain that this fits the definition of the mark of the beast presented in Revelation 13:17: "And that no man might buy or sell, save he that had the mark..."
8. Which item, first developed in the mid twentieth century and commonly used for animal identification, has been suggested by some sources to be the biblical mark of the beast?

A microchip is a passive RFID (radio frequency identification) device that contains a unique identification number which can be read with a scanner. Some sources believe that, besides being used for identification, they will be used to store information and as a tracking device and that microchips will be required for commerce transactions.

Incidentally, brands have also been suggested as the mark of the beast; however, they have been around for centuries.
9. Of course there's a name for it: What is the fear of the number 666?

The literal definition is the fear of the number six-hundred sixty six. A famous example of hexakosioihexekontahexaphobia was when Ronald and Nancy Reagan had their Bel Air, California home address changed from 666 St. Cloud Road to 668 St. Cloud Road.
10. Quite a few biblical scholars believe that the number 666 was not the number originally mentioned in the Bible. Which number do they believe is the true number of the beast?

The basis for this belief is that several early copies and in fact, the earliest known fragment of the Book of Revelation, Papyrus 115, list 616 as the number of the beast rather than 666. A second-century church scholar, Saint Irenaeus, maintained that the discrepancies were due to errors by scribes. Biblical scholar Dr. Paul Lewes believes that "the number 666 has been substituted for 616 either by analogy with 888, the [Greek] number of Jesus... or because it is a triangular number, the sum of the first 36 numbers (1+2+3+4+5+6...+36 = 666)".

Interestingly, the number 616 still works out to the number of the Roman Emporer Nero if his Latin title is used rather than his Greek title (which works out to 666).
Source: Author PDAZ 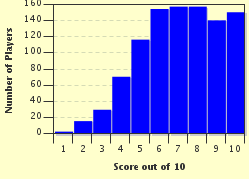 Related Quizzes
This quiz is part of series Commission #4:

And now, a by-the-numbers review of all of the quizzes submitted to our fourth Commission in the Author's lounge, all of which involved numbers in some way and started in September 2009.