In the Bible, a number of ordinary people found themselves raised from the dead. In that way they received a second chance at life. Quotations are from the Revised Standard Version.

Quiz Answer Key and Fun Facts
1. In 2 Kings 4, the prophet Elisha told a Shunammite woman that she would bear a son. When that son was born and grew up, he came to his father complaining of pain. What part of his body hurt?

In 2 Kings 4:19 the son said to his father, "On, my head, my head!" Taken to his mother, he died at noon, setting the stage for Elisha's miracle.
2. When Elisha raised the Shunammite's son to life, what was the first sign that life was returning to him?

Elisha shut himself up in the room with the dead boy and prayed (2 Kings 4:33). He stretched himself over the boy until "the flesh of the child became warm." When the boy opened his eyes, Elisha had his servant Gehazi call the mother to come fetch her son.
3. In 2 Kings 13:20 a band of Moabites scared a burial party. The bearers threw the dead man into Elisha's grave. As his body touched the prophet's bones, the newly-dead man returned to life. What prominent Biblical woman was also a Moabite?

Ruth's story is told in the Biblical book named after her. Born in Moab, the widowed Ruth accompanied Naomi to Judah and eventually married Boaz. Their son Obed was King David's grandfather.
4. In Matthew 9:18 a man knelt before Jesus with the words, "My daughter has just died, but come and lay your hands on her and she will live." What was the name of the pleading father?

You had to search for the answer in Mark 5 and not in Matthew's telling. Only in the Gospel of Mark was the father named as Jairus, the ruler of the synagogue.
5. In Mark 5, the raising of the little girl was also recorded. When Jesus went inside the house and took the girl by the hand, saying, "Talitha cumi," what did the words mean?


Answer: Little girl, I say to you, arise!

Surrounded by Peter, James, John and the girl's parents, Jesus had only to say two words to recall the girl from the dead. In tender concern, he then told the household to give her something to eat.
6. Through what city was Jesus travelling in Luke 7 when the bier with the body of a widow's only son was carried out by the gate?

The text recorded that Jesus had compassion for the widow. He stopped the funeral procession and said simply, "Young man, I say to you, arise!" (Luke 7:14) As soon as the son came back to life, Jesus entrusted him to his mother.
7. John's Gospel was the only one to mention the raising of Lazarus. He lived in Bethany with his two sisters. What were their names?

In John 11:2 John reminded his readers that Mary was the one wiping Jesus' feet with her hair (even though the tale was only written up in John 12). Another incident at the household was recorded in Luke 10:38, where Martha complained that Mary sat at Jesus' feet instead of helping her with preparations.
8. Jesus called Lazarus out of the grave after he had been dead for four days. His words were: "Lazarus, come out!" (John 11:43) What did the chief priests wish to do with/to Lazarus?


Answer: Have him killed

Crowds flocked to see the man raised from the dead. Because of the miracle, many believed that Jesus was the Messiah. John 12:10 commented that the priests planned to kill Lazarus.
9. In Acts 9, Peter came to the city of Lydda. A woman in nearby Joppa had just died. Peter knelt and prayed before bringing her back to life. What is the meaning of her names Tabitha (in Aramaic) and Dorcas (in Greek)?

Tabitha/Dorcas is described as being "full of good works and acts of charity" (Acts 9:36). Two men from Joppa came to fetch Peter in Lydda. A group of widows showed him the garments she had made. Peter stayed alone with the body in the upper room and then simply told her to get up. She opened her eyes.
10. Paul's record-breaking sermon of about twelve hours was written up in Acts 20. A certain young man could not keep his eyes open for the duration of it. Nodding off to sleep, he fell from the window into the street below. Who was pronounced dead?

When Paul heard the commotion, he went down below, bent over the body, laid hands on him and restored him to life. Then Paul took a meal and continued to preach (Acts 20:11).
Source: Author sterretjie101 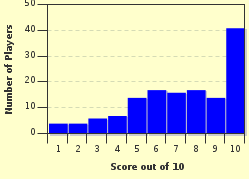 
Other Destinations
Explore Other Quizzes by sterretjie101