I Know Who Killed Me Trivia Quiz

Death is a part of life, but these Biblical deaths weren't by natural causes. KJV was used.

Abner had killed Joab's brother, Asahel, in the battle at Gibeon. In revenge of his brother's murder, Joab killed Abner. To Abner's death, David replied, "Know ye not that there is a prince and a great man fallen this day in Israel."

In the Jewish "Book of Antiquities", Josephus writes that Joab was jealous of Abner because he had found favor in the eyes of the King and so Joab had Abner killed.
2. How did David have Bathsheba's husband, Uriah, killed in 2 Samuel 11?


Answer: Put him at the head of battle

When David realized he wanted Bathsheba, he had Uriah put at the head of battle on the intent that the man would be killed. Uriah was killed and David married Bathsheba.
3. The first murder in the Bible was fratricide. Abel killed Cain out of jealousy.

Cain was the first born of Adam and Eve. His brother Abel was born later. Cain grew up to be a farmer while Abel tended sheep. When it was time for a sacrifice to God, Abel brought a sheep while Cain brought fruit and vegetables from his garden. God was pleased with Abel's sacrifice, but disliked Cain's sacrifice. One day out of jealousy, Cain killed Abel. God branded him and sent him out into the world.

The story of Cain and Abel can be found in Genesis 4.
4. Who killed King Saul in I Samuel 31?

So King Saul wouldn't be captured by the Philistines he killed himself by falling on his sword. An Amalekite saw King Saul's body and took the blame for his death. Because of this admission, David had the Amalekite killed. Saul's body was burned at Jabesh-Gilead.
5. How many stones, in I Samuel 17, did David use to kill the giant, Goliath?

David gathered five stones from a brook, but in the end he only used one stone and his slingshot to kill Goliath. After Goliath fell to the ground, David used Goliath's sword to cut off the giant's head. Goliath was reported to be nine feet tall.
6. With what object did Jael kill Sisera in Judges 4?

Sisera was an evil Canaanite leader who ruled over Israel for twenty years. When Sisera's men were attacked, he fled to the tent of Jael, wife of Heber. Jael gave Sisera refuge for the night. While Sisera slept, Jael used a hammer to drive a tent peg into Sisera's skull. Sisera's death was foretold by Deborah, the prophetess.
7. Who asked her stepfather for John the Baptist's head as a gift in Matthew 14?

Job's children were having a meal in the oldest son's home when a great wind knocked the house down and all of them were killed. This was the fourth bad thing that was revealed to Job while he was away.
9. What object did Ehud use to kill Eglon in Judges 3?

Ehud was a judge who fought against King Eglon. One day when Ehud brought the annual tribute to King Eglon he asked to speak with him privately. While alone, Ehud drove a dagger into the fatty part of King Eglon's stomach. Afterward, Ehud locked Eglon in the room so everyone would think he wanted to be left alone and Eglon could die without someone trying to save him.
10. David's son, Absalom, committed suicide by hanging himself from a tree.

Absalom was riding away from a battle in Ephraim when his long hair got caught in an oak tree and he was unable to get loose. When Joab, David's commander, heard that Absalom was stuck in a tree Joab went to Absalom. While David's son hung from a tree, Joab drove three spears into his heart. Absalom's death can be found in 2 Samuel 18.
Source: Author pennie1478

This quiz was reviewed by FunTrivia editor LeoDaVinci before going online.
Any errors found in FunTrivia content are routinely corrected through our feedback system.
Most Recent Scores
Jan 17 2023 : Guest 99: 9/10
Dec 23 2022 : Guest 174: 10/10 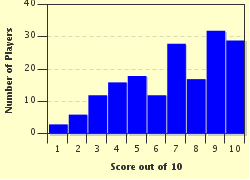