Biblical Deaths - How Deadly Accurate Are You? #2 Quiz

This is my second quiz based on the theme of deaths of Biblical characters. The first installment generated lively action and I hope the trend continues. (The NIV was used for this quiz.)

Quiz Answer Key and Fun Facts
1. Which one was the king who died from injuries after falling through an upper room lattice?

Ahaziah is the correct answer. Scripture states he died after serving two years as king of Israel without leaving a heir. As a result, Ahaziah was replaced by his brother Jehoram. Much of Ahaziah's story is told in the first chapter of 2 Kings. When Elijah the prophet proclaimed the king would die from injuries sustained from his fall through the upper room lattice, Ahaziah attempted to capture the prophet. Two military units sent to capture Elijah met their doom, however, when the prophet called down fire from heaven. True to what Elijah said, the king died from his injuries. (Incidentally, this king is not to be confused with a king of Judah named Ahaziah, who ruled for one year.)
2. Which one was assassinated when Jael drove a tent peg through his head?

Canaanite leader Sisera was the one to die the unusual death. Scripture states Sisera hid in the tent of Heber and after he fell asleep, Jael killed him by driving a tent peg through his skull. Jael's actions are celebrated in the Song of Deborah (Judges 5:24-27). Sisera had sought refuge in the tent after his stinging defeat by the Israelites under the leadership of Deborah and Barak.
3. Which one was buried by his sons Isaac and Ishmael?

Abraham, of course, is the correct answer. Genesis 25:9-11, states Isaac and Ishmael buried Abraham "in the cave of Machpelah near Mamre, in the field of Ephron son of Zohar the Hittite." The field had been bought by Abraham from the Hittites and he was buried with his wife Sarah. According to Scripture, Abraham was 175 years old when he died.
4. Which one was taken up to heaven and didn't die a natural death, according to Genesis 5:24?

Enoch is the correct answer. Genesis 5:22-24, in the NIV Bible, states: "After he became the father of Methuselah, Enoch walked faithfully with God 300 years and had other sons and daughters. Altogether, Enoch lived a total of 365 years. Enoch walked faithfully with God; then he was no more, because God took him away." In other words, he did not die, but was taken away by God, similar to Elijah.

Incidentally, Hebrews 11:5, in the New Testament, has this to say about Enoch and his departure: "By faith Enoch was taken from this life, so that he did not experience death: He could not be found, because God had taken him away. For before he was taken, he was commended as one who pleased God." According to Wikipedia, Enoch means initiated, dedicated and disciplined.
5. Which one was 969 years old when he died?

Abel is the first person have his death reported in the Bible, in Genesis 4:8. Scripture states Cain killed Abel out of jealousy, as Abel's offerings were more pleasing to the LORD. They were both sons of Adam and Eve. After Abel's death, Scripture reports Eve gave birth to another son, Seth.
7. Which one was the daughter of Jairus and was raised from the dead?


Answer: No name is given

No name is given for Jairus' daughter who was raised from the dead by Jesus. It's one of my favorite stories in the Bible. The account appears in Mark 5:21-43 and Luke 8:40-56.

In both accounts, it tells of people weeping for the dead girl outside her home. When Jesus appeared and stated the girl was not dead but was simply sleeping, the 'mourners' laughed at him. A few moments later, however, their laughter turned to total amazement when Christ raised the girl from the dead.

According to Mark 5:41, Jesus said, "Little girl, I say to you, get up!" And she did just that! It's interesting to note that Jesus used almost the same words as when he raised the widow's son from the dead at Nain. In Luke 7: 14 in the NIV Bible, Jesus said eight words to the widow's dead son: "Young man, I say to you, get up!"
8. Which king was struck down by an angel of the Lord because he did not give praise to God?

Herod is the correct answer. His death is recorded in Acts 12:21-23. We read in the NIV Bible: "On the appointed day Herod, wearing his royal robes, sat on his throne and delivered a public address to the people. They shouted, 'This is the voice of a god, not of a man.' Immediately, because Herod did not give praise to God, an angel of the Lord struck him down, and he was eaten by worms and died." Herod was a ruthless opponent of the early church and his death was seen as divine retribution. Notes in the NIV Study Bible state: "The historian Josephus describes a silver robe, dazzling bright that Herod wore that day.

When people acclaimed him a god, he did not deny it. He was seized with violent pains, was carried out and died five days later."
9. What husband-wife team were struck dead for withholding money from the early church?

Ananias and his wife Sapphira were struck dead about three hours apart when they claimed they had turned all the proceeds of the sale of their property over to the early church, but had secretly kept some for themselves. They made the claim to Peter, one of the original 12 Disciples. According to Acts 5:11, in the NIV Bible, "great fear seized the whole church and all who heard about these events."
10. Which woman was raised from the dead by Peter?

In other words, the body was prepared for burial. It's interesting to note Peter sent all the people out of the room before he prayed, and according to Scripture, he simply said only three words: "Tabitha, get up".
Source: Author Cowrofl 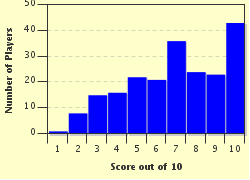