Christianity and the Bible in Threes Quiz

This quiz will present questions related to Christianity and the Bible, with the number three being the driving force.

Quiz Answer Key and Fun Facts
1. I'll start with a fairly straightforward question. While the Trinity is never officially laid out in the Bible, it has become a fundamental doctrine of Christianity. Which group of three entities is typically described as making up the Christian Trinity?

Tertullian is most commonly given credit for first coining the term or using it in reference to this idea. Most Christian denominations believe in the idea of the Trinity though it is often difficult to understand how the three are separate while being the same. There are some denominations that outright reject the idea of the Trinity.
2. Which group of three books all belong to the Pentateuch?

The Pentateuch are the first five books of the Old Testament, referred to in the Jewish tradition as the Torah. Notice the Latin root word "penta," which means "five." These five books are Genesis, Exodus, Leviticus, Numbers, and Deuteronomy.
3. Which of these books of the Bible has only three chapters?

The other three books all have 5 chapters.
4. By number of words, what are the three shortest books of the Bible?

The five shortest books are:
1. 3 John has 219 words.
2. 2 John has 245 words.
3. Philemon has 335 words.
4. Jude has 461 words.
5. Titus has 659 words.
Notice that they are all in the New Testament. The exact word counts vary from translation to translation.
5. Jesus had an inner group of disciples who experienced several important events that the other disciples did not. Who are these three? (This question could also likely be asked as: which three disciples are mentioned the most in the Gospels?)

For example, when Jesus underwent the transfiguration, "After six days Jesus took with him Peter, James, and John the brother of James, and led them up a high mountain by themselves." (Matthew 17:1, New International Version) Similarly, not long before his arrest, "[Jesus] took Peter, James and John along with him, and he began to be deeply distressed and troubled." (Mark 14:33)
6. The Catholic Church defines seven important sacraments which are important to the life of its followers. Which of these choices lists three that are included in this list?

Each of the incorrect choices includes one non-Protestant denomination such as Catholicism and Messianic Judaism.
8. Which of the following were all either among the 12 original apostles called by Jesus, or chosen by the others as a replacement of the one who betrayed him?

The apostles are listed in Matthew 10:2-4, Mark 3:16-19, Luke 6:13-16, and Acts 1:13. The four lists do not always include the same individuals. Some scholars believe certain apostles went by different names, while others believe that the number 12 is more symbolic representing God's chosen elect as with the twelve tribes of Israel. Either way, the apostles listed are no doubt the closest of Jesus' many followers.
9. The visit of the Magi or wise men following the birth of Christ is mentioned only in Matthew with no mention as to their number. However, the Western Christian church has traditionally given three names to these nativity figures. What are the three names these mysterious figures are known by?

These names are based on two Greek manuscripts, not a part of the Bible. Jeroboam, Ahaziah, Joash, Baasha, Jehoram, and Menahem are actually all monarchs who ruled over either Israel or Judah, as relayed in the books of Kings and Chronicles in the Bible. Asher, Nephtali, and Zebulun are three of Jacob's sons as relayed in the Bible.
10. There are three primary patron saints for the country of Italy. Which of these is not one of them?

Michael is actually a patron saint of England, along with George. Italy also counts the Virgin Mary (in her aspects as Our Lady of Loreto, Perpetual Help, and the Snows) among its patron saints.
Source: Author justin_ingels 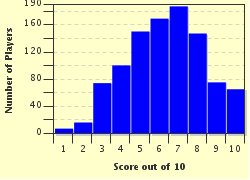 
Other Destinations
Explore Other Quizzes by justin_ingels