Christian churches, particularly the more "formal" mainline denominations use objects with names that are not ordinary. Here are some about which you may have wondered.

Quiz Answer Key and Fun Facts
1. What is the name for the incense burner that is often swung around on a set of chains?

Some people refer to using incense as "smells". When a church also rings bells during the worship service at particular times, the same people talk about "smells and bells".
2. The person who swings the incense burner is called a:

From this question and the previous one you have probably made the connection that the root of both "thurible" and "thurifer" is "thur". "Thur" means incense.
3. Some people suffer severe reactions to incense.

Whether it is the scent of incense or the smoke, there are people who can have intense reactions to the burning incense, including asthma attacks. Most churches which only use incense occasionally will be sensitive to the issue.
4. What is the proper name for the goblet into which wine is poured for the sacrament of Holy Communion?

The origin of the word "chalice" traces from English to Old French to Latin and back to Greek. The root of the word means "cup".
5. The reading of the "gospel" during a worship service may include a reading from any of the following books:

The four gospel books which are the first four books in the New Testament are: Matthew, Mark, Luke, and John. These primarily relate the life of Jesus Christ. Timothy, Philemon, Peter, and Jude are all epistles (letters) in the New Testament and are not gospels.
6. The piece of furniture, often raised, usually used to hold a bible and usually from where a priest or pastor preaches is called:

A Jack-in-the-pulpit flower is named such because it looks (with imagination) like someone standing in a canopied pulpit preaching. The pulpit is sometimes called an ambo when there is no lectern and there is but one "reading desk".
7. The main part of the church sanctuary is also known as a knave.

The correct word is "nave" which, while pronounced the same as "knave", has a very different meaning. In Latin, "nave" means "boat". A church nave ceiling often takes the shape of an upside-down boat.
8. What is the tall cross or crucifix (made tall by being attached to a pole) known as?

A processional cross leads the worship participants in entering the sanctuary or in processing outdoors for specific events. When not being used in a procession, the cross is often set into a standing base or is affixed to a wall at the front of the sanctuary.
9. What is the person called who carries the tall cross attached to a pole?

Crucifer literally means "cross carrier". Some processional crosses are quite heavy and difficult to balance and carry.
10. When a worship leader wears an alb, what is the rope-like thing worn around the waist called?

The word "cincture" means belt or girdle. While many cinctures look like fancy ropes, some are simple bands of fabric.
Source: Author Bzurd 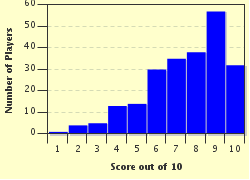 
Other Destinations
Explore Other Quizzes by Bzurd