Join me in a stroll around a typical English country church, looking at the objects - and people - that might be seen in and around the building.

Quiz Answer Key and Fun Facts
1. In many cases, one of the first objects of interest seen by the visitor to an English country church will be the lych-gate, a porch-like gateway giving access to the churchyard. What is the original meaning of the word "lych"?

The name comes from the Old English "lic", meaning a corpse. In the Middle Ages, bodies being taken to the church for burial were placed on a bier under the lych-gate, where the first part of the burial service was read, prior to being taken either into the church or to the graveside itself.
2. Still outside the church, the visitor might look up to the roof and see a grotesque carving of a strange creature with a water-spout protruding from its mouth. What is the general term for this object?

The word gargoyle is believed to derive from the French "gargouille", meaning a throat. In church architecture, a "chimera" or "grotesque" is similar to a gargoyle but is purely decorative - without the practical function of a water spout.

Gargoyles often take the form of demonic or devilish creatures. However, examples do exist that have been carved in the representation of real people, such as members of the clergy at the time when the gargoyle was made.
3. What objects, found in most English country churches but not always visible to the casual visitor, may have been manufactured by companies by the name of Alfred Bowell, Thomas Mears II, and John Taylor (among many others)?

To the casual visitor, the bells are commonly much more audible than visible. Most English country churches will have at least one bell, used primarily to signal the times of church services. Those with five or more bells will often have their own teams of bell-ringers, although sadly some are only chimed mechanically.

Alfred Bowell had a bell-foundry in Ipswich from 1897-1940. Thomas Mears II operated out of the still-working Whitechapel bell-foundry (1810-1844). The Taylor bell-foundry in Loughborough is also still in operation.
4. On entering an English country church, one of the first things the visitor sees may be a font. What would a font normally be used to hold?


Answer: Water - it's for use during the baptismal service

Fonts are not usually kept filled with water except during a baptism or christening. There may indeed be a collection box by the door, but don't worry about your shoes - there is no ban on wearing them in Anglican churches. And churches usually have electric light these days.
5. A Rood Screen is the traditional name for the dividing screen, usually wooden and elaborately carved, between the nave and the chancel of the church. Why was it given this name?


Answer: Rood was the Anglo-Saxon word for a cross, which would be set on top of the screen

Traditionally, the screen would be surmounted by the rood cross itself, usually in the form of a crucifix (a figure of Christ crucified on the cross). In England, most of the original mediaeval crosses were torn down during the Protestant Reformation in the sixteenth century, although the screens were more often left in place. Most of those that remained were destroyed during the Commonwealth, when the Puritans had a field day removing stained glass windows, silver and gold plate, statues and anything else they decided was "Papist".
6. By the altar, the visitor may see an object known as a thurible. What exactly is this used for?

The thurible, which is carried by a person known as the thurifer, is usually hung from a metal chain which allows it to be swung to and fro at the appropriate points in the service.

The burning of incense in this way is more common in those Church of England parishes of a relatively "high church", or Anglo-Catholic, persuasion.
7. The visitor may also wish to view the reredos, examples of which are often elaborately decorated. But where in a church would you look to find this object of interest?


Answer: Behind the altar - it's a decorated screen

The reredos often takes the form of a wooden carving, although it can be of stone, painted wood, tapestry or mosaic.
8. The visitor will often notice thick cushions, often beautifully hand-decorated in needlework, hanging from the backs of the pews. Known as "hassocks", what is their intended purpose?


Answer: For the congregation to kneel on whilst at prayer

In many English country churches, hassocks have become primarily decorative, as congregations often prefer to employ the "Church of England crouch" when praying. This involves bending at the waist while still seated and staring at the back of the pew in front, rather than actually getting down on the knees.

Regular churchgoers may have seen hassocks being used as cushions, or for toddlers to stand on - but that is not what they are supposed to be for!
9. Churches don't run themselves, of course, and a number of people will be involved in their daily business. But which of the following would you NOT expect to find involved in the day-to-day life of an English country church?

A Bishop would normally have oversight over a diocese including a great many individual churches, and would not be involved in their daily business, although he may attend for special services, such as Patronal festivals, or to administer the sacrament of confirmation.

On a day-to-day basis, the vicar and his curate (assistant) would look after the spiritual aspects of the church's business, while the churchwardens (who are normally lay members of the congregation) would be responsible for the maintenance of the building and its contents.
10. If the visitor is able to gain entry to the vestry, he or she will usually find an assortment of vestments and other items worn by the clergy and other church officials during the services of worship. But which of these is NOT an item of clothing normally worn by Church of England clergy?

A colobus is not commonly found in English churches, being a species of African monkey. A chasuble, on the other hand, is a sleeveless garment worn over the cassock (an ankle-length robe), and a stole is a band of cloth worn around the neck, with the loose ends hanging down in front.
Source: Author stedman 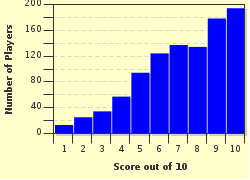