All the words in this quiz are taken from the Oxford Dictionary of the Christian Church. I'll give you the definition, and you'll give me the word. Bless you!

Quiz Answer Key and Fun Facts
1. Definition: The formal act of a priest or bishop pronouncing the forgiveness of sins by Christ to those who are qualified by penitence to receive it.

There are two methods of absolution - the indicative and the precatory. In the indicative, the absolver uses such formulae as "I absolve you (or thee)", whereas in the precatory, the priest or bishop prays formally that God will forgive a person or a congregation.
2. Definition: The washing of fingers and vessels after the Communion.

There was a time when this ecclesiastical chore fell to the Celebrant. Nowadays, the lay Communion administrants, sacristan, acolytes or others who are part of the eucharistic team perform this office.
3. Definition: The central content of the Christian revelation, the glad tidings of redemption.

In his words, "It was as though they had pushed Jesus back into the tomb rather than celebrating the resurrection!" He wanted to create something that would express the joy of Easter.

At one time, Tebelak had thought of entering the Episcopalian (Anglican) priesthood before the theatre bug bit him. 'Godspell' was originally presented at Carnegie-Mellon, and, later, Stephen Schwarz, who wrote the score and the lyrics (all except for 'By My Side' which was written by two of the original cast members) and Tebelak mounted the show off-Broadway, where it played over 2,000 shows.

It graduated to Broadway proper and ran for 527 performances. Since then, 'Godspell' has hit the stage in every part of the world, it seems. Trivia Note: The lyrics for the song 'Day by Day' are borrowed from the Prayer of St. Richard of Chichester (1197-1253) - "O Holy Jesus, most merciful Redeemer, Friend and Brother, let me know you more clearly, love you more dearly, and follow you more nearly, day by day." - which just happens to be one of my favourite prayers.
4. Definition: Ritual or ceremonial directions printed at the beginning of service books, or in the course of the text.

The name originates from Latin ruber, meaning red, because in mediaeval books (and indeed in many prayer books in use today) the directions are given in red ink, to distinguish them from the text. The clue? "Do the name Ruby Begonia mean anything to ya?" was a catchphrase that kept popping up on the old 'Amos and Andy Show'. Dean Martin used to ask the same question every now and then on his TV variety show.
5. Definition: A room annexed to a church or chapel for keeping the sacred vessels and for the vesting of priests and other clerics.

The sacristan is the official who is charged with the care and keeping of the contents of a church, particularly the vessels and items used in worship - the chalices and patens, the wine and water flagons and cruets, lavabos, the processional cross, the thurible, the candleholders, etc., the offertory plates, flower vases, candlesnuffers, etc. - in short anything that needs polishing or cleaning.

He or she is in charge of the sacristy.
6. Definition: The washing of the celebrant's fingers prior to the consecration of the Eucharistic elements.

Lavabo is Latin for "I will wash". Before the priest handles the bread and the wine to be consecrated for Communion, the sacristan or an acolyte will offer him or her a small bowl of water. The priest will dip his or her fingers in the bowl, and dry them on a special towel, usually draped over the sacristan's arm. Nowadays, the term has come to be applied to the bowl itself and it is referred to as the lavabo.

In these days of bacteria-consciousness, many churches have substituted an anti-bacterial gel for the water in the lavabo.
7. Definition: The outermost garment worn by priests and bishops in celebrating the Eucharist, and rarely at other times.

The chasuble is derived from the paenula or planeta, the outer, usually hooded cloak, worn in the Greco-Roman world. Chasubles have no hoods, however. They are seamless garments, and are worn primarily in the Roman Catholic, Anglican and Lutheran churches in the west.

A similar garment called the phelonion is worn in the eastern church. Why Oscar Wilde as a clue? Think of Canon Chasuble, the delightful clergyman in "The Importance of Being Earnest".
8. Definition: Receptacle for baptismal water, normally made of stone, more rarely of metal.

The name is derived from the Latin for spring of water, fons (also the origin of the word fountain). In the early church, when baptism was by immersion, the font was more like a pool, set into the floor of the church or chapel. The baptismal candidate would stand in the font and water that had been blessed would be poured over him or her. Gradually, as infant baptism became the norm, the font evolved into a basin-like receptacle that stood on a pedestal.

The font is sometimes in a separate room, called the baptistry, but more usually - at least in Anglican and Lutheran churches - it is in an area where members of the congregation can gather to witness the baptism.

Some churches have reverted to full-immersion baptism and have installed baptism tanks.
9. Definition: Letters of the Greek alphabet used in the Christian Church to denote God's eternity and infinitude.

Alpha is the first letter of the Greek alphabet, omega is the last, and defining God by these letters signifies that, for believers, God is the beginning and the end of life and creation. Their use is probably derived from the Hebrew word for truth (which I cannot replicate here because my keyboard does not have Hebrew characters) which is made up of the first and last letters of the Hebrew alphabet.

In the Revelation to John, we read: "I am the Alpha and the Omega," says the Lord God, who is and who was and who is to come, the sovereign Lord of all.(Rev.1:8 NEB)
10. Definition: The long garment, now usually black (formerly of various colours), worn by the clergy.

The cassock originated in the vestis talaris, an ankle length garment that was retained by the clergy when the prevailing fashion moved to shorter garments. Its use was ordered by the Council of Braga in 572 AD. In 1604, the Anglican Canons (the by-laws of the Church of England) forbade beneficed clergy (clergy who were in charge of parishes and living in vicarages) to go out in public "in their doublet and hose, without coats or cassocks". Nowadays, the cassock is worn in public only by Roman Catholic or Anglo-Catholic priests (think Bing Crosby in 'The Bells of St. Mary'), and even then not by all of them.

The Eastern Orthodox rason, the normal dress of clergy and monks, is the equivalent of the cassock. In the Roman Catholic Church, bishops wear violet cassocks, cardinals wear red cassocks, and the Pope's cassock is white.

The cassock is also known as the soutane in the Roman Catholic Church, but soutane doesn't rhyme with hassock, the padded footstool referred to in the clue.
Source: Author Cymruambyth 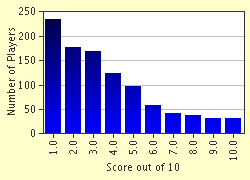 
Other Destinations
Explore Other Quizzes by Cymruambyth