The Baltimore Catechism from 1885-1960's was the main textbook for teaching religion in Catholic Schools. In retrospect, I am astonished at how we learned it page by page, year by year, until we eventually memorized the whole book.

It is good that the term "Divine Providence" was explained by our first grade teacher, in the simple term, as "God's loving care for us". "The "Summa Theologica", by St. Thomas Aquinas, developed the understanding and definition of the doctrine of Divine Providence for Catholic theology.

There is much discussion about the most exact meaning of this term in the theology of many Christian sects. A Dominican Father, Reginald Garrigou-Lagrange, updates Aquinas on Divine Providence, in his book entitled "Providence: God's loving care for man and the need for confidence in Almighty God" (1932).

As a first grade student, "God's loving care" served us well as taught by Sister St. Richard IHM (Sister Servants of the Immaculate Heart of Mary).
2. In Fourth grade, during our spelling lesson, we learned the difference between the words "capital" and "capitol". How surprising to find that capital was also in our catechism in relation to sin! Which of these is not a "capital sin"?

Sometimes called "The Seven Deadly Sins", the "Seven Capital Sins" are: pride, envy, lust, anger, greed, gluttony, and sloth. Sister Cyrinia Marie IHM, our Fourth grade teacher, explained to us that any one of the capital sins could be the foundation of committing a mortal sin which is a grievous offense against the law of God. Sister did further define each word on the list of the capital sins and gave every day examples.

She explained how a capital sin can influence our behavior.
3. In first grade, an early understanding of the word "charity" was explained to us as a synonym for the word, "love". Later we learned "charity" was part of a combination of the virtues, Faith, Hope, and Charity. What is that term which we learned for the virtues Faith, Hope, and Charity?

The term for the virtues of Faith, Hope, and Charity is "The Theological Virtues". You may surmise that in first grade we had no understanding of the word "theological", but we knew we were studying our Catholic faith. We started out with the first question in our "Baltimore Catechism", i.e. "Who made you?". Answer, "God made me". "Hope" was a word we knew, but not in reference to "theology". Our everyday use of the word "hope", was more in the vernacular, as in "I hope Santa Claus brings me...". Later we learned that despair was the opposite of hope and despair was a "sin". Charity, as love, was quite understandable, and love was the basis of what Sister would teach us, "God loves us and wants us to be happy with Him in Heaven".
4. Early on, we learned about "grace", as we knew we received it at our Baptism. Our third grade teacher, Sister Grace Mary IHM, told us that there were two kinds of grace we would learn from our Catechism. What did she tell us the two types of grace were?

Soon to receive the sacraments of Penance and Holy Eucharist, we understood from Sister Grace Mary IHM, that we were to obtain sanctifying grace from those sacraments, just as we did at our Baptism. Baptism, as explained to us, was the removal of original sin from our souls as we became children of God.

Grace, as a gift from God, has various Christian sects interpretations. In the 6th century, St. Augustine of Hippo and Pelagius had a debate that affected the doctrine of sanctifying grace in Western Christianity. As I am not a theologian, I researched what Pelagianism means. Pelagius was a British monk who, in simplest terms, argued with St. Augustine of Hippo that we were born in a state of grace, that original sin did not exist. This is a famous discussion with which some may be more familiar than I. It is a stimulating debate to explore.
5. Now that we knew from our catechism that we received "grace" from the sacraments, we were to learn more ways to help us stay in the state of grace. Into 6th grade now with Sister St. Winifred IHM , who taught us the benefits of the Seven Gifts of the Holy Spirit. Which of the following is not a gift of the Holy Spirit?

Sister explained we were given these gifts at our Confirmation. We were now armed she said with virtues that would help us to lead a good life.
6. A study of a way of life given by Jesus on The Sermon on the Mount, included "Blessed are the Peacemakers, for they shall be called children of God". What are the eight instructions that Jesus gave, commonly called?

Sister Winifred IHM not only made us memorize the Beatitudes, but we spent much time discussing how to apply them in our daily lives.

Today we can sing the hymn, "The Beatitudes" which was written by Peter Kearny, a Catholic Songwriter, who has published fourteen albums of hymns.
7. From Third now to Seventh Grade, and guess who, Sister Mary Grace IHM again! We had learned "The Apostle's Creed", but now we were to dissect all its meaning. Which phrase in the Apostle's Creed means "the union of the faithful on Earth, the blessed in Heaven, and the souls in Purgatory, with Christ as their Head"?


Answer: The Communion of Saints

The Communion of Saints means the union which exists between the members of the Church on earth with one another, with the blessed in heaven, and with the souls in purgatory. It is included in the Apostle's Creed, Sister explains, because it is a tenet of the Catholic Church.

As young students, I do not think we knew that praying for the souls in Purgatory during lent, and making a novena to St. Francis Xavier, as well as praying for ourselves and others was constituting the "Communion of Saints. Living the communion of saints was provided for us each year we attended our grade school.
8. Now that we were aware that "grace" could be obtained in many different ways, Sister Marie Irene IHM explained to us that we were obtaining grace, each morning, afternoon, and before the end of classes. How were we children obtaining grace?

Praying aloud, Sister told us, was another way of obtaining grace. She pointed out that each morning we started class with Morning prayers which we prayed aloud. At lunchtime, the noon bells of St. Dominic's rang, and we stood and recited the prayer, The Angelus". Our day ended with a prayer before leaving the classroom. Sister explained there are two types of prayer, interior and exterior. Interior prayer is when we pray to ourselves, thinking of God.

Interior prayer is a form of meditation. Exterior prayer is when we pray aloud and praise God with our voices either by reciting a prayer together or singing a hymn. Having three special times of prayer during our day, we had much opportunity to obtain grace.
9. Our memory box is really getting full now, as Sister Santa Elisa IHM also explained there were "corporal" works of mercy" which we could also practice. Which of these is not a corporal work of mercy?


Answer: To pray for the living and the dead

"To pray for the living and the dead is a Spiritual Work of Mercy. Jesus gave us The Beatitudes, which exemplify the Corporal Works of Mercy. Others have written their own type of corporal works of mercy. Daniel Berrigan SJ wrote a treatise that he called, "The Ten Commandments for the Long Haul". Pope John XXIII wrote "A Decaloque for Daily Living." John XXIII penned this as a note to remind himself to do a good deed daily. An example of one of Pope John's deeds that he tried to do was, "Only for today, I will do a good deed and not tell anyone about it." Reading his Decalogue Pope John XXIII's simplicity and humility is reflected in what he chose.

The Corporal Works of Mercy are augmented and reinforced by the example of the two authors cited here. Being reminded of good words or actions to live by, Sister explained, is a "good" of and in itself.

A Corporal Work of Mercy was practiced by us during Advent and Lent when we voluntarily gave up some of our "candy money" to put it in the box on the window sill marked "Feed the Hungry."
10. Here we are in 8th grade, ready for June and promotion to high school. Sister James Thomas IHM wants us to remember which word ends the Apostle's Creed. This answer we not only knew in relationship to the Creed but to the final chapter of the Baltimore Catechism. What was that word?

Amen is the Hebrew word for, "so be it". The Apostle's Creed, containing a recitation of the tenets of the Catholic religion is appropriately ended with the word, "Amen". The word, "Amen" is used many times in the Bible. It is used by Jesus when on the Cross, He replies to the Good Thief, Dismas and says to him, "Amen Amen I say to you, this day thou shalt be with Me in Paradise". Considering all we have learned from our Baltimore Catechism, I find this last question fitting to end this quiz which contained only a small amount of questions compared to the very many questions and answers we memorized throughout our years at St. Dominic's.
Source: Author Irishrosy 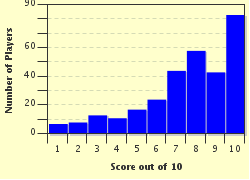 
Other Destinations
Explore Other Quizzes by Irishrosy